The Arcadia University ARC (Art Research Collaboration) Exhibition Program is pleased to announce the presentation of a new gallery exhibition based on the Theater Department’s Spring 2013 puppet production, Alive!. The exhibition, currently on display in the school’s University Commons Art Gallery through December 1, 2013, presents a behind-the-scenes look at the creation of a theatrical performance that explores the boundaries of the art of puppetry. 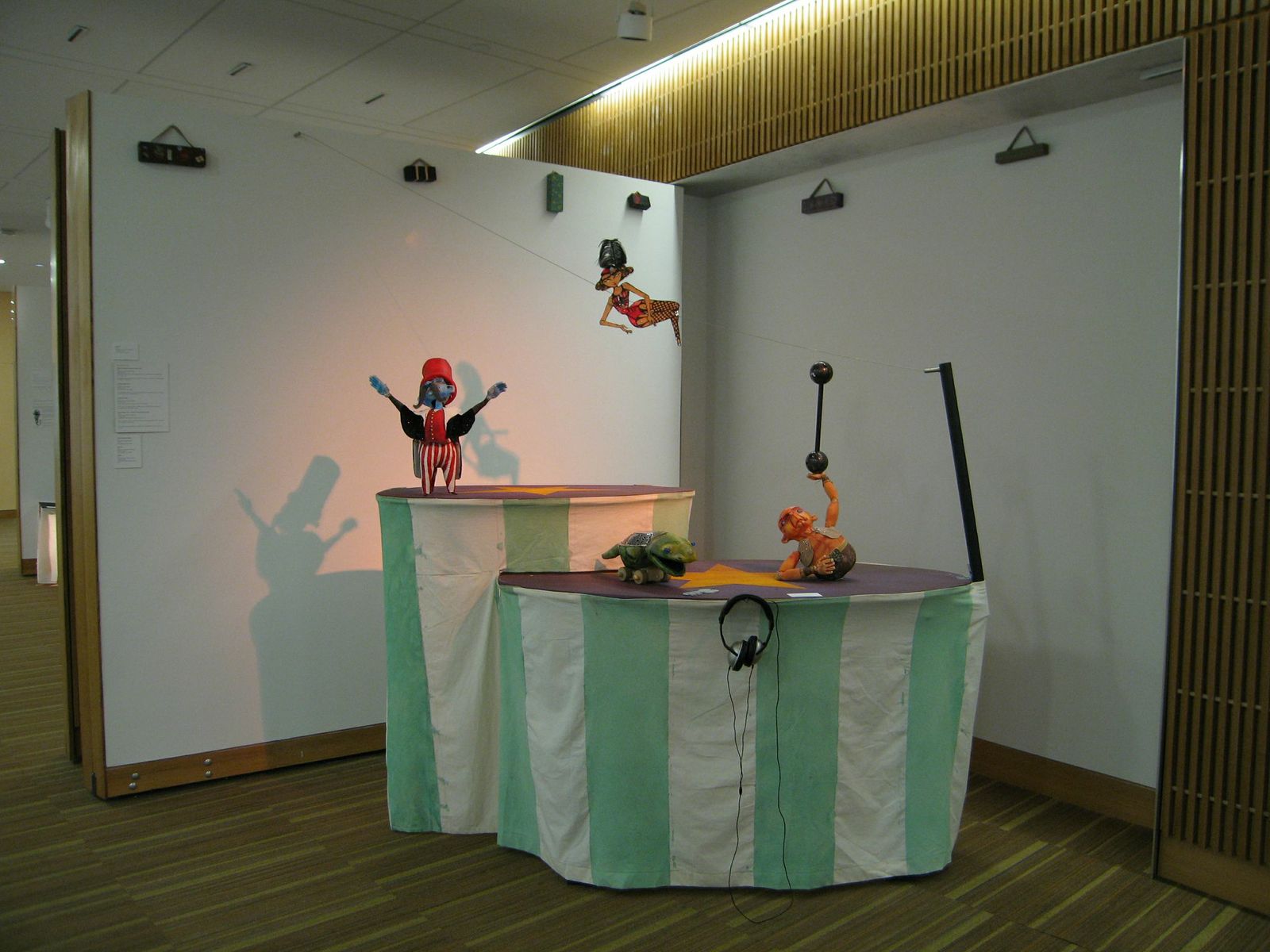 A group of University students under the direction of Alisa Sickora Kleckner (Adjunct Professor, Resident Designer, and Shop Manager for the Department of Visual and Performing Arts) and Scott Cassidy (Technical Director), produced the story, puppets, sets, props, and music for the original production. The story of Alive! follows the exploits of a quirky circus family grown overly reliant on the prognostications of their resident medium, a head in a jar named Pandora, to determine the course of their travels, and what happens when they are faced with the challenge of choosing their own destinies.

Alive! uses the circus and its traditional cast of characters (the ringmaster, the strong man, the fortune teller, the contortionist, the geek, the human cannonball, etc.) as vehicles to discuss the complexities that young adults face as they grow older and their family relationships evolve. As Alisa Sickora Kleckner explains “I think college students are experiencing a significant shift in their family dynamics.  They want to make their own decisions, be treated like adults, guide their own futures, even rebel. Yet there is still a fear to be the true boss of their lives. Consequences really have a new meaning when you suddenly find yourself choosing the course.”

The original production generated positive response from The Kennedy Center American College Theater Festival, which awarded four Certificates of Merit for Excellence in ensemble creation, puppet design, set design, and original music. The show has been submitted for inclusion in the organization’s regional festival. 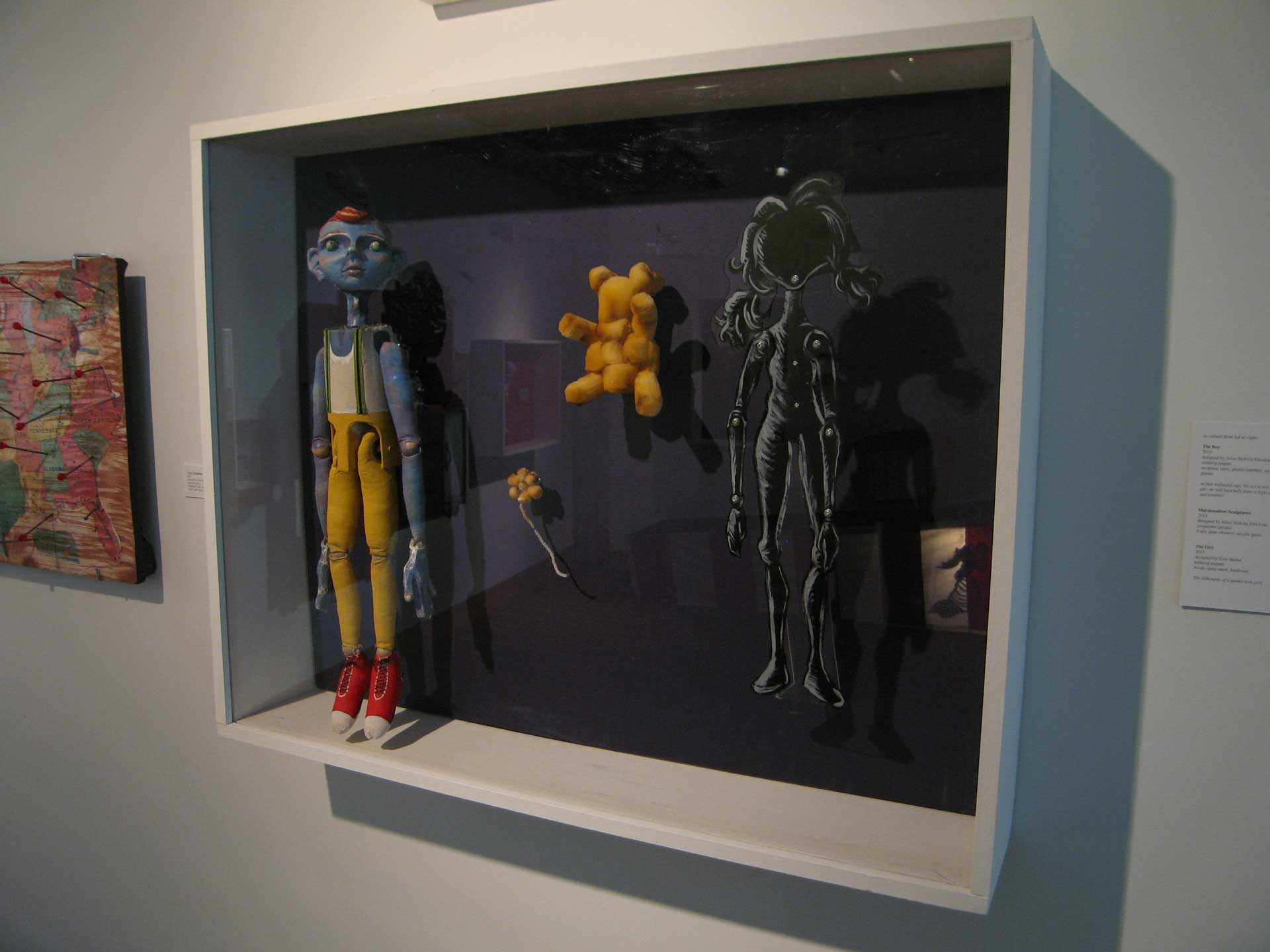 The exhibition focuses on the performance’s utilization of the diverse history of puppetry. On display is the full array of puppets constructed for the original performance, representing a broad spectrum of puppetry traditions. These include tabletop puppets that invoke the tradition of Japanese Bunraku performance, shadow puppets with ancient roots in southeast Asia, as well as glove or hand puppets commonly associated with the single hidden performer “Punch and Judy” style shows found on the boardwalks of the English seashore.

The exhibition also explores the colorful and eccentric history of the sideshow and the circus by presenting the research done by the show’s designers and fabricators. 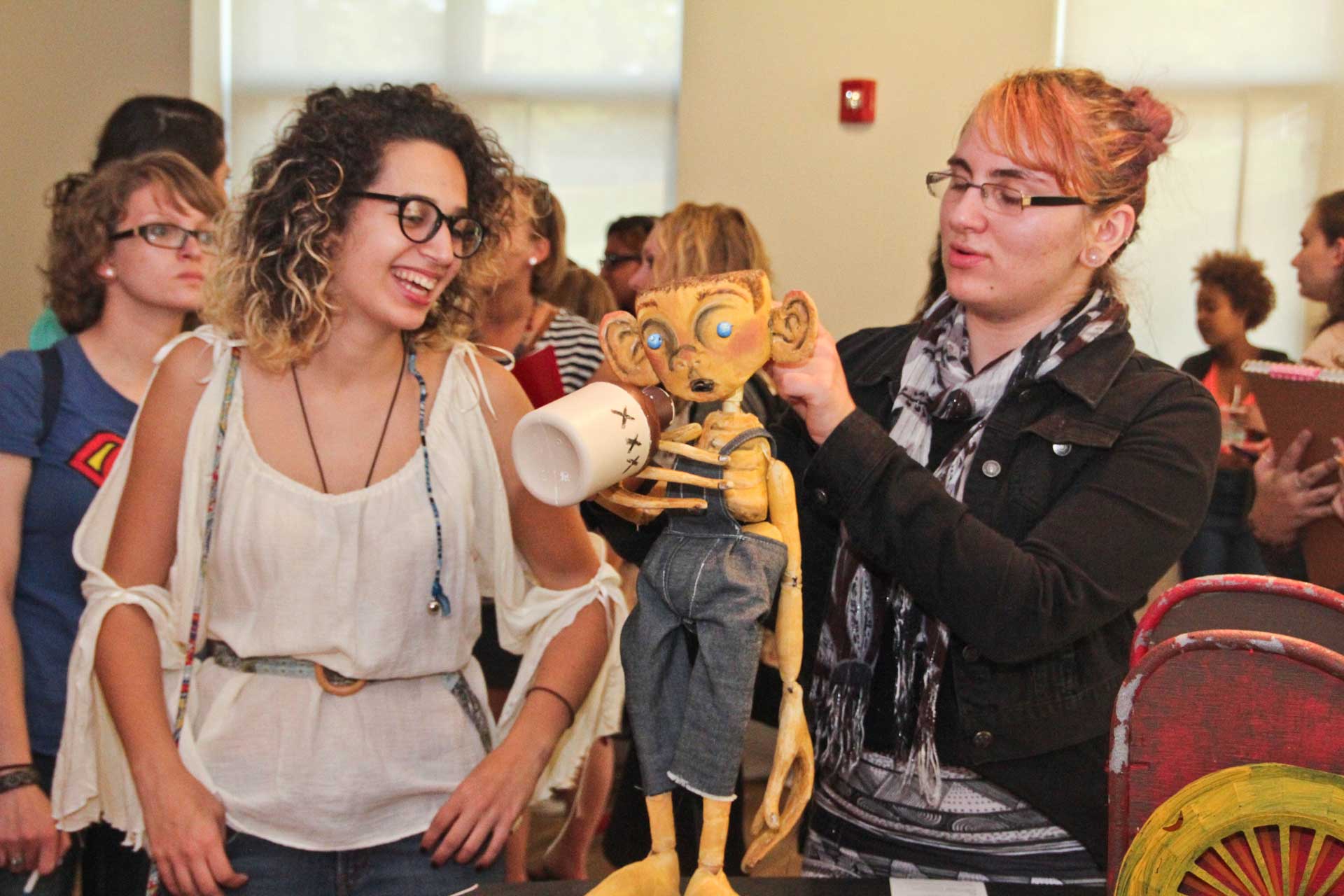 Attendees of the opening reception interacting with Isaac the Instrument of Intrique, photo: Kara Wright.

Additionally, the exhibition includes set pieces, props, music, and design sketches from the production, as well as a new video that documents a segment of the original performance. The video was simultaneously filmed from in front and behind the performers, giving viewers unique access to the choreography of the puppeteers. There is also an interactive puppet that visitors are invited to perform. 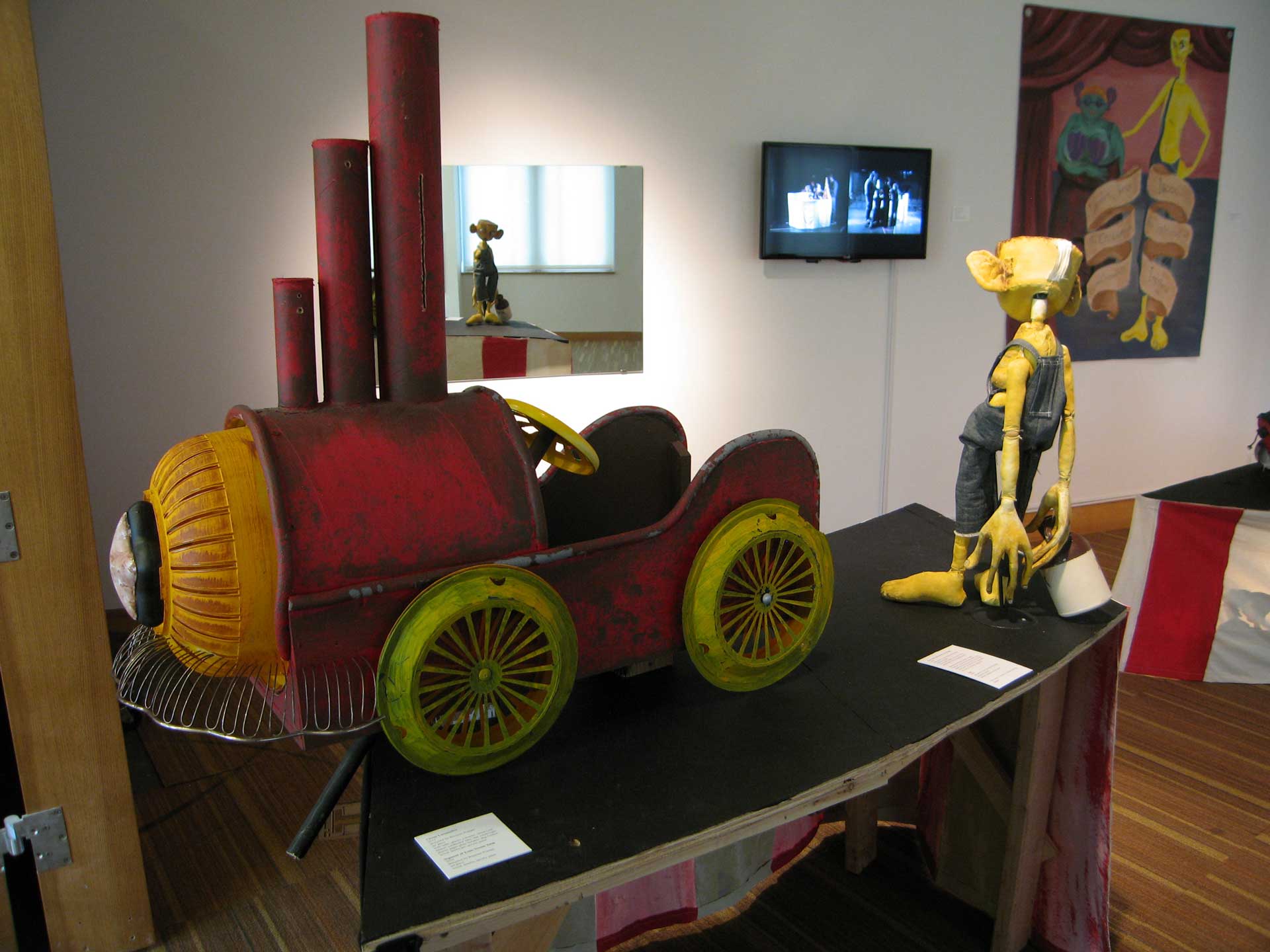 The exhibition was co-curated by Matthew Borgen (ARC Exhibition Program Coordinator), and Alisa Sickora Kleckner. A public reception will be held for the exhibition on Wednesday October 2, 2013 from 4:30 – 6:00PM. More events involving this exhibition to follow.

The realization of this exhibition was made possible by a donation to the Gateway Society by Theresa and John Rollins.

Opening Reception
October 2, 2013
To celebrate the opening of “Alive!” a reception will be held at 4:30 PM in the Commons Art Gallery with light refreshment provided. The event is free and open to the public. 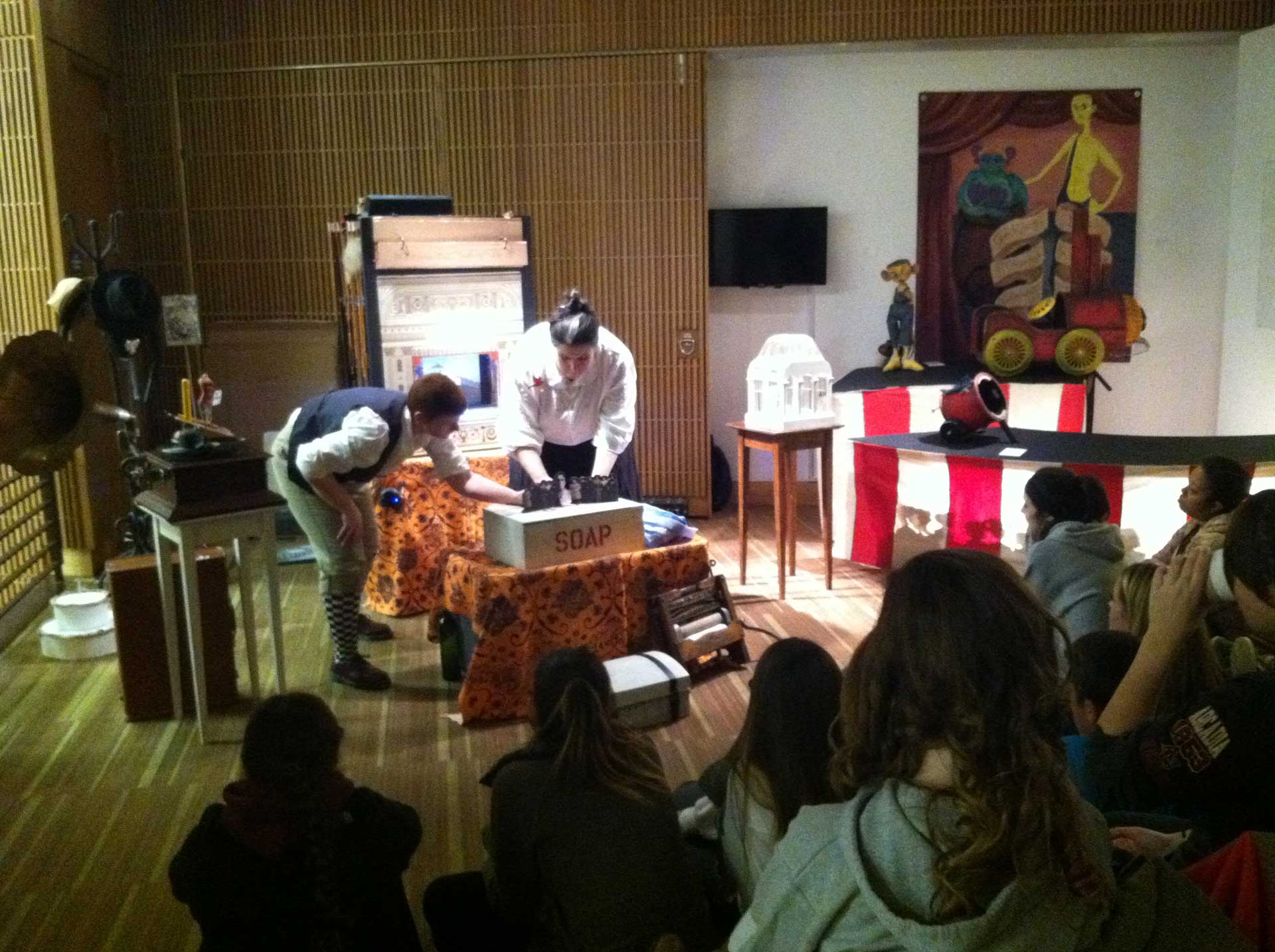 Performance
Emma’s Parlor
November 4, 2013
In conjunction with the exhibition, The Arcadia University Art Research Collaboration (ARC) Exhibitions Program is pleased to present a performance of Emma’s Parlor in the University Commons Art Gallery. Performed by Martina Plag director of Studium Praxis, a puppetry atelier located in Philadelphia, and Lorna Howley, this toy theater performance is adapted from Howard Zinn’s play about the life and times of Emma Goldman.
The performance utilizes objects typically found in late 19th and early 20th century American parlors to depict the life of the famed factory worker, anarchist, activist and lecturer. The performance will begin at 7:00PM with a short Q and A afterwards. Light refreshments will be provided.