Arcadia University’s ARC Exhibition Program is pleased to present the work of Jennifer Titone ’11 in its fourth annual “Alumni Spotlight Exhibition”. On view in the University Commons Great Room Lobby through Dec. 20, the show features recent works by the alumna, currently based in Fort Collins, Colorado.

The six large-scale oil paintings that comprise the exhibition are a sample of Titone’s ongoing exploration of her sensitivity to pattern, particularly those found in fabrics to which she was exposed on a daily basis as a child raised by parents immersed in the industrial textile manufacturing industry. 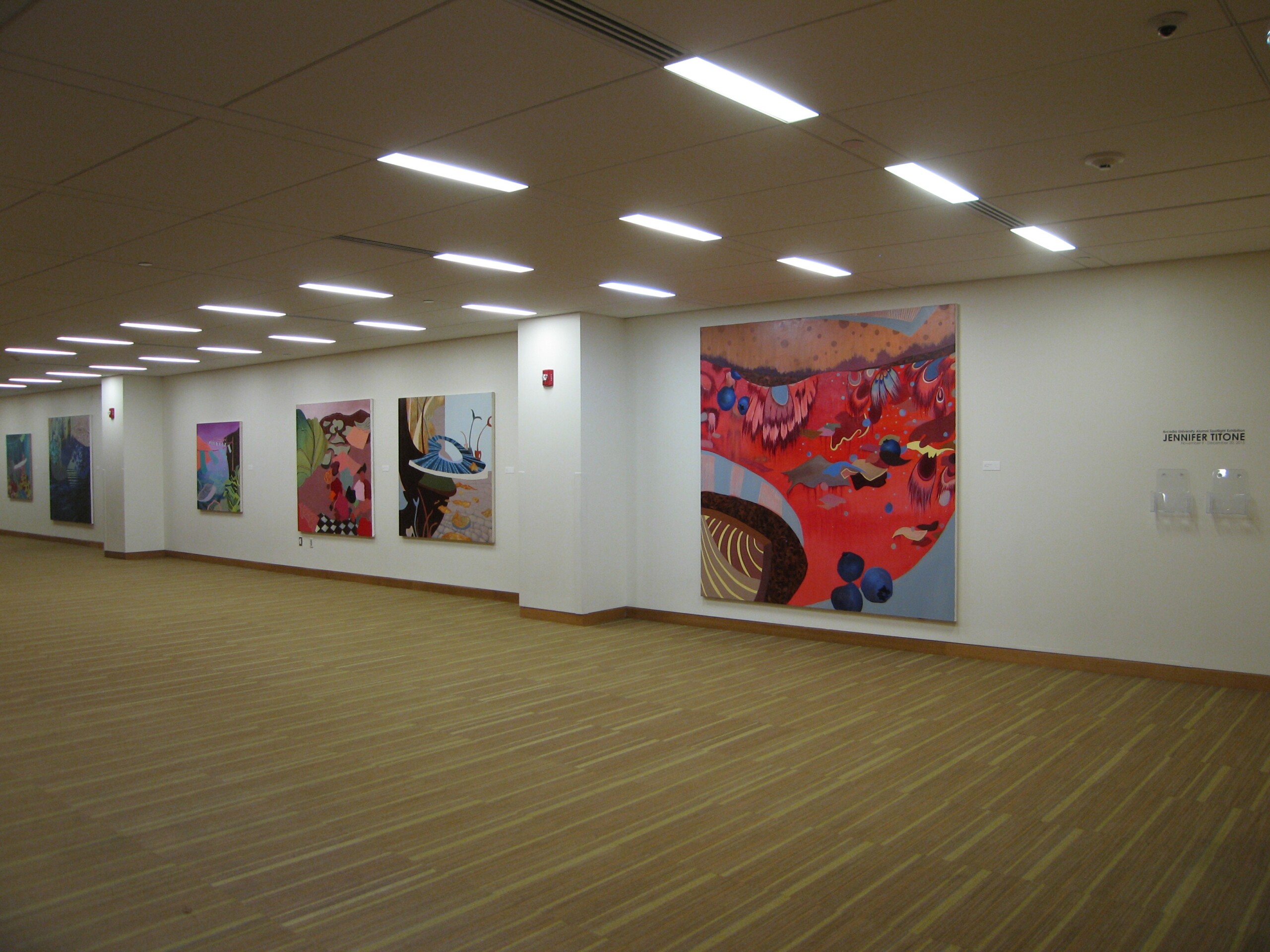 The imagery contained in these works consists of rendered fabric patterns that Titone encounters in her day to day experience. They normally take the shape of swatches or scraps, which creates an overall visual effect similar to collage, though at a grand scale. These elements are combined with other abstract planar forms depicted in an intense, otherworldly palette, as well as occasional depictions of recognizable objects, such as fruit, flowers, and vegetation. Together, these individual elements are intended to create a deliberate ambiguity within the compositions that shift in their reading between abstraction that readily acknowledges the painting’s surface, to areas of fantastical landscape with atmospheric depth. Through this ambiguity, Titone seeks a balance within which the paintings can represent the shifting and evolving nature of her own memories but also allow the viewer, as she says, “to create their own narratives of place and time.”

About Jennnifer Titone
A native of New Jersey, Titone earned a Master of Fine Arts from Colorado State University in 2014 following her Bachelor of Fine Arts from Arcadia. Aside from being an artist and bookseller, she also spends her summers working for a whitewater rafting company on the Cache La Poudre River.

The exhibition is curated by Matthew Borgen and was made possible by a donation to the Gateway Society by Dr. Theresa Rollins, a former trustee, and her husband, John Rollins. For more information about the exhibit, contact the ARC Exhibition Program (215-517-2629).

Alumni Lecture
“Chaos in Patterns:
One Artist in a Series of Many”
November 12, 2015
Titone will have a discussion about her work moderated by Exhibitions Coordinator, Matthew Borgen at 4:30 PM in the University Commons Great Room. A reception will immediately follow in the gallery, where the audience will be able to examine Titone’s work in person. Both events are free and open to the public. The lecture is co-sponsored by the Department of Art and Design and the Arcadia University Alumni Association.