The Harrison Gallery (formerly the Commons Art Gallery) will introduce a new series of works which depict Profitt’s darkly satirical exploration of issues related to institutional authority, social standards of beauty, and gender inequality. The Rosedale Gallery (formerly the Great Room Lobby Gallery) will present a selection of paintings spanning her artistic evolution between 2011 and 2015. 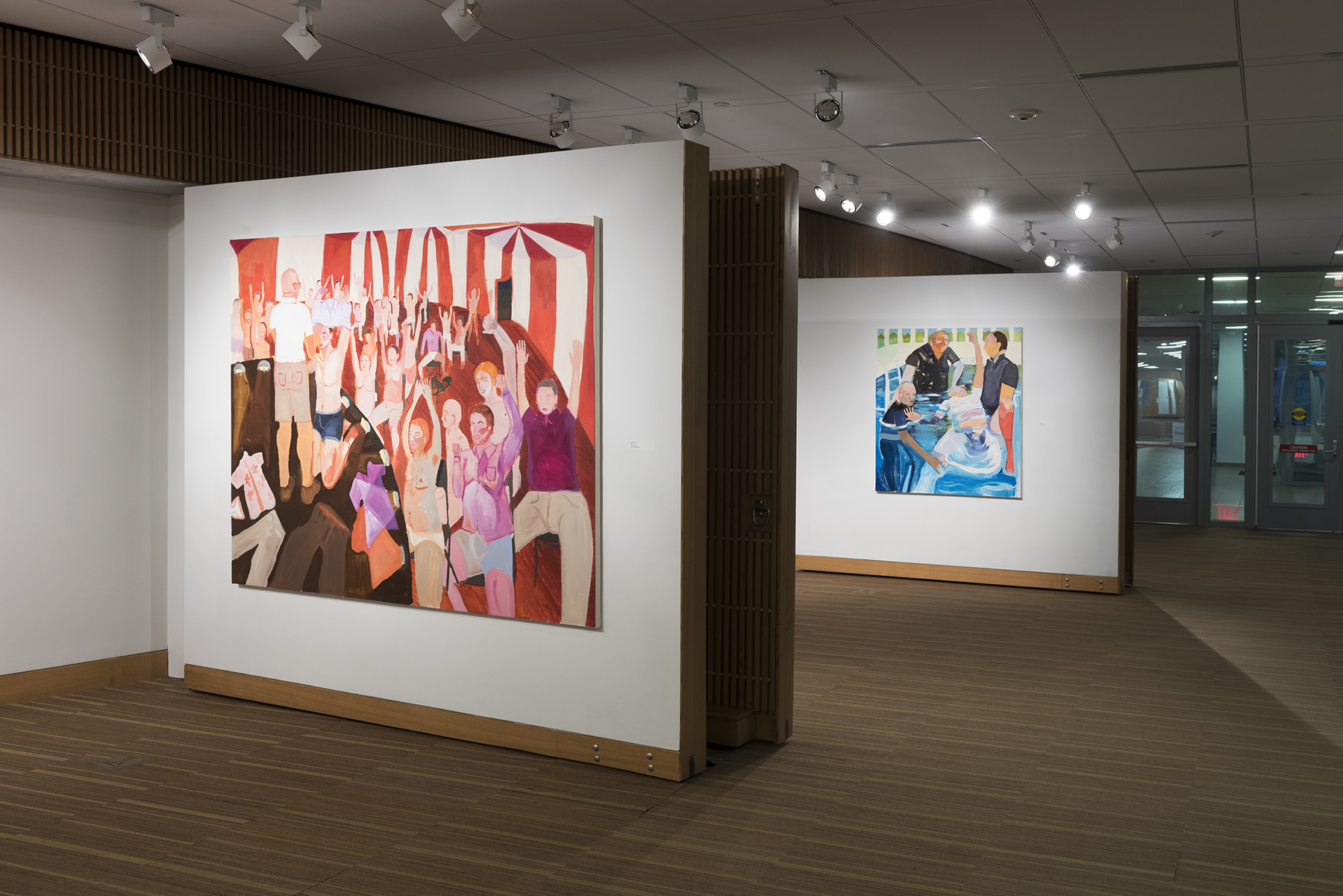 In her most recent series of 12 oil paintings, Profitt depicts a dystopian reality which she describes as, “a world dominated by a powerful hierarchy. Males ascend to adulthood via a rite of passage in which they shave together, they meet together, determine standards of beauty, and perform rituals. Conversely, women are baptised, bathed, and prepared according to a prescribed set of rules established by the men.” The images in this series depict these various grooming rituals in action. Through choices of scale and composition, Profitt positions the viewer in the center of these activities, to stand as either witness or participant.

Her painterly approach, which, for the most part, forgoes heavily rendered detail or realistic sense of depth, harkens back to the experiments in figuration undertaken by painters such as Philip Guston (1913-1980) and David Park (1911-1960) at the height of abstract expressionism. Similar to the works of New York-based artist Nicole Eisenman, Profitt’s expressionistic treatment creates a psychological distance between the viewer and her constructed reality. The resulting abstraction and flattening provides a measure of time in which to acclimate to the imagery and allows for the possibility of recognizing  just how chillingly similar Profitt’s constructed reality may be to our own.

The works created between 2011 and 2015 presented in the Rosedale Gallery reveal the development of Profitt’s stark, narrative approach to image making, characterized by a seamless combination of brutal self analysis and disarming charm. Paintings such as Allentown Rest Stop: Roy Roger’s Before it Closed (2011) and The Togetherness (2012) seem to represent memories of relatively mundane moments from Profitt’s own life – a meal with relatives, or sitting in the backseat during a family road trip. However, instead of returning to these memories with a sense of nostalgia or longing, she transforms herself and – presumably her family –  into faceless, vibrating blurs forced awkwardly together into compositions that seem barely capable of holding them. 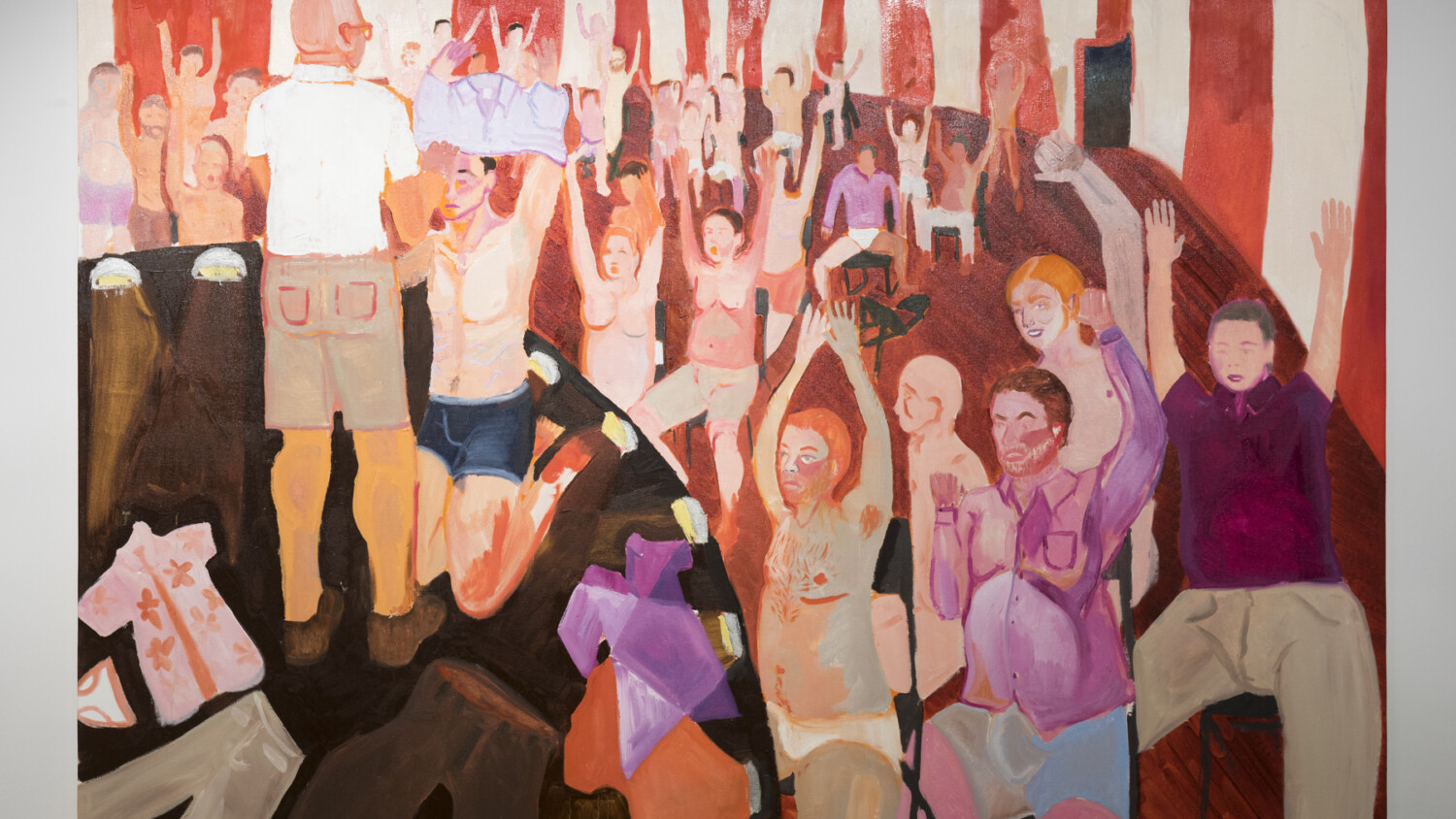 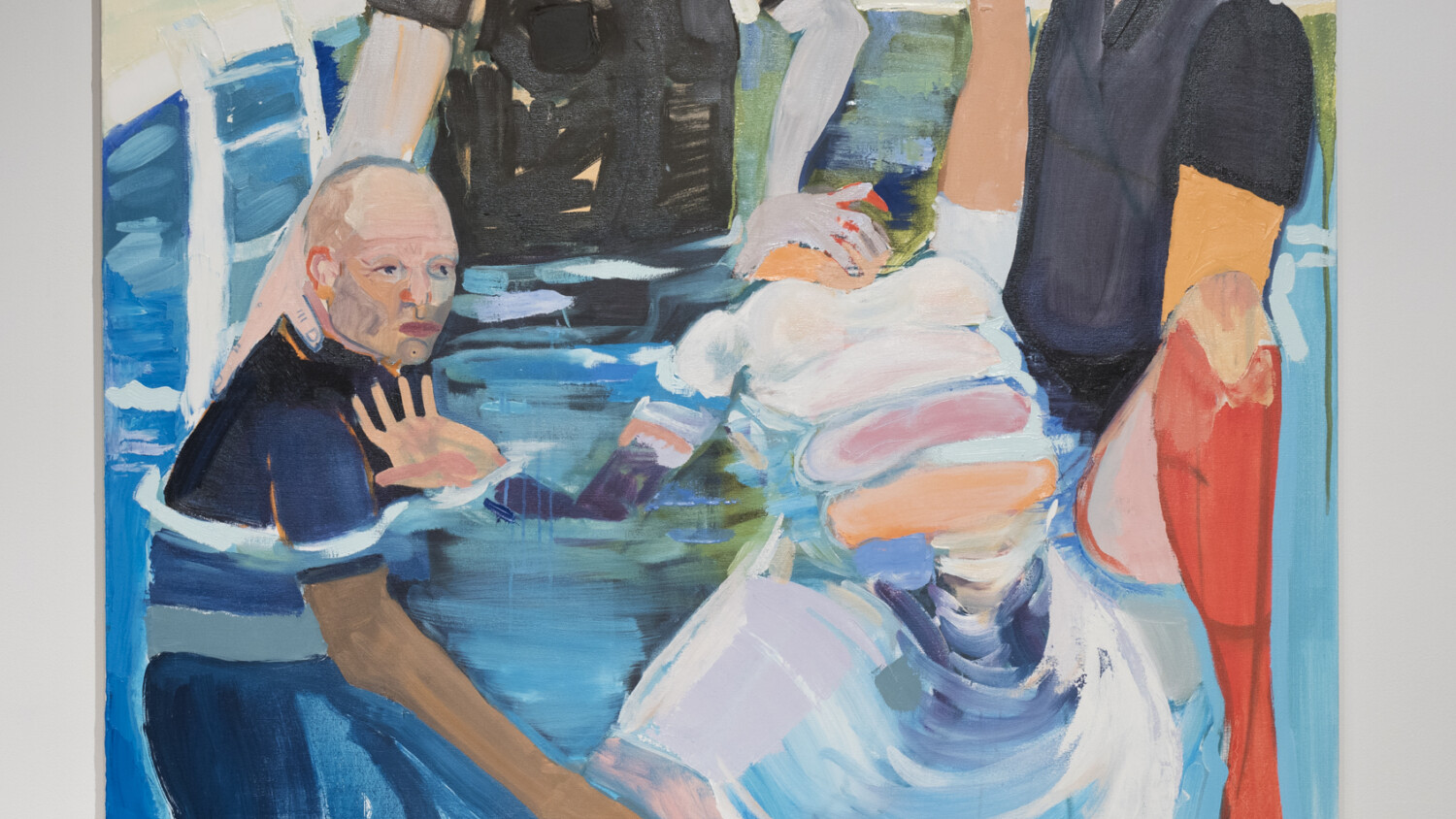 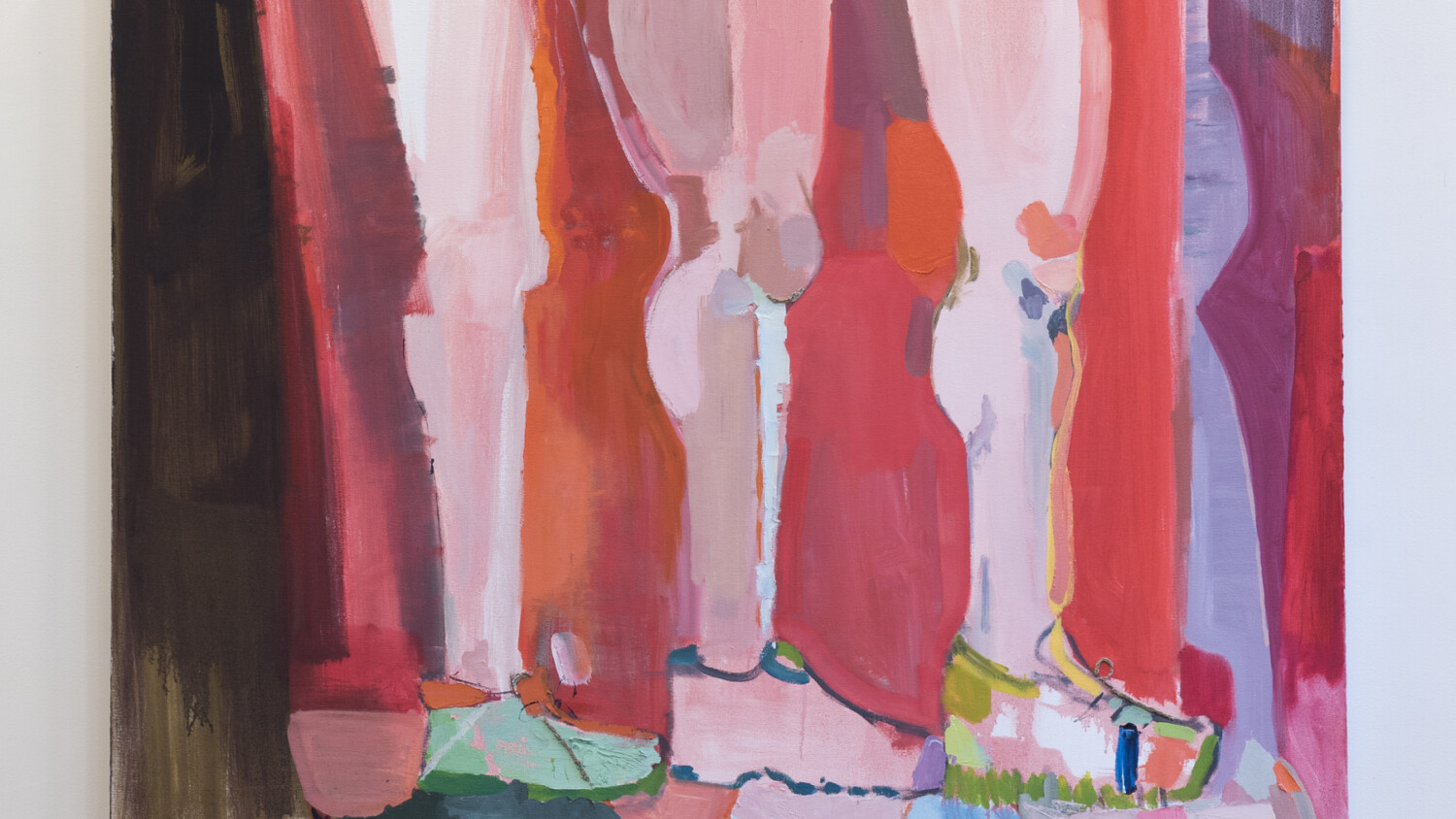 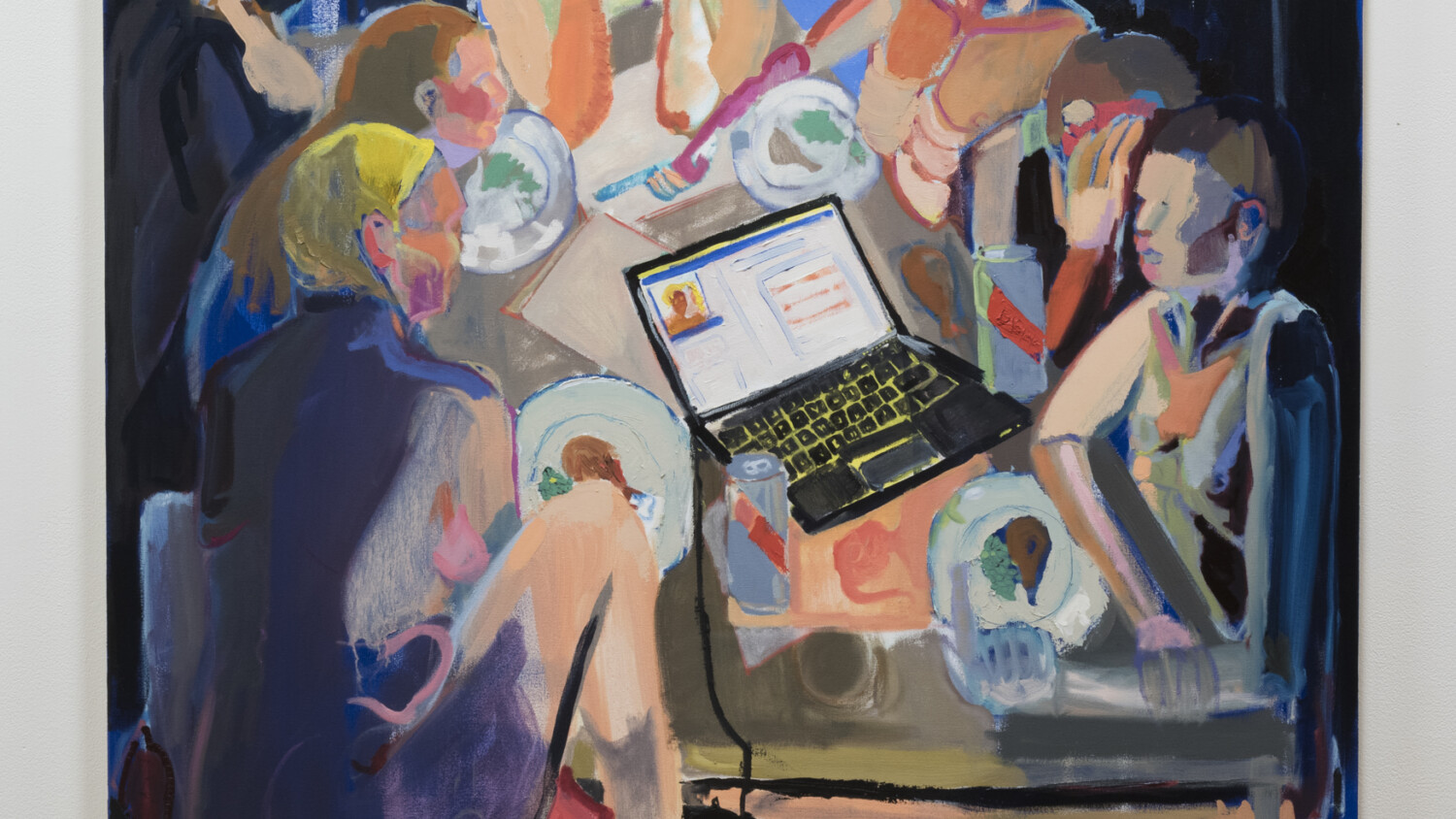 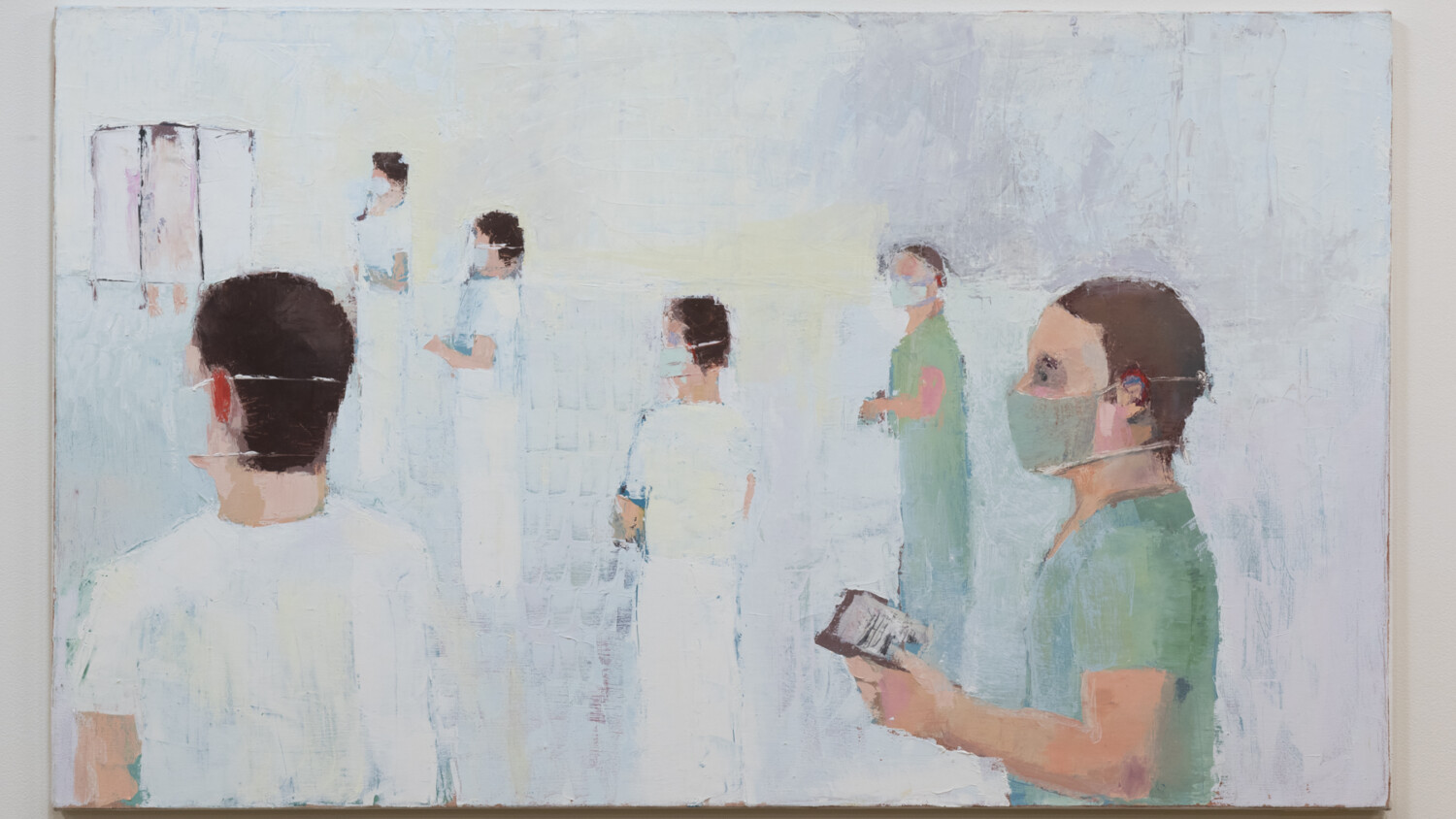 Your Meeting, 2014, oil on canvas, courtesy of the artist

Checking You Out, 2015, oil, acrylic on canvas, Courtesy of the artist.

The Doctors, 2012, oil on canvas, Courtesy of the artist.

Your Meeting, 2014, oil on canvas, courtesy of the artist

Checking You Out, 2015, oil, acrylic on canvas, Courtesy of the artist.

The Doctors, 2012, oil on canvas, Courtesy of the artist.

In her newly completed canvases, being presented to the public in this exhibition for the first time, Profitt has shifted her ruthless internal gaze outward and onto issues in the broader cultural discourse related to the injustices women experience in a male-dominated society. The rawness with which Profitt continues to render her new characters maintains the sense that the emotional stakes involved in these works are still very personal, but have been tempered with a sense of the allegorical and an address to the history of her medium.

The exhibition is curated by Matthew Borgen, and was made possible by a donation from Theresa and John Rollins. For more information about the exhibition, please contact the ARC Exhibition Program at (215) ­517-­2629 or borgenm@anthony_schiavone

Based in Horsham, Pennsylvania, Profitt earned her M.F.A. in painting from Illinois State University in 2015. Since then she has served as both a professor in the foundations curriculum and as the shop technician for Arcadia’s Department of Art and Design. In 2017 she co-founded Spillway Collective, an artist-run space based in the Crane Arts Center in Philadelphia. Her work has been included in exhibitions at University of the Arts, Philadelphia; Front Room Gallery, New York; and the former Ebersmoore Gallery, Chicago.

Alumni Lecture
“Watching You, Judging You”
November 30, 2017
Profitt’s lecture will survey her career as an artist since receiving her BFA from Arcadia in 2011. The event will take place on November 30, from 5:30 to 6:30 PM in the University Commons Great Room. A reception will follow immediately afterwards in the Harrison Gallery. The exhibition and the lecture are free and open to the public. The lecture is co–­sponsored by the Arcadia Exhibitions Program and the Department of Art and Design.