Listen to the Artblog Review

Arcadia University Art Gallery is pleased to present “Anonymous Shiva Linga Paintings,” a selection of Tantric images made by anonymous painters from Rajasthan, India on view through December 22, 2013. 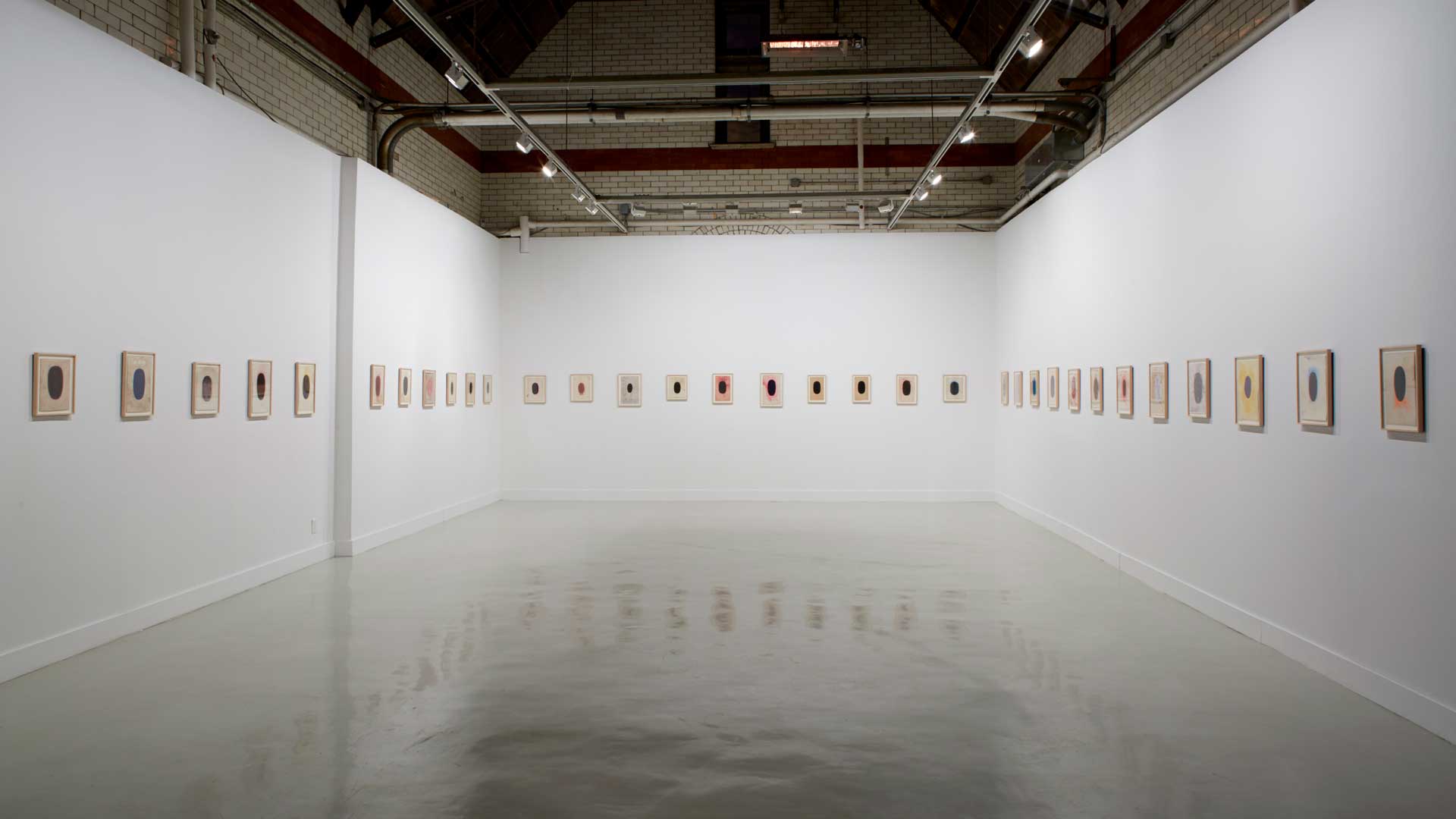 Each of the 35 works in the exhibition depicts the “Shiva linga” on a page-size sheet of salvaged paper. The Sanskrit word “lingam,” originally meaning “mark” or “sign,” often refers to the phallus or symbol of male creative energy that is complementary to the “yoni,” which means both “source” and “female”. The term ‘Shiva lingam’, however, describes one of the forms of Shiva, the Hindu god of destruction and transformation and one of the trinity of deities that also includes Brahma and Vishnu. It shows him in his unborn and invisible state.

Unlike sculptural “Shiva linga,” which are commonly phallic in shape, the linga in these paintings are ovoid and accrue some of the symbolic associations of the “egg-shaped cosmos,” a concept that can be traced back to ancient Sanskrit scriptures such as the Brahmanda Purana. (The idea of the “hiranyagarbha,” the “golden womb” or “golden egg” that represents the birth of the cosmos and the source of all energy, is another point of comparison).

Made to awaken heightened consciousness, the images are intended to cancel distraction and be readily remembered. According to French poet Frank André Jamme, who has played an instrumental role in introducing these paintings to western audiences, the tantrikas who create them work in a focused state of mental rapture.  Jamme likens their activity to that of musicians performing the ragas of classical Indian music, repeating and subtly reinterpreting melodic structures. When complete, the paintings are pinned to the wall to foster private meditation. As Jamme writes in Shiva Linga, published in 2007 by Feature Inc.:

They are used for visualization. For example, you get up in the morning. Then, almost immediately: face-to-face with the thing, for several minutes. Until it has filled your mind, right to the top, until it has slowly eliminated everything else. Then you come back to the world, attend to your daily affairs. With the difference that, when you want to, you can instantly recall the image in your mind, and what’s more, you can recreate the entire world of this image, namely the image itself enriched by its constellation, in short all that is first precisely signified augmented by what it has produced, given rise to, released in us, as crystalline and operative as in the morning.

The “Shiva linga” is only one of many designs within the vocabulary of Tantra, an esoteric and complex branch of Hinduism. When the works are seen in succession, the repetition of the lozenge-shape form, centered on diversely stained and tinted supports, elicit an acute form of attention that renders nuanced distinctions between each example significant. Despite their expression of an unbroken, centuries-old tradition, the works that comprise this exhibition (made between 1970 and 2000), convey a surprising freshness and immediacy. Possessing an uncanny affinity with examples of 20th-century abstract art, they are coveted both in India and in the West. Feature Inc. began exhibiting these paintings in 1998 and has continued to support their presentation internationally, most recently at the current Venice Biennale.

Jamme’s investigation of the paintings began with a trip he made to India in 1985 when he first searched in vain for the source of the works. On the road to Jaipur, he survived a deadly bus accident, returning to Paris with wounds that took two years to heal. When he returned to India a few years later, he met a soothsayer who proclaimed that Jamme, in his suffering, had paid sufficient tribute to the goddess Shakti and—so long as he vowed to visit the tantrikas alone or with someone he truly loved—he could enter the private communities of adepts who make and use these paintings for their spiritual practice. Returning to France from India with a selection of examples and a better understanding of their use and meaning, Jamme exhibited the paintings as part of “Magiciens de la Terre (Magicians of the Earth)” exhibition held at the Pompidou Centre in 1989.

While they invoke the highly symbolic cosmology of Hindu Tantra, these contemporary, anonymous works from Rajasthan are unlike the more familiar strands of Tantric art. The progeny of hand-written, illustrated religious treatises from the 17th century, copied across many generations, these paintings are part of a distinct visual lexicon that confound assumed differences between East and West, the spiritual and the aesthetic, the ancient and the modern.

Lecture
The Form of No Forms: Placing Shiva Paintings in Context
December 3, 2013

Scholar and author Frederick Smith will give a lecture at 6:30 PM in the Little Theatre, Benton Spruance Art Center, as part of the Gallery’s efforts to place these paintings in cultural and religious context,

Smith is currently the Stewart Fellow in the Princeton Humanities Center, Visiting Professor in South Asian Studies, Princeton University, and Professor of Sanskrit and Classical Indian Religions, Department of Religious Studies, Department of Asian & Slavic Languages & Literature, University of Iowa. He completed his Ph.D. at the University of Pennsylvania in 1984 and has published extensively on a range of topics, including the modern performance of Vedic sacrificial rituals and translations of the early 16th-century devotional poet and philosopher Vallabhacharya. His last major volume was The Self Possessed: Deity and Spirit Possession in South Asian Literature and Civilization (Columbia University Press, 2006). Smith is currently completing a translation from Sanskrit of the final books of the Indian national epic, the Mahabharata, for publication by the University of Chicago Press, after which he will commence a history of Vedas for Cambridge University Press.

A reception will be held immediately aftward in the Gallery. Both events are free and open to the public.