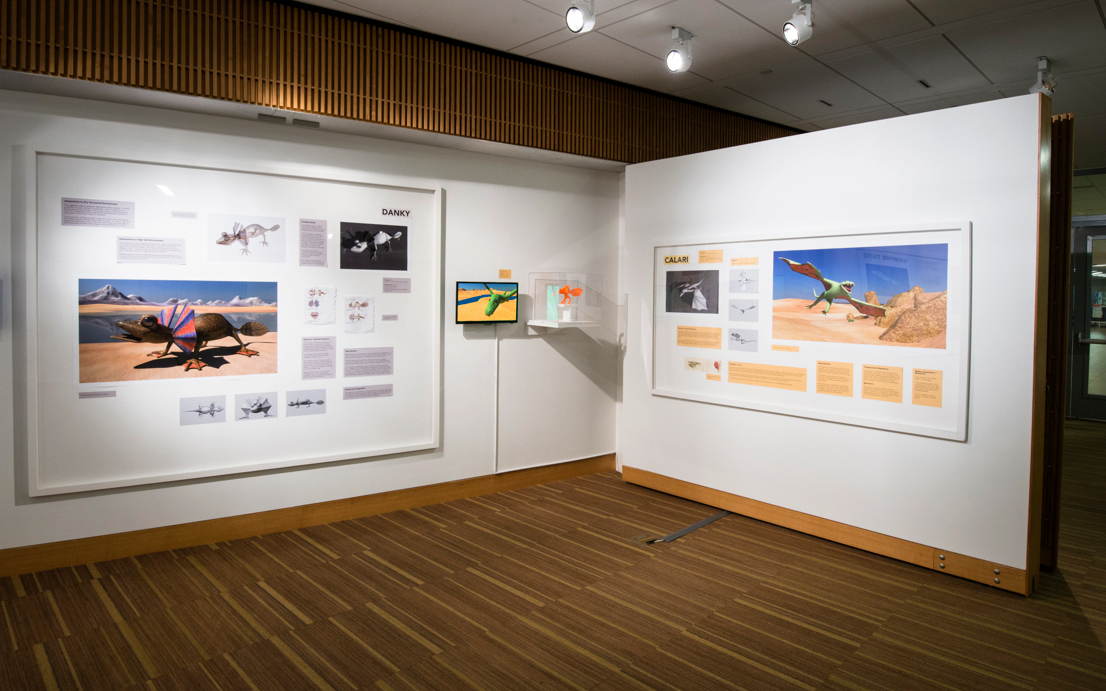 The ARC Exhibition program is pleased to present “Biodesign Atacama: Imagining New Life Forms in the Northern Chilean Desert” in the Commons Art Gallery from August 11 through November 29, 2015. The digital images, printed 3D models, video animations, and other materials that comprise this exhibition depict invented life forms that could have evolved in the Atacama Desert region of northern Chile’s high Andean plateau, the driest nonpolar environment in the world.

This ongoing collaborative project, directed by artist/animator Gerald Habarth (West Virginia University) and biologist/researcher Sheryl Smith, breaks down the perceived separations between scientific and artistic approaches and merges those modes of observation and thinking into a hybrid model of research, in this case trained on generating a heightened understanding of this arid, beautiful region.

In the exhibition, visual depictions of alien protozoa, a desert hawk, a flying lizard, and an array of insects shown at a monstrous scale are paired with wall text providing imagined scientific information regarding their predatory patterns, reproductive rituals, and adapted traits. This combination transforms the gallery into a space that feels indebted in equal parts to a natural history museum and a mad scientist’s menagerie.

“The works being presented disrupt the traditional relations between the fields of science and art,” said Habarth. “For example, the images and animations in this show are not concerned solely with illustrating scientifically driven ideas. They are imaginatively derived creations in their own right, albeit informed by science, and a knowledge of the real world derived through direct engagement with the environment. Likewise, the scientific issues dealt with in this project do not merely provide a platform for advancing a purely artistic agenda. Instead, they are essential components of the final expression.”

Though at first glance many of the creatures seem reminiscent of science fiction, Smith is quick to point out the misconception that speculation and imagination are alien to scientific research. 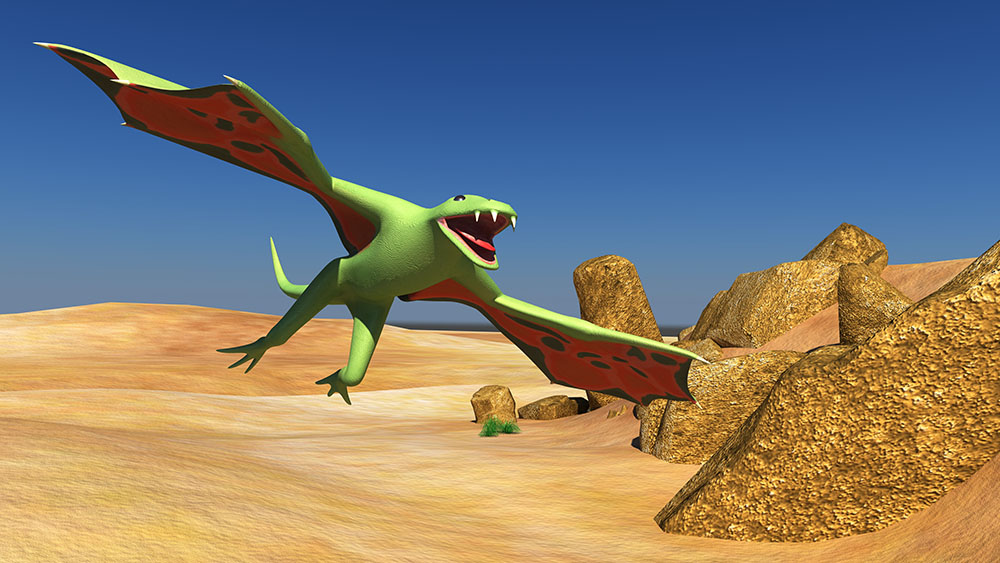 “Fictionalized extrapolation is not paradoxical to observational research, but is in fact an extension of it,” said Smith. “When viewing a subject, you are thinking about its anatomical features, its behavior, how it moves, how it feeds, comparing it to other creatures that might be familiar to you, categorizing it, etc. In fictionalized extrapolation, you are doing all of those same things, but instead of observing, you are using your prior knowledge to imagine.”

The creatures, with names such as “Vampire Tikito,” the “Danky,” and the “Needle Beetle,” were originally conceived by groups of Arcadia students who participated in a Global Field Study course that traveled to the Atacama Desert three times, beginning in 2012. There they applied their knowledge of the principles of evolution (descent with modification and natural selection) by observing, analyzing, and evaluating adaptations of the flora and fauna indigenous to the area. Extrapolating from this information, the students developed hypothetical organisms adapted to survive in this region, conceptualizing their physical traits, adaptive features, habitats, and behaviors, and visualizing these organisms through sketches. 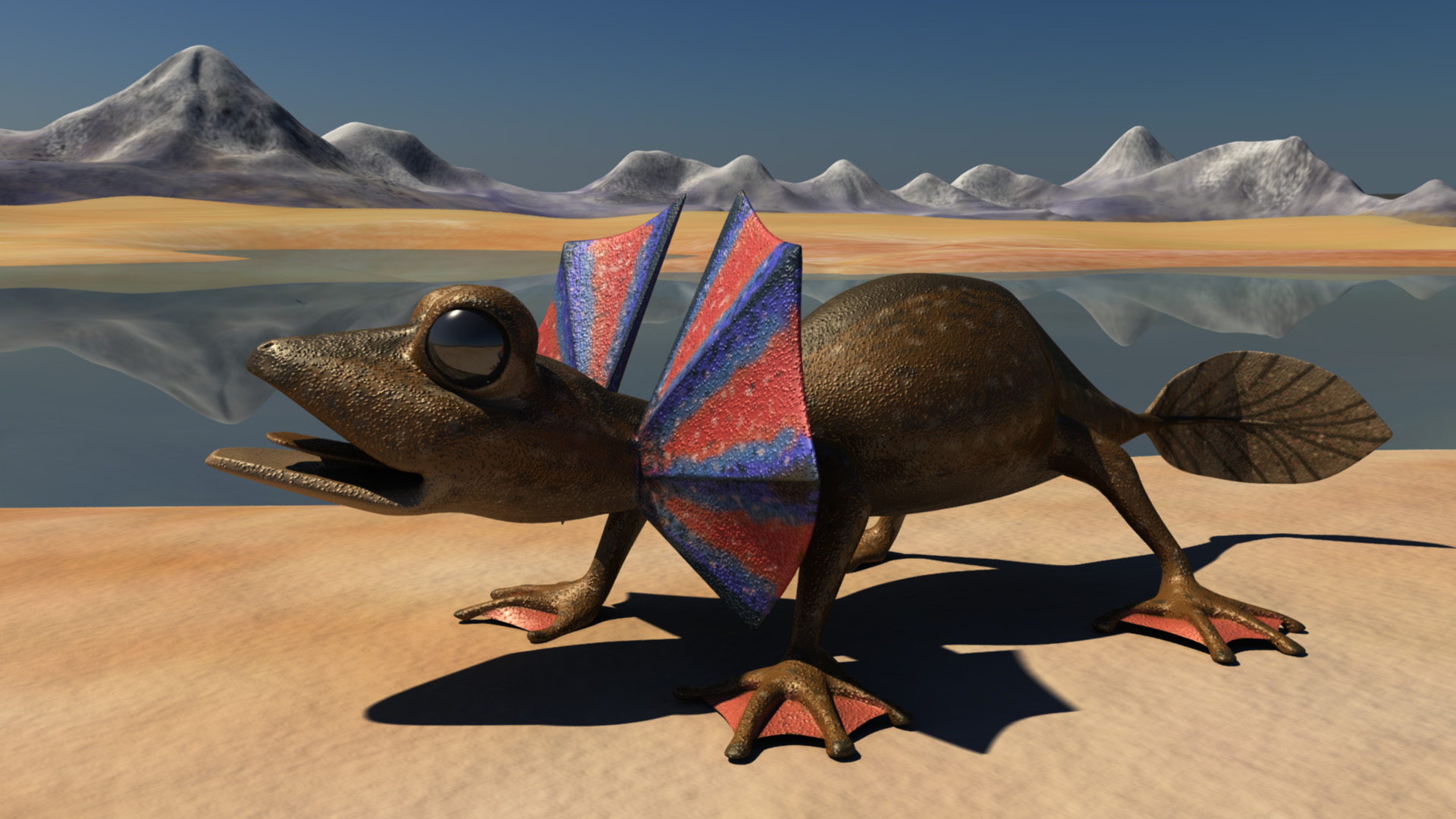 The exhibition highlights six organisms and traces their development from the initial stages of handwritten notes and rough sketches to their final realization in 3D animated form. Habarth and Smith selected these creatures from numerous proposals developed by some 50 students involved in the Global Field Study course.

For Habarth, the Biodesign project suggests a new mode of thinking where science and art cooperate without a sense of hierarchy.

“The current project has great potential to influence future research and teaching in both the arts and sciences through the application of its founding premise, which is that equal interactions between fields are able to produce both unique and potentially more useful information than they are capable of on their own,” he said.