The Arcadia University Exhibitions Program is pleased to present “David Guinn: Before the Wall – Mural Sketches and Designs” on view in the Great Room Lobby of the University Commons from October 10, 2016 to January 8, 2017. 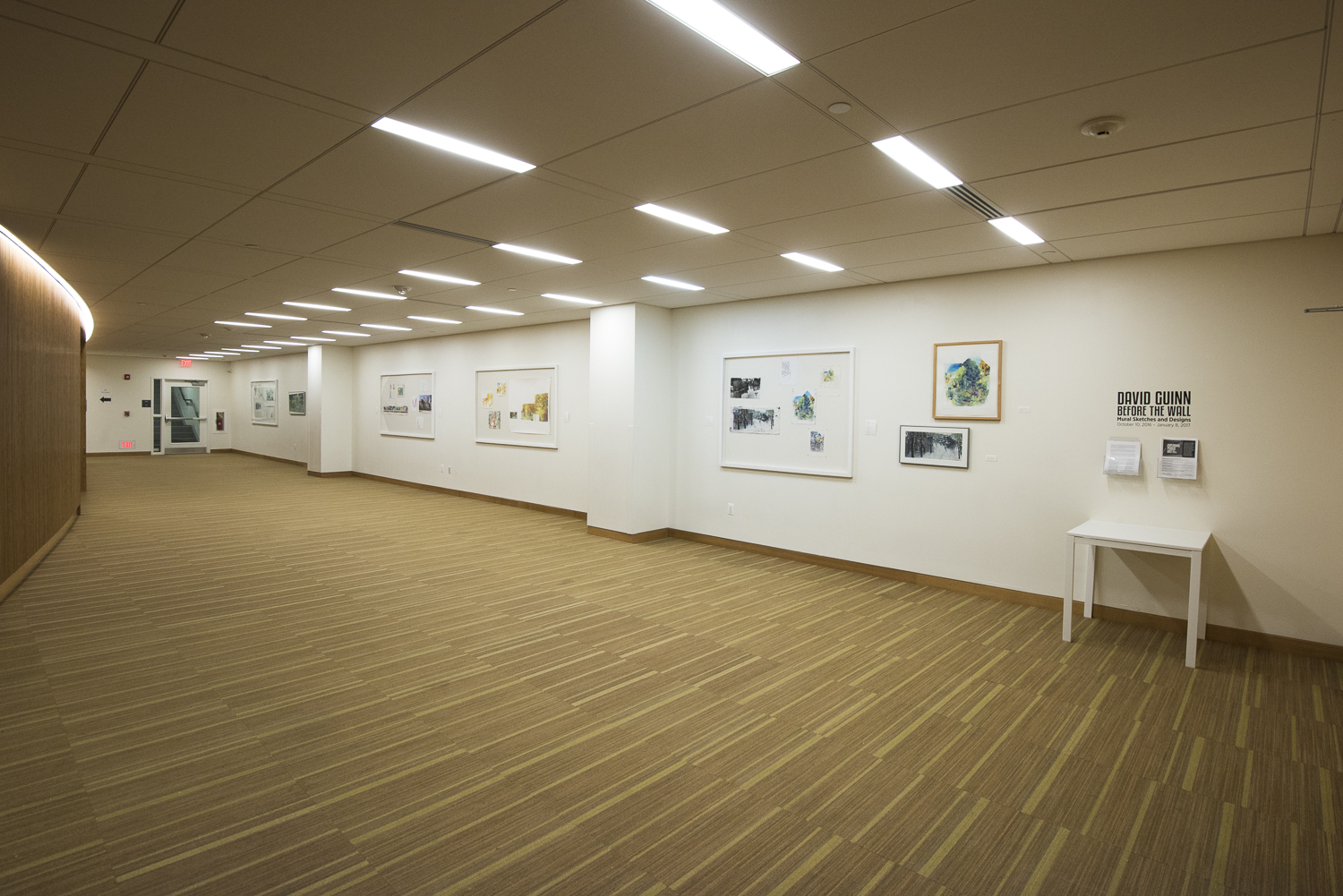 This exhibition focuses on paintings and drawings on paper created by Guinn in the preparatory stages of his mural production. A native of Philadelphia, Guinn has painted 40 murals in cities worldwide, including Amman, Jordan; Montréal, Québec; New York; Washington, D.C.; and Chicago. Guinn is represented by projects in almost every neighborhood in Philadelphia, including his most recent, Electric Street (2016), a mural incorporating programmable lighting at 9th and Wharton Streets. 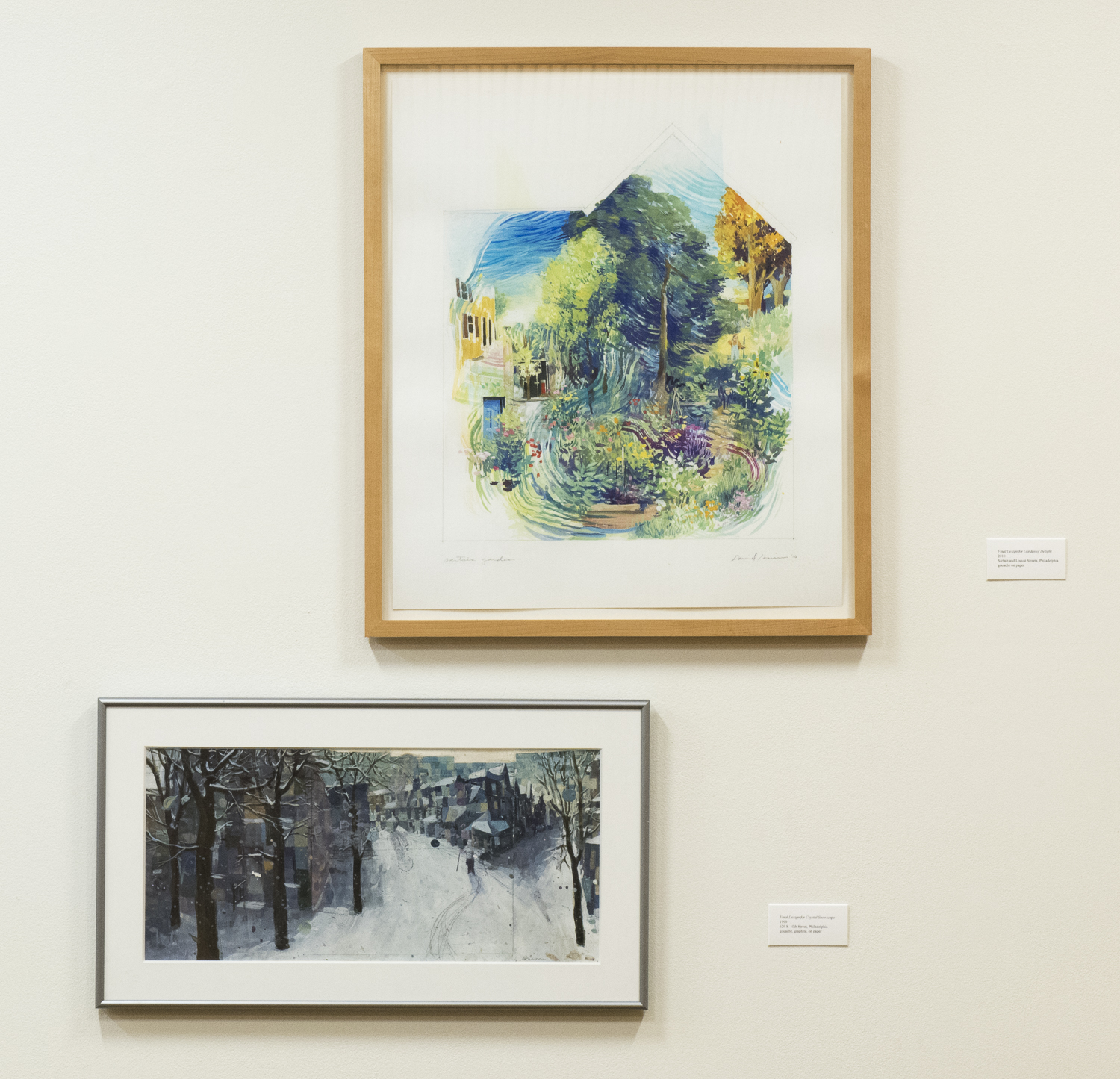 Drawn from eight murals undertaken by Guinn in Philadelphia between 1999 and 2016, these sketches and designs are presented together in this exhibition for the first time as a means of examining the process the artist undertakes in developing these distinctive public works. The projects represented in the show include: Crystal Snowscape (1999), at 629 S. 10th Street; Gimme Shelter (2004), at the Morris Animal Refuge, 1242 Lombard Street; Fairmount (2010), on the exterior of The Bishop’s Collar, 2349 Fairmount Avenue (in collaboration with Phillip Adams); Garden of Delight (2010), behind a community garden at Sartain and Locust streets; Be Kind to Animals (2012), at 22nd and Dauphin streets; Autumn Revisited (2012), on the exterior of the Fleisher Art Memorial, at 719 Catharine Street; Growth and Change (2014), 4th and Manton Streets; and Wissahickon Station (2016), 5100 Rochelle Avenue.

Gimme Shelter (2004) in particular, is indicative of the charm and subtle humor that permeates Guinn’s overall approach to designing murals that reflect the character of the neighborhoods in which they are executed. In this instance the community surrounding the Morris Animal Refuge in South Philadelphia was represented, not by its human residents, but by the pets they had rescued from the shelter. Specifically, Guinn created individual portraits of adopted animals selected through a raffle, the proceeds of which helped to fund the mural. 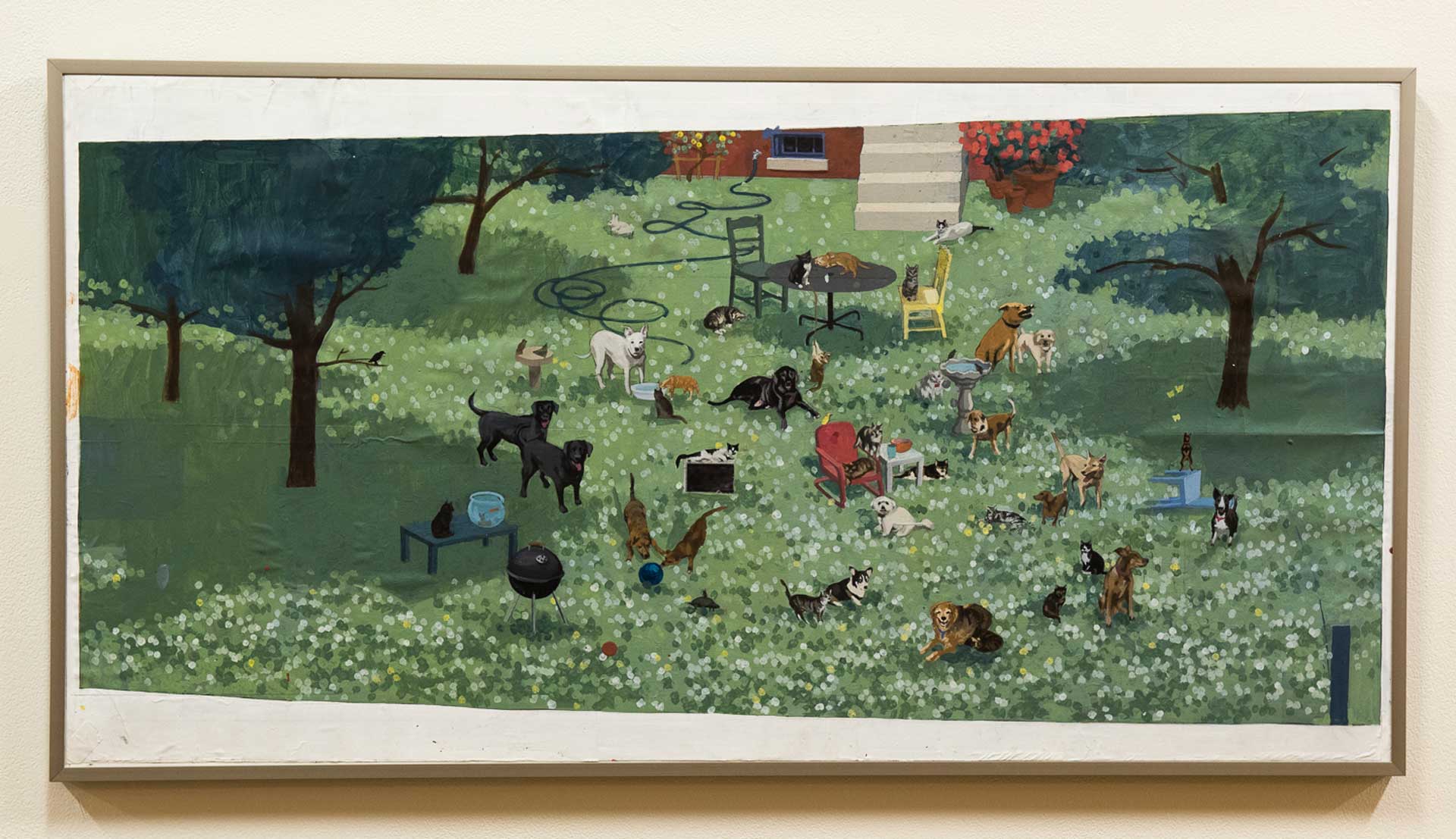 The impression that Guinn achieves in these murals of his brush strokes and gestures being very much present in the work stems in a large part from the continuous activity of painting that he maintains throughout every step in his preliminary design scheme. In an interview with Carly Rapaport-Stein for the Philadelphia Mural Arts website, (https://www.muralarts.org), Guinn stated, in regard to his process , “I approach my work as a painter would a canvas. . . I do a lot of research on the site and on the neighborhood so that what I propose resonates with the people who will live with the mural.” The paintings presented in this exhibition were either executed by Guinn at the proposed mural location or are derived directly from this initial on-site research.

The preparatory works for Garden of Delight (2010), for example, provide an overall view of Guinn’s routine, from his first explorations of the site to his finished design used to produce the final mural. These include a graphite sketch of the proposed site into which Guinn has executed an early version of the mural in gouache in order to work out color and compositional issues while present in the environment in which the mural will reside. In addition, there are several studies employing black gouache depicting doorways, alleys, and community members working in the garden, some of which were incorporated into the finished mural.

At times Guinn will combine imagery produced on-site with outside source material, as in the case of Crystal Snowscape (1999). The finished composition of this project is a hybrid of  Breughel’s Hunters in the Snow (1565), from which the trees in the mural are appropriated, and a found photograph documenting a flooded street in Philadelphia. The remainder of the mural consists predominantly of blocks of row homes drawn by Guinn in the neighborhood itself.

The finished designs for projects such as Garden of Delight (2010), Autumn Revisited (2012), and Wissahickon Station (2016) are the final phase in Guinn’s process prior to realizing the mural, and are paintings themselves, even if executed on inkjet prints of previous iterations of the mural. These are inevitably derived to some degree from Guinn’s earliest painted sketches. They function as inspirational blueprints, helping to guide him and his assistants in the implementation of the finished works. (Viewers of the exhibition will notice on the aforementioned works the presence of stray marks of paint, weather damage, and other physical blemishes indicating their use on sight during the murals’ final execution.) 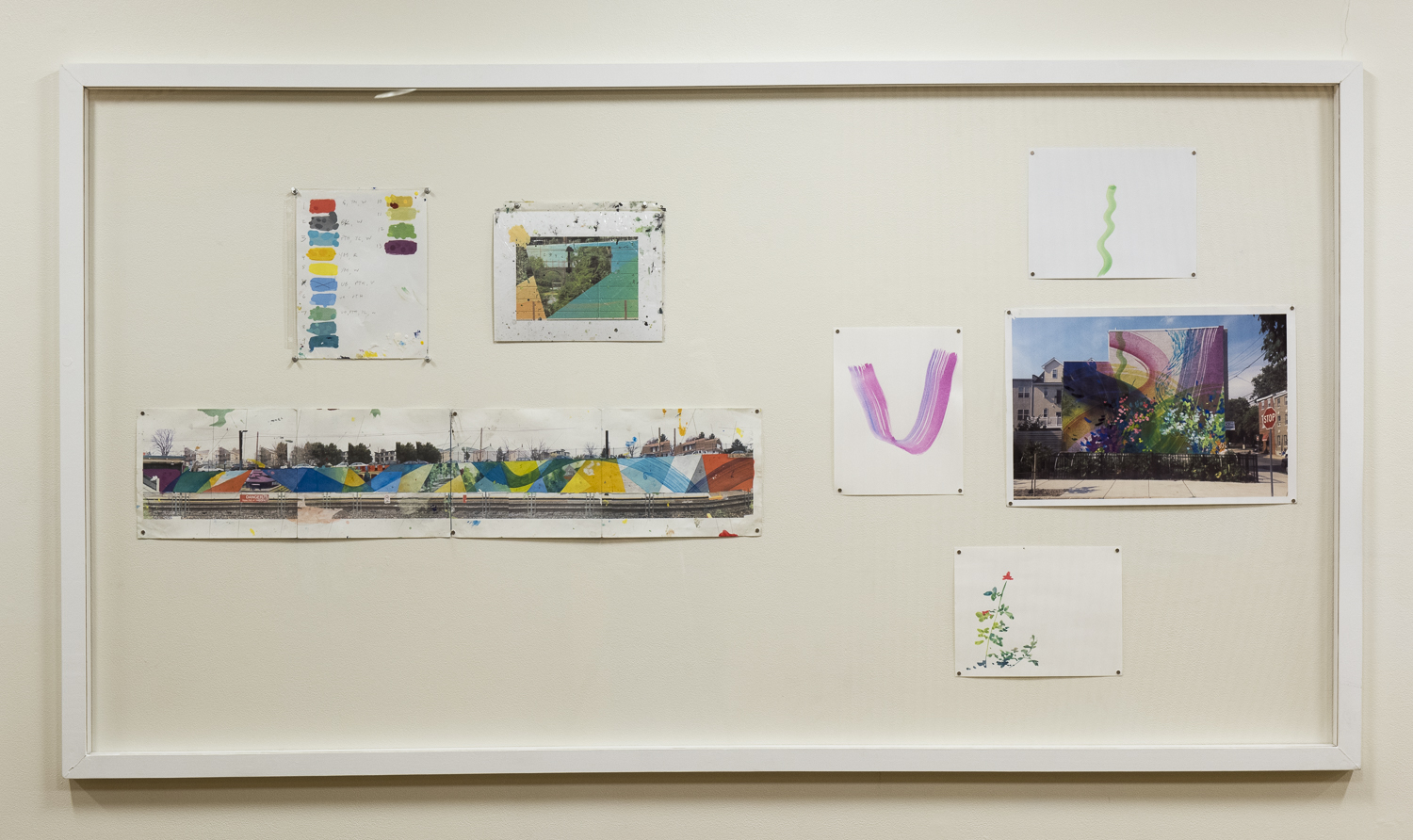 The key to Guinn’s ability to create the feeling of painterliness that distinguishes these works is that the hand-made marks generated at the finished design scale cannot be duplicated precisely when transferred to the wall. This allows him a flexibility and capacity for spontaneity in his application of the paint while on the scaffold, which results in an increased sense of energy in the work. Because it is all but impossible for Guinn to recreate the study, he has ensured that he cannot become enslaved by it. This sense of freedom provides him with a much more active engagement during the creation of his finished work, which he considers vital to the process.

Guinn has received fellowships from The Knight Foundation, the Independence Foundation and the Mid-Atlantic Arts Foundation and was a finalist for 2012 Pew Foundation Fellowship in the Arts. Guinn’s work has been noted in the New York Times, Wall Street Journal, Huffington Post, and on WHYY TV, Philadelphia. In 2012, as part of an effort to promote innovative, wall-based work and help advance the dialogue around public art, Guinn founded Freewall, an outdoor space in Center City that featured temporary mural projects. Guinn teaches mural painting at Moore College of Art and Design and will be teaching a course at Arcadia in the spring of 2017 that will execute the public project at Glenside Station.

The panel discussion “What Makes a Successful Mural?”, which will serve as the opening event for this exhibition, will take place on October 10, at 6:30 PM in the University Commons Great Room. A reception will follow immediately in the Great Room Lobby. Both events are free and open to the public. The panel discussion is co-sponsored by the Department of Art and Design and the office of University Relations

This exhibition was curated by Matthew Borgen, exhibitions coordinator, and was made possible by a donation from Theresa and John Rollins. For more information about the show, please contact the Arcadia Exhibition Program at 215-517-­2629 or borgenm@arcadia.edu.