Faculty Exhibition 2014 is the first in a series of exhibitions and programs to celebrate the 30th Anniversary of Arcadia University Art Gallery at the Spruance Art Center.

Unlike previous exhibitions in this series, this year’s show has no prescribed theme. Instructors were invited to determine for themselves the work they wanted to exhibit. As most participants are represented by recent examples of their studio work, the show offers an up-to-date look at the current research and prevailing concerns of these artists and designers.

A number of shared interests become evident, some of which are conveyed directly in the hanging of the exhibition. Primary among the concerns of Jill Allen,Carole Loeffler, Betsey Batchelor, and Michael DeLuca is an investigation of abstraction in sculpture, painting, and drawing respectively. Each of these artists express a fascination for biomorphic forms that convey a presence and vitality that eludes—if not rejects—language and its certainties. 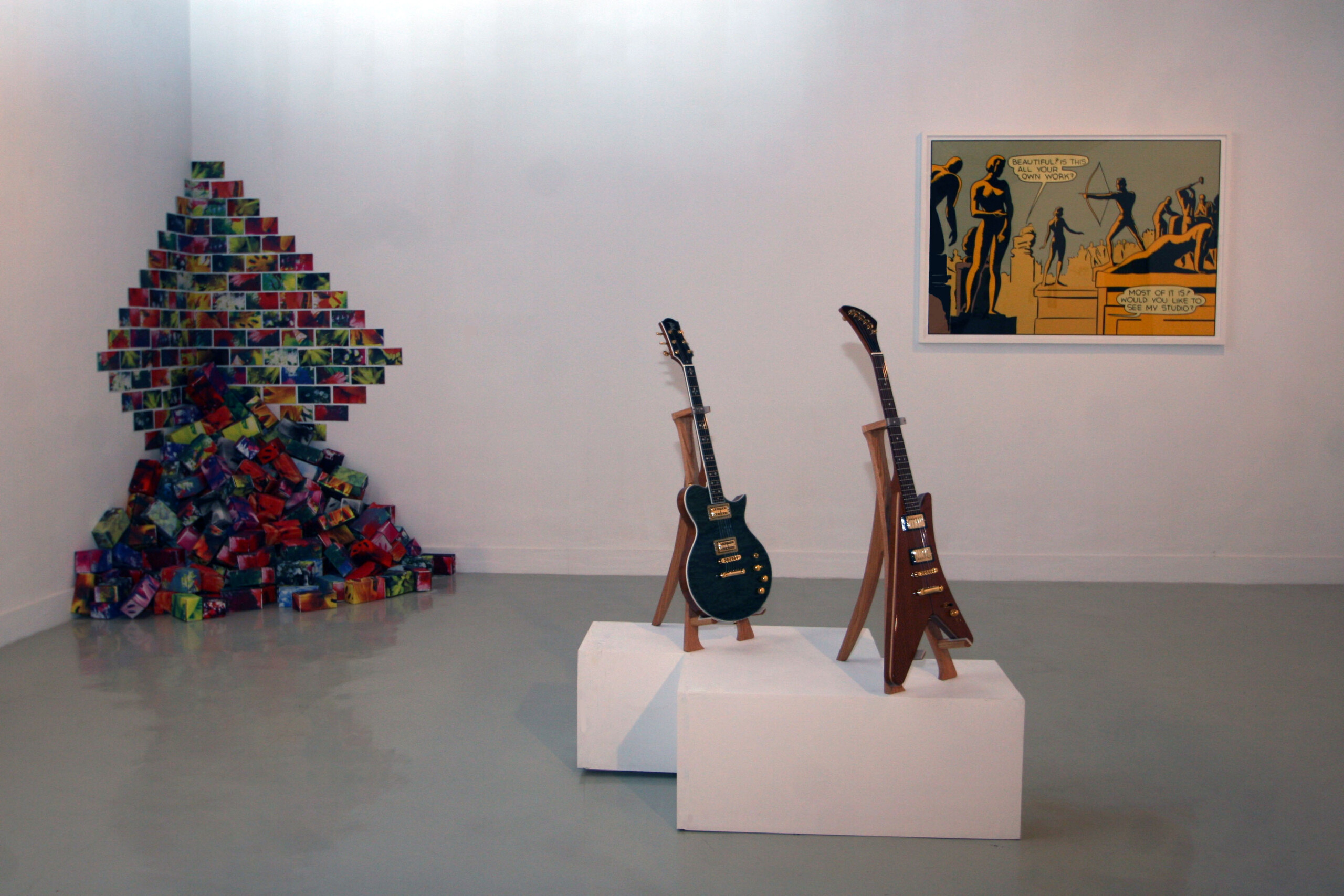 Conversely, Catherine Adams uses the authority of writing by impressing texts directly into each link of a sterling silver choke collar that explores the “unforgiving nature of law(s) that would restrain one group marked as animals, dangerous or undesirable”.  Likewise, David Copestakes employs a protest slogan in conjunction with the image of a time-clock placed well above the reach of young hands to reference the abuses of child labor.  This literal and rhetorical use of words to address topical social issues offers a foil to the more open-ended texts that animate appropriated images by Matthew Borgen and Maria DiMauro.  The captions beneath DiMauro’s mixed-media renderings of found photo portraits evoke fictional narratives for the page while Borgen’s speech bubbles, lifted straight from a trove of Golden Age comics, suggest a dialogue that could be occurring in the gallery about the exhibition itself.

Many of the works offer windows into various kinds of processes or articulate the spaces between complementary dimensions or practices. Justin Myer Staller’s installation features representations of “bricks” silkscreened onto masonite that appear to cascade from their fixed and flattened pattern on the wall to a pile of three-dimensional equivalents on the floor. Dan Emery’s framing study and pencil elevation for a house in Fort Washington and Joanne Pizzo’s documentation of buildings she completed for Shippensburg University and Delaware Valley College point to the beginning and end points of the architectural process. Similarly,Gregg Moore’s 161-minute videotape documents a seven-course, family-style meal he developed in collaboration with master French chef Pierre Calmels that was “performed” weekly over the course of the summer at the Philadelphia Art Alliance.  The interplay between the video’s use of sound and the ceramic tableware—designed by Moore and seen in use during the meal—strives to reconcile the distance between farm and table, the garden and the studio. 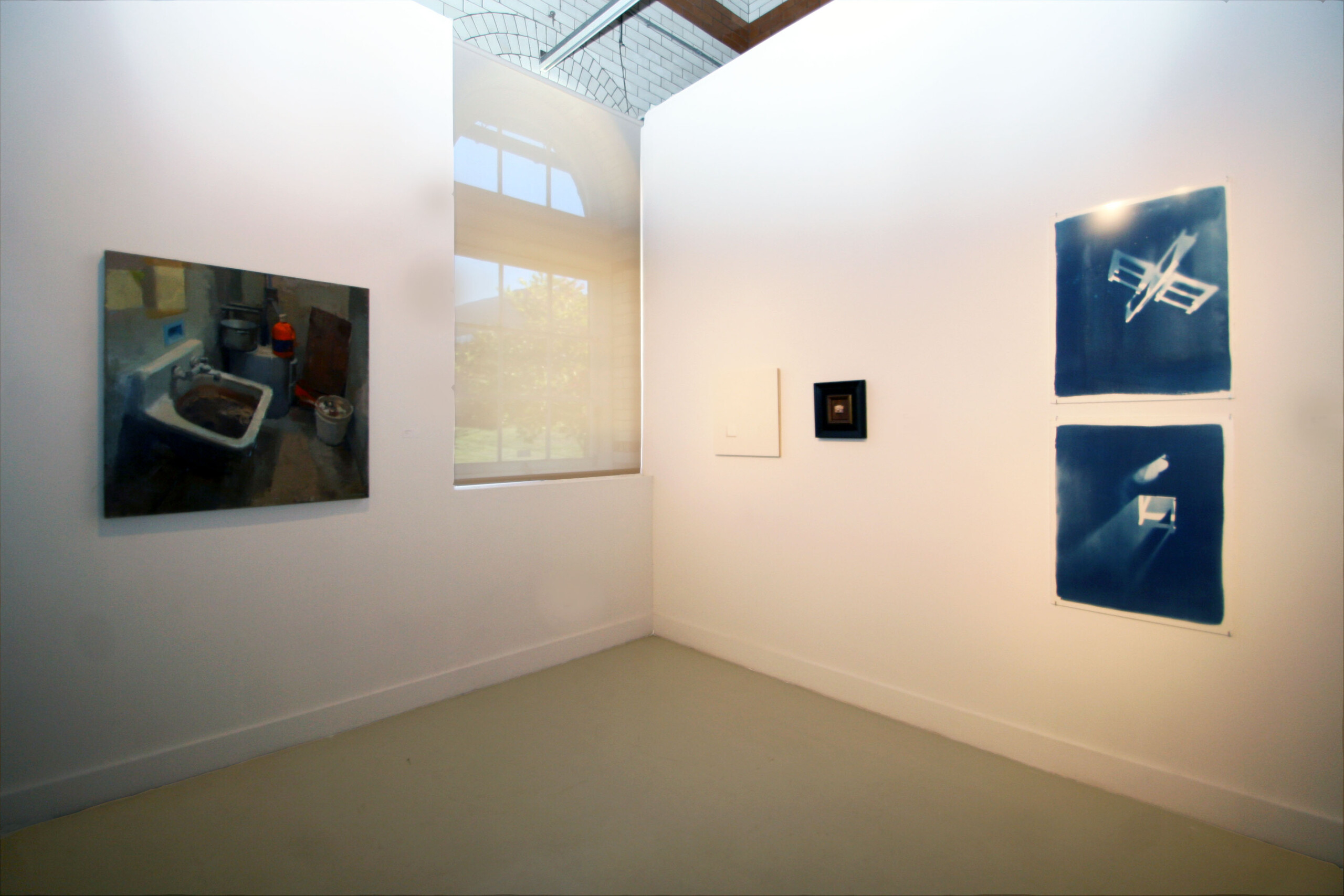 Scott Rawlins is represented by detailed drawings of stomach, kidney, and cochlear hairs (each executed years ago, one still bound in its original notebook) that eventually found their way onto the “covers” he designed for Human Anatomy and Physiology Society, a publication that exists only on-line. Stephanie Koenig’s wall-mounted sculpture with tablet displaying her own Tumblr feed points a related discrepancy between how we experience actual work in a gallery context and the experience of art on social media. Koenig’s conscious attempt to resolve these differences bears an affinity with the two works by Abbey Ryan, one representing her “painting a day project”—posted on daily on her blog—and an example of her ink paintings mounted on panel that employ the mathematics of the Golden Ratio.

The endurance and legacy of observational painting is demonstrated by three canvases executed by Aaron Thompson, Thomas Walton, and Allyson McCreery, all recent graduates of the Pennsylvania Academy of the Fine Arts. Questions of figuration, representation, and identity also inform the photography of June Yong Lee and Tamsen Wojtanowski. Lee’s pigment prints explore how the life stories of his models might be inscribed on the surface of the skin and legible to viewers of these portraits. Contrarily, Wojtanowski’s photograms suggest x-rays that have penetrated their opaque subjects—wooden miniatures fashioned after architectural details that she placed directly onto the photographic paper. Her cyanotypes update a primitive mode of camera-less photography first developed during the 19th century, an era that Karen Misher revisits in her own way in Blackbird, a glass vial and silver stopper encasing human hair that draws on the rich history of Victorian mourning jewelry.

Bob Mauro, chair of Arcadia’s Department of Visual and Performing arts, is represented to by two guitars that he completed specifically for the exhibition. The instruments rest on custom mounts he also crafted by hand. Together they stand as a singular example in this exhibition of an artist choosing to represent himself with works made outside of the discipline he teaches at Arcadia. As such, they suggest the diverse and often surprising range of skills required by all artists who teach. 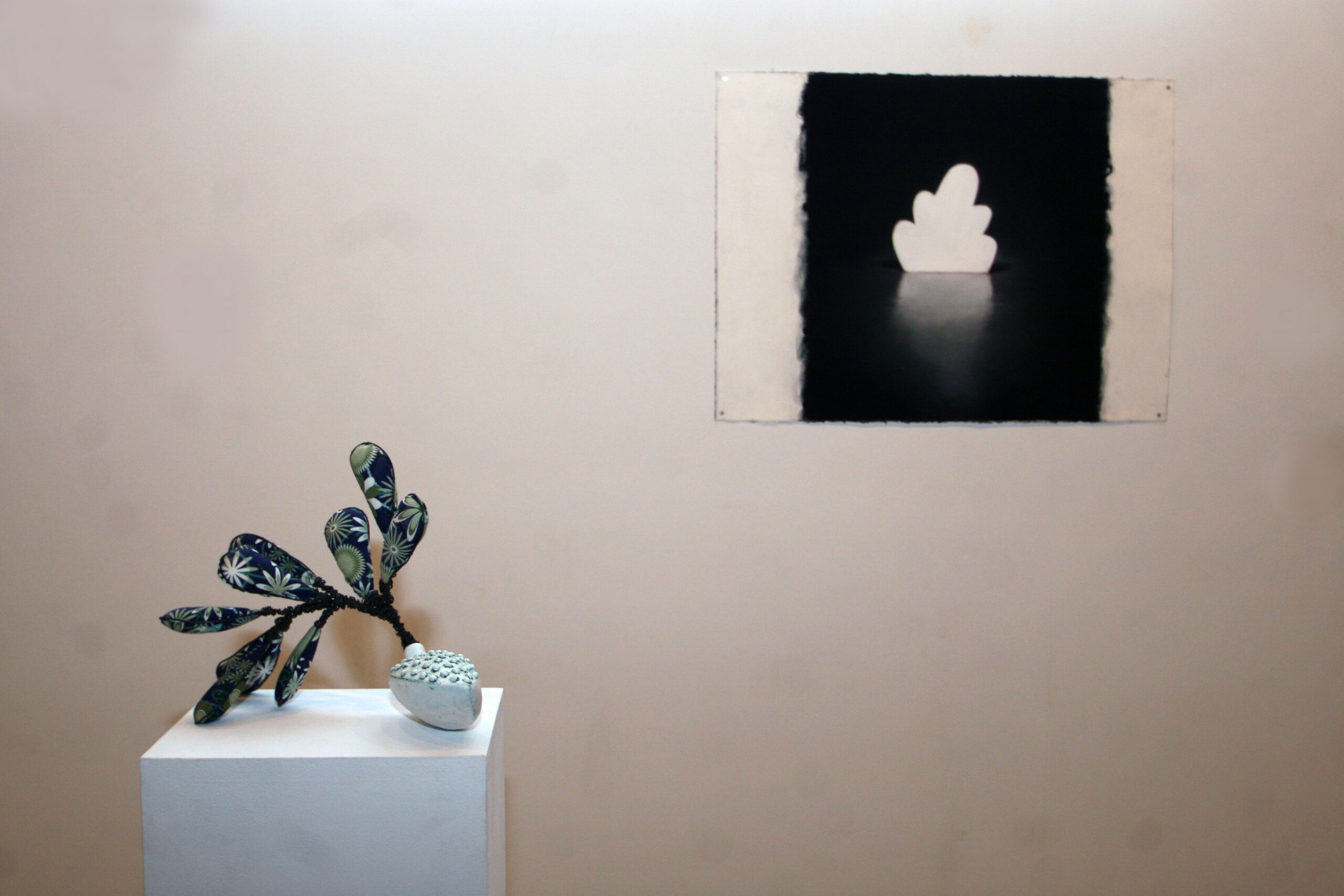