Arcadia University Art Gallery is pleased to present Free Play, an exhibition that explores works by an international array of artists who borrow from play and games to reveal social, philosophical, and cultural issues. Curated by Melissa E. Feldman, the show is organized by Independent Curators International (ICI), New York. Arcadia University Art Gallery is this touring exhibition’s debut venue. 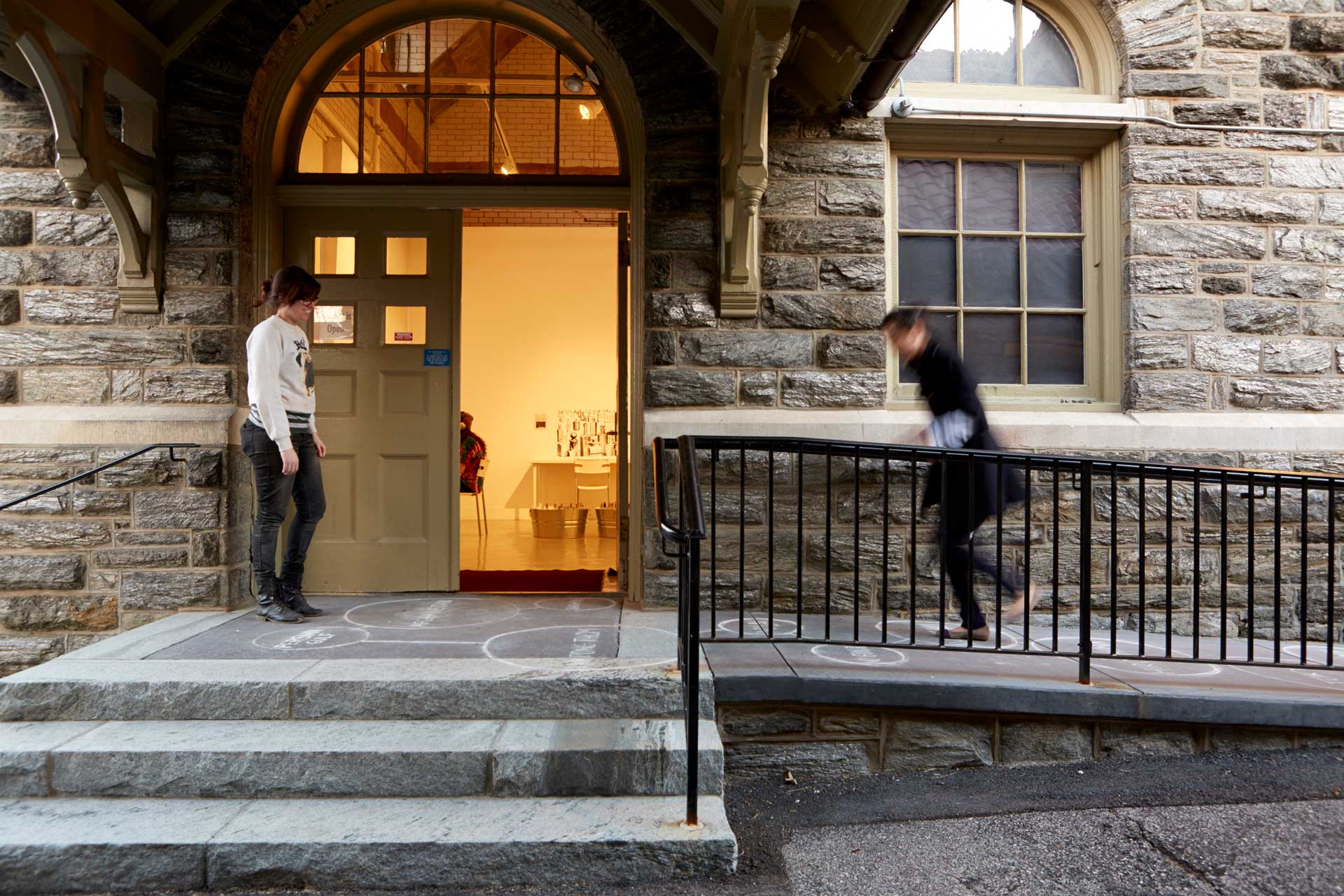 Free Play seeks the initial moment described by Guy Debord, a founding member of the Situationist International, an international group of social revolutionaries that emerged in the 1960s that aspired to find ways to liberate everyday life from the strictures of capitalism. “No vital periods ever began from a theory,” Debord stated. “What’s first is a game, a struggle, a journey.”

All of the works in the exhibition are functioning games, which gallery visitors are free to handle and play. Whether derived from the playground, the video arcade, the casino, or the rec room, each example serves to create experiences that reflect on contemporary socio-political conditions. Collectively, the works in Free Play explore interactivity, an expansive topic in both current art and exhibition-making with the migration of participatory and live art forms into the heretofore foreign territory of the gallery or museum. (Recent precedents set by major institutions—including the 2012 Whitney Biennial’s generous inclusion of performance works, Gabriela Burkhalter’s The Playground Project at the recent Carnegie International, and the current exhibition Playgrounds and Really Useful Knowledge at Museo Nacional Centro de Arte Reina Sofía—expand the context for the works in Free Play). 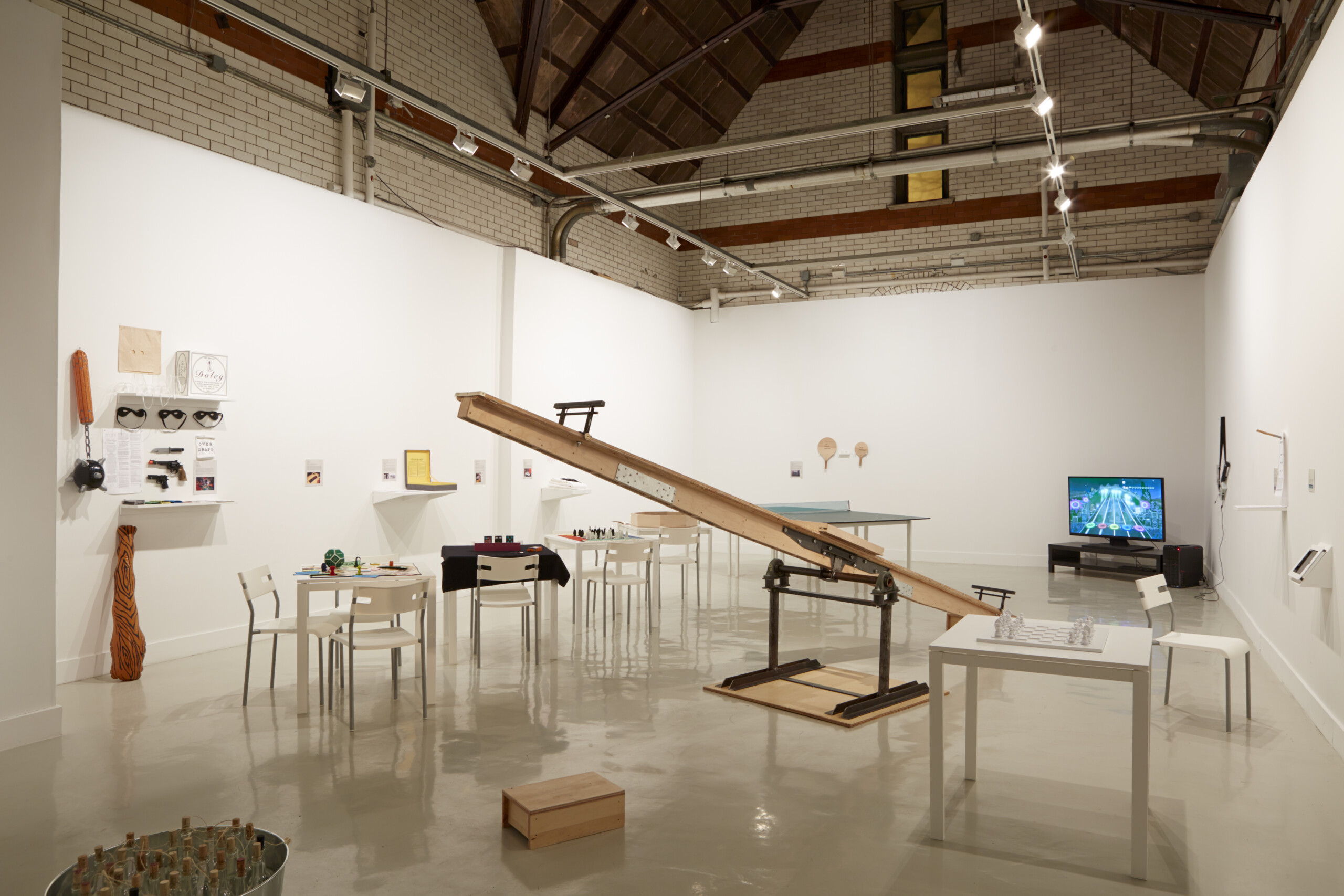 In her introductory text about the exhibition, Feldman writes: “Artistic processes tied to game playing have historically attracted the avant-garde, most famously the chess master Marcel Duchamp. His every artistic move had his chess partner in mind: you, the viewer. Games were also intrinsic to the work of war-addled Surrealists and Dadaists, the inventors of exquisite corpse and automatic drawing, in their quest to upend the bourgeois pretensions of art and free the artistic imagination. In the 1960s and 1970s, the counter-cultural and anti-war Fluxus group and the New Games Foundation questioned capitalism and corporate culture by staging massive public games in city parks. Moving away from the classical chess period of kings, queens, and bishops, the works in this exhibition do not represent medieval figures but strategies of decision-making around topical issues.”

Among the arcade of objects in the show is a version of “Guitar Hero” by Cory Arcangel, which the artist has reprogrammed to perform a variation of La Monte Young’s minimalist drone Composition #7 (1960) as a power chord. BOMBscotch (2013), a version of hopscotch by Mary Flanagan—an artist and professor of digital humanities at Dartmouth College—uses data from the United State’s most virulent attacks of the 20th and 21st centuries to reconsider the history of American aggression. The entirely white board and pieces of Yoko Ono’s Play It by Trust (1966) is one of three variations of chess in the exhibition that use inventive formal devices to subvert the competitive impulse behind this classic game. 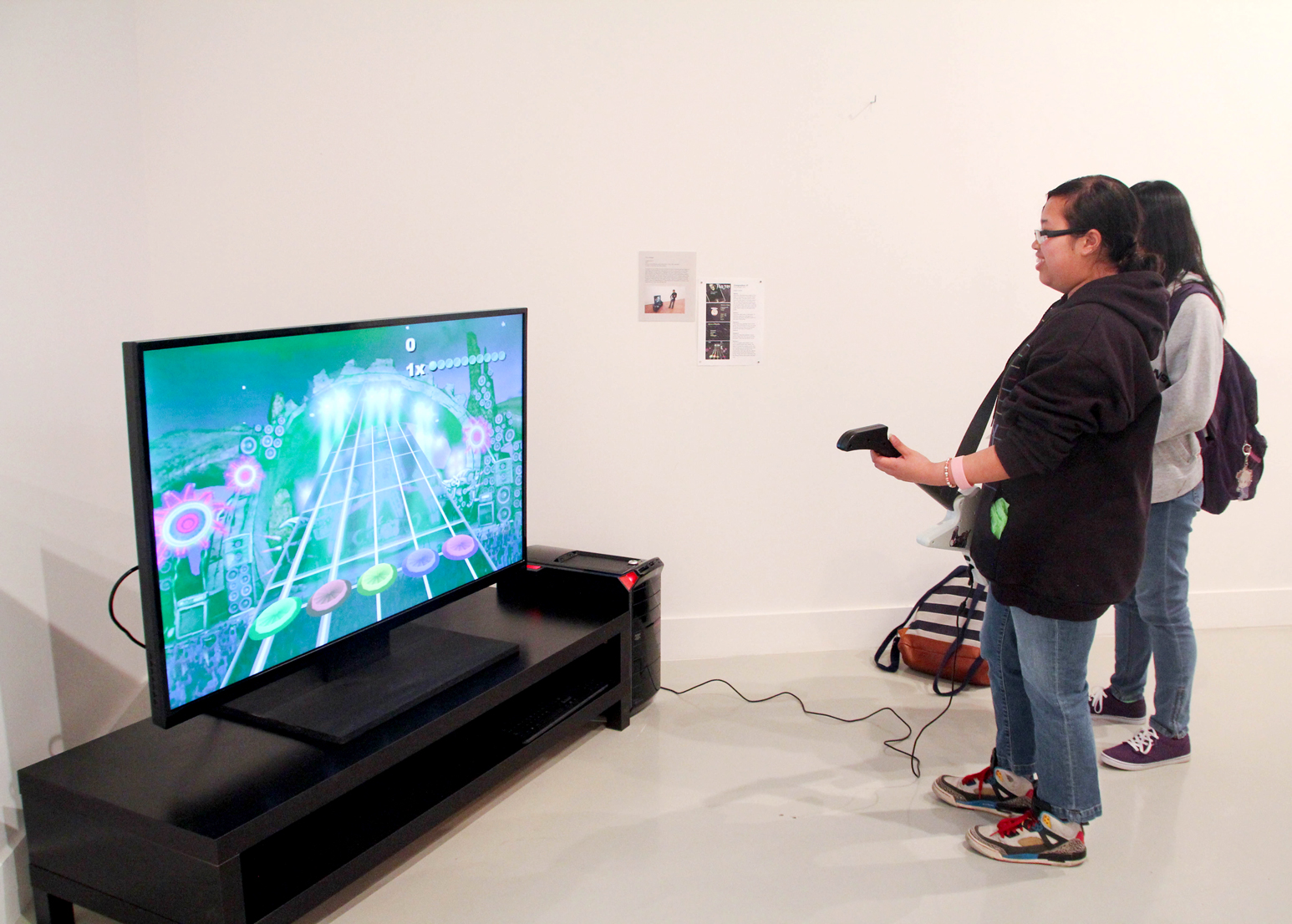 Philadelphia-based sculptor Jennie Shanker’s Shoot the Moon mounts a simple “get the ball through the chute” toy to the fulcrum of a seesaw. This work, originally completed in 1992 and refabricated expressly for Arcadia’s presentation of Free Play, explores what happens when two people are confronted with a choice between physical play and a competitive game. The negotiation of balance operating in Shanker’s piece finds a foil in the conspicuously unmatched scale of the paddles and balls in David Shrigley’s transformation of ping pong. Titled Your Parents, You, Your Wee Sister and The Social Services (2001), the work demonstrates the existential humor characteristic of this British artist.

While these and other examples require participation from at least two players, many of the works can be readily enjoyed by individual visitors. These include Jason Rohrer’s Passage (2007), a computer game by an individual who has emerged as one of the most prominent, independent designers in the field. Acquired for the Museum of Modern Art’s permanent collection in 2012, this deceptively simple, five-minute, quasi-autobiographical work is about life and the choices one makes along the way. Similarly, Erik Svedäng’s Blueberry Garden (2009) encourages players to explore the potentially endless adventures of an avatar in a mysterious, seemingly infinite landscape. This low-fi computer game, a response to the hyper-realistic style that dominates the industry, won first prize at the 2009 Independent Games Festival in San Francisco. 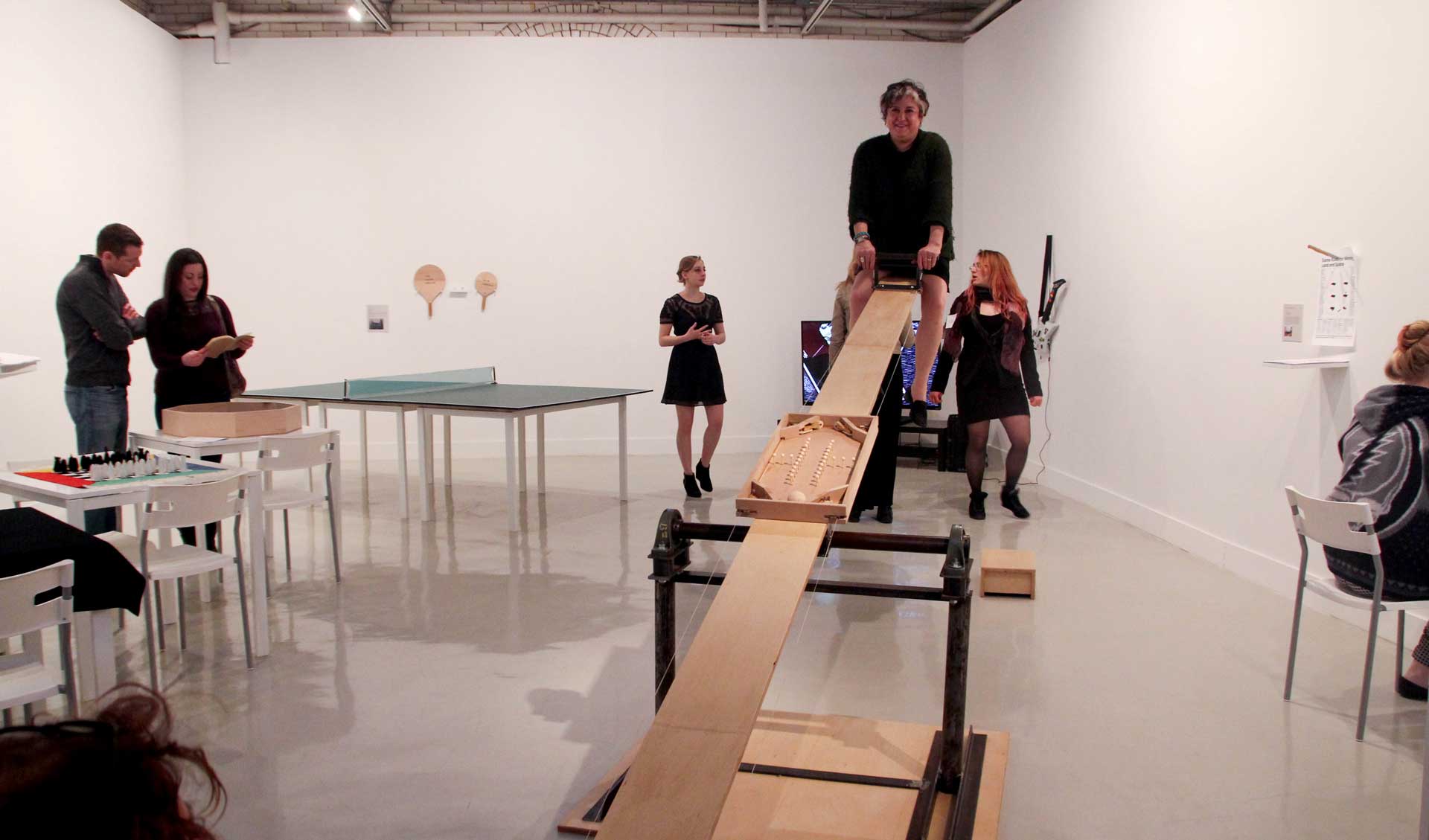 The themes of chance and personal destiny are taken up directly by Allan McCollum and Matt Mullican’s Your Fate (2004), which uses a set of 25 dice marked with symbols to create a divining game with the physical allure of a gambling table. Pedro Reyes’ Citileaks (2011) invites viewers to write secrets or confessions on sheets of paper and roll them inside an empty bottle to be read only by others who have done likewise. An exercise that takes the mythical notion of the “message in a bottle” to reflect on pressing questions about security and privacy in the digital age, the work exemplifies Reyes’ interest in promoting individual and communal agency that are at the core of the exhibition.

Melissa E. Feldman is a Seattle-based independent curator and writer who has contributed to Art in America, Frieze, Third Text, and Aperture, among other publications. Her recent exhibitions include Dance Rehearsal: Karen Kilimnik’s World of Ballet and Theatre (organized by the Mills College Art Museum, Oakland and which travelled to the Museum of Contemporary Art, Denver); Afterglow: Rethinking California Light and Space Art, Hearst Art Gallery at St. Mary’s College, Walnut Creek, California; and Sampler: Textiles at Creative Growth at Creative Growth Center, Oakland. Feldman has taught at the California College of Art, the San Francisco Art Institute, and Goldsmith’s College, and is credited with organizing the first one-person American museum exhibitions for Kilimnik, Martin Kippinberger, and Hiroshi Sugimoto in the early nineties as a curator at the Institute of Contemporary Art, Philadelphia. 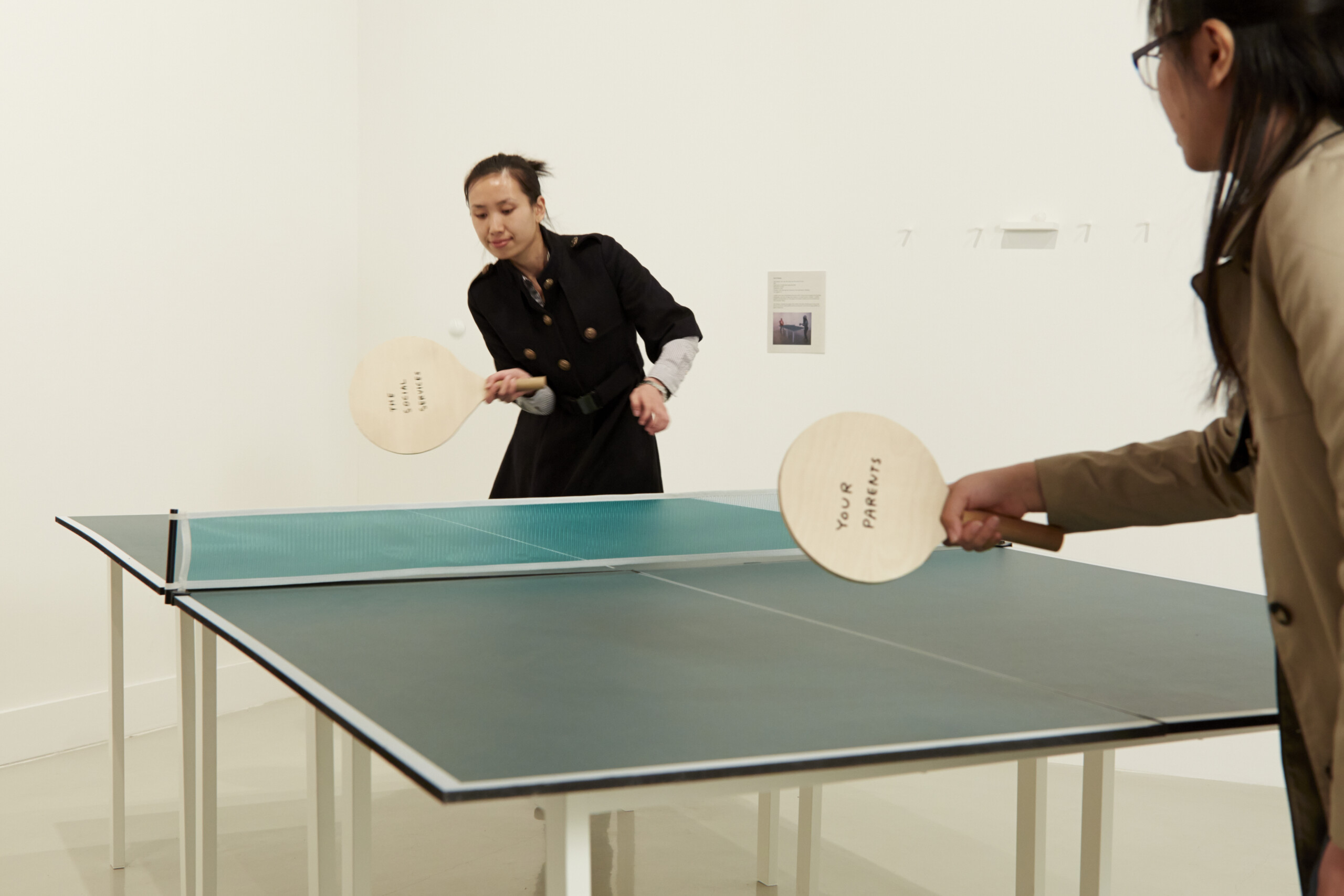