The Arcadia University Art Research Collaboration (ARC) Exhibition Program is pleased to announce the presentation of a new gallery exhibition based on the work of cartoonist Jamar Nicholas. The exhibition, to be displayed in the University’s Great Room Lobby from October 28 through February 16, 2014, presents a look at how Nicholas approaches the process of world building, the crafting and designing of the imaginary worlds found in his illustrations, comic strips and graphic novels. 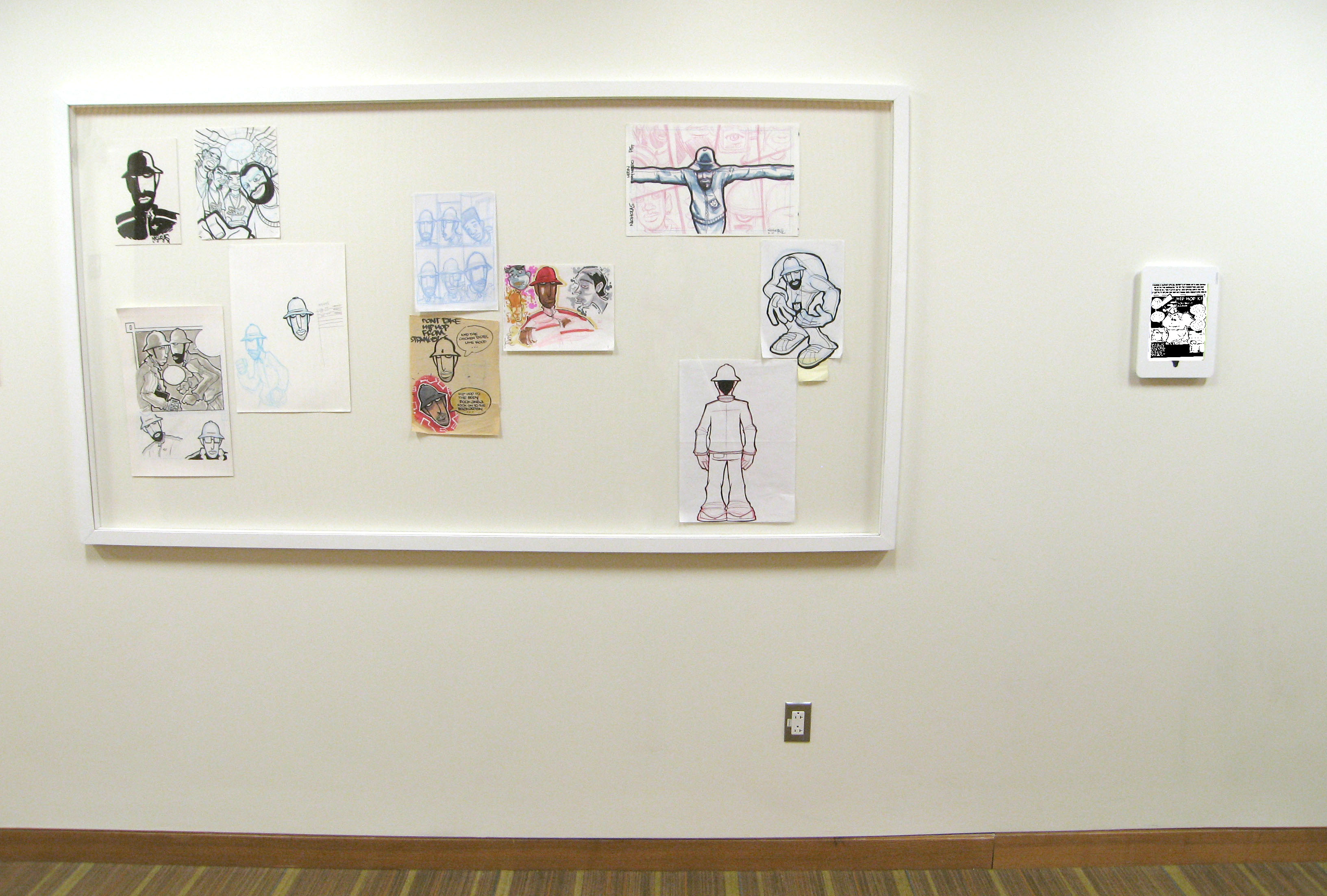 This exhibition examines the development of three of Nicholas’s distinctly different characters: Detective Boogaloo, a hip-hop cop from a web comic first appearing in 2001 on filmmaker Kevin Smith’s website moviepoopshoot.com, Nicholas’s graphic version of Geoff Canada, a boy growing up surrounded by violence in the Bronx from Fist, Stick, Knife, Gun, the graphic novel based on the memoir of social activist and educator Geoffrey Canada, and Leon a latch key super hero from Leon: Protector of the Playground.

Before these characters can exist in the panels of Nicholas’s art, he must understand fully the environments they will inhabit. Each character must exist in their own specific space, exhibit a unique appearance and personal expression, and be surrounded by a diverse range of relatable, supporting characters. 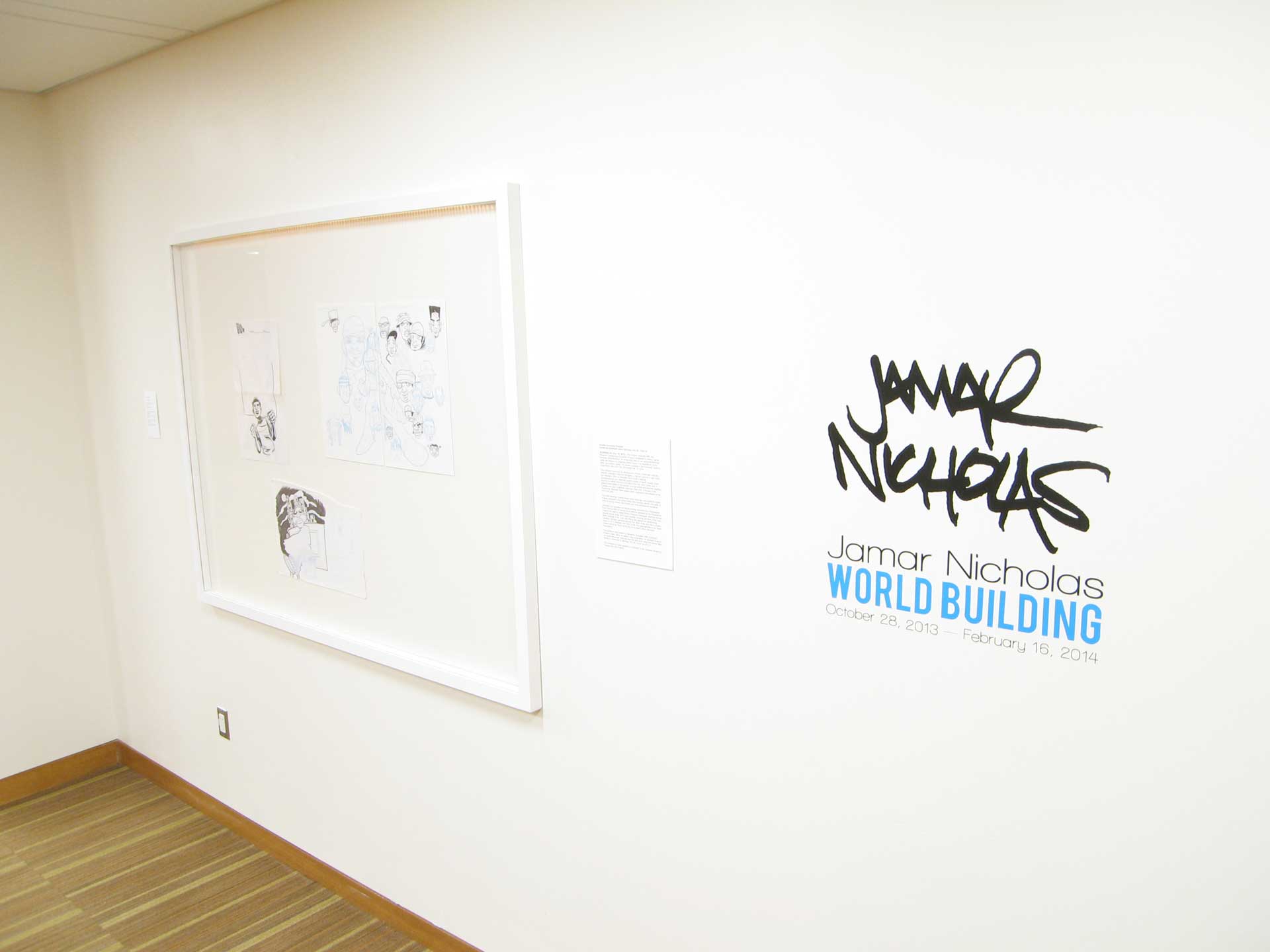 The initial sketches, finished bristol board drawings, and published digital images presented in this exhibition reveal to the viewer what Nicholas must first visually articulate for himself prior to the creation of the published work, in order to convey unique, fully- formed, and multi-dimensional narratives.

Jamar Nicholas is an educator and award-winning cartoonist from Philadelphia, PA. From 2003 to 2005 he served as the editorial cartoonist for the Philadelphia Tribune, the Nationʼs oldest African American newspaper. In 2010 Nicholas adapted Geoffrey Canadaʼs personal account of his childhood, Fist, Stick, Knife, Gun into graphic form, and was recognized by the Glyph Comics awards which are presented annually for the best comic art created by, for, or about people of color. Nicholas received a Rising Star Award, while the book itself received awards for Story of the Year and Male Character of the Year (Geoff). In 2011, Fist, Stick, Knife, Gun was also included on the list, Great Graphic Novels for Teens by the Young Adult Library Services Association (YALSA). His latest graphic novel, Leon: Protector of the Playground, is expected to be released at the end of the year.

The exhibition was curated by Samantha Schaeffer (ARC Exhibition Program Intern). The exhibition will open with a reception and panel discussion, featuring Nicholas, and artist Mike Manley, to be held on October 28, 2013 from 6:30- 8:00pm. More events scheduled in conjunction with this exhibition will be announced.

This exhibition was made possible by a donation to the Gateway Society by Theresa and John Rollins.

The exhibition will open with a panel discussion, featuring Nicholas, and artist Mike Manley, moderated by Matthew Borgen, exhibitions coordinator, in the University Commons Great Room beginning at 6:30 PM. A reception will be held immediately afterward in the Great Room Lobby. Both events are free and open to the public.