Arcadia University’s Office of University Advancement in partnership with the Office of Alumni Relations is pleased to announce the opening of “Jane Geayer: Harmonious Geometries,” on display in the Commons Art Galleries through Aug. 21.

This exhibition focuses on the artistic legacy of  Jane Geayer (1935-2000), a 1956 Beaver College graduate whose career as a studio artist, teacher, and designer spanned nearly four decades. Curated by Exhibitions Coordinator Matthew Borgen, the show features works that are drawn from the inventory of paintings, drawings, and prints provided to the University by Geayer’s estate after her passing. These pieces were entrusted to the University to be sold to support a named scholarship in her honor. This collection, which includes examples of still lifes, landscapes, and abstract compositions surveying Geayer’s entire career, reveals an artist of great intellectual dexterity, capacity, and curiosity. 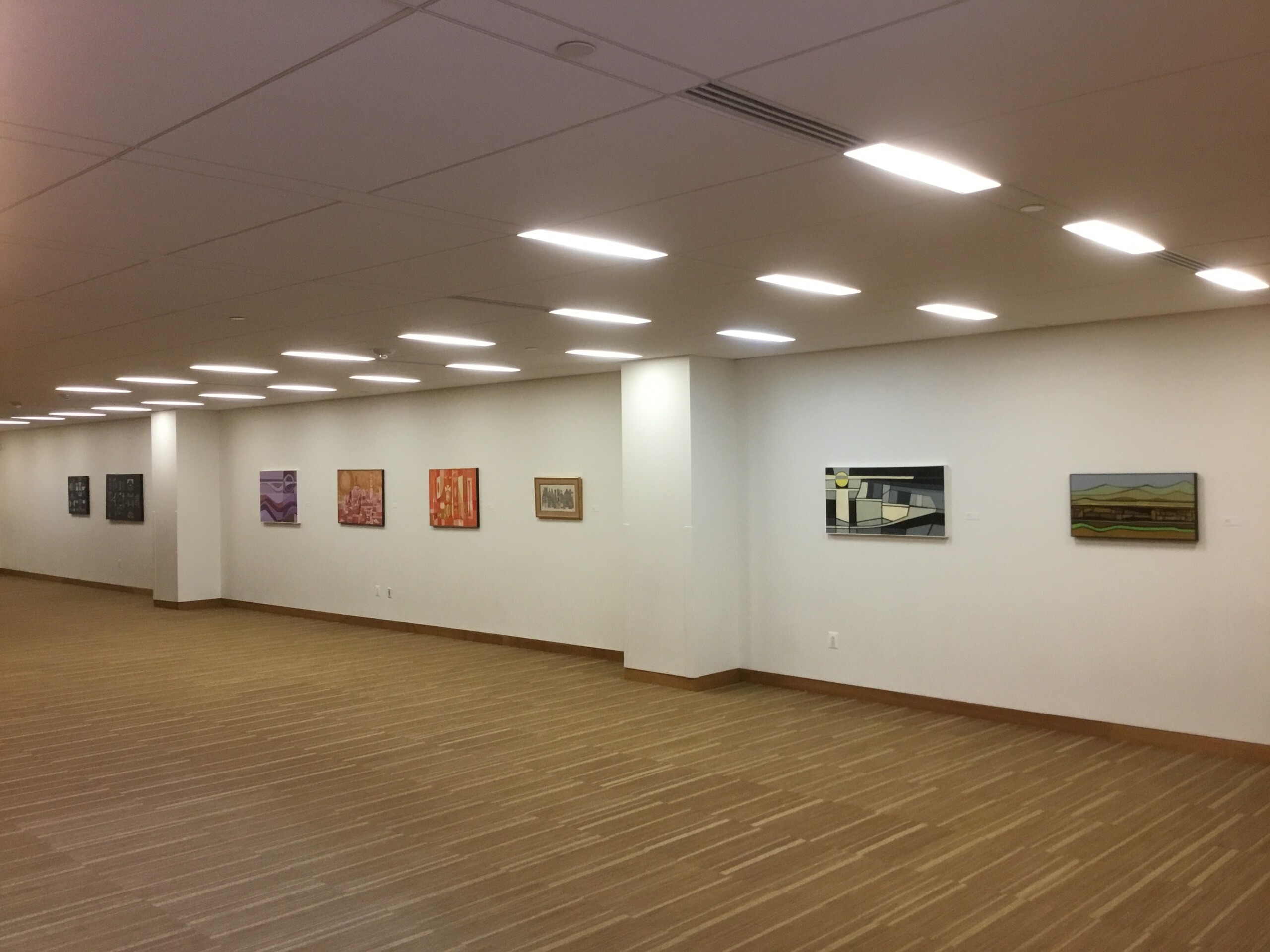 In her studio paintings and prints, Geayer generally utilized arrangements of single-colored shapes rendered in a solid, graphic style devoid of texture or tonal variation, no doubt influenced by her background in advertising and commercial design. Absent from the work is any illusion of atmospheric perspective or any substantial figure ground relationship. The result for the viewer is an awareness of the immediacy and flatness of the picture plane, which serves to emphasize the deliberate structure of her compositions. For Geayer, subject matter seems secondary to her foremost goal as an artist, which she described as achieving a pattern in her works, “in which color and shape are balanced to create a geometric harmony.”

The 22 paintings and single print chosen for this exhibition explore this central preoccupation in Geayer’s creative process by focusing on the interaction between geometric abstraction and the traditional landscape, both as subject matter and compositional strategy.

Indicative of this important interplay in Geayer’s work is one of the earliest pieces included the exhibition, Marble Maze (1958). The shapes in this print evoke a fantastical iteration of any small, ancient hamlet in Europe. Despite the implication indicated in the title, no means is offered to visually enter or exit this city. Geayer is utilizing the facade created by the cityscape as a delivery system for an aggregation of flat forms. 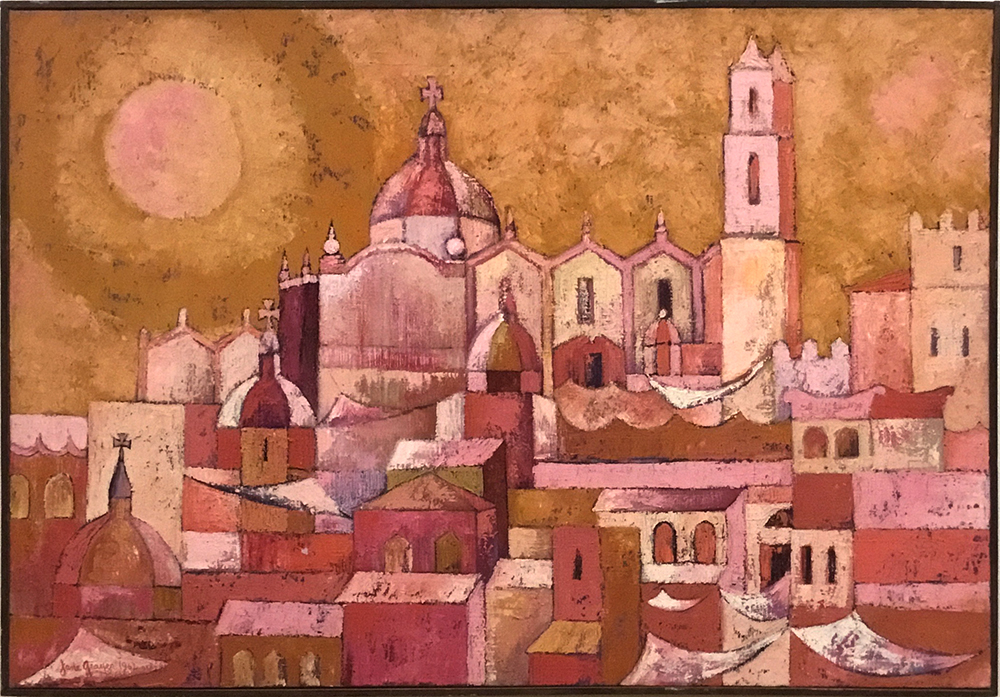 This is not to say that the locations that Geayer chose as the subjects of her paintings feel somehow arbitrary or unimportant. As the artist herself stated, “I don’t paint on site. I’m apt to take impressions from color, shape, light and shadow and transpose them later on.” So, for Geayer, the landscape is not merely a pretense for presenting compositions of abstract shapes, but is also a source of inspiration. This is demonstrated not only by the fact that the majority of her works reference landscape but also by the variety of terrains she utilized as subjects and the vibrant colors in which they were lovingly rendered.

Geayer also emphasizes the importance of place through the specificity of her titles. Examples of this include works such as Tanzanian Fantasy (1976), Spanish Lunch (1977), The Cliffs of Mohair (1984), and Lugard Falls (c.1984), while only a relative few, such as Field (c. 1974) and Winter’s Tale (1999) feel completely imagined.

The show also includes several examples of compositions devoid of obvious outside reference such as Red Screen(1959) and the works from her Circle Series (1968 – 1972). However, within the context of this exhibition, where the large circles and horizontal rectangles in these abstract paintings are considered in proximity to the suns and architectural structures contained in her more referential works, the influence of the landscape is readily apparent. 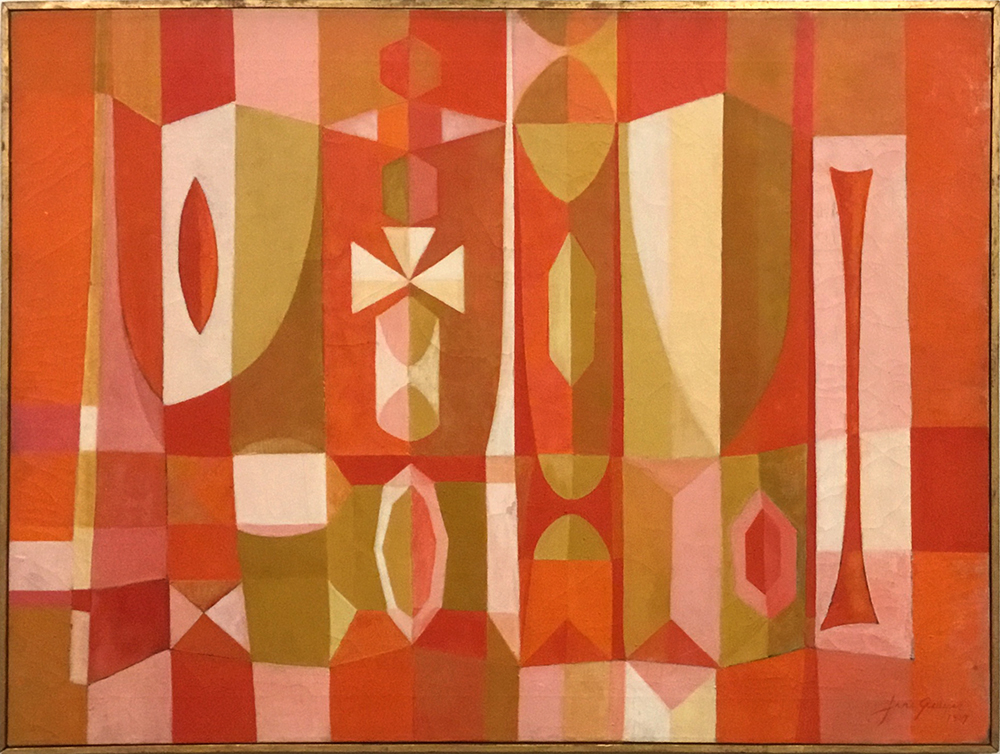 During her lifetime Geayer exhibited throughout the northeastern United States in group exhibitions at the Newark Museum, the Montclair Art Museum, the New Jersey State Museum, the Philadelphia Art Alliance, and the Guild of Creative Art in Shrewsbury, New Jersey, of which she was a founding member. Through these pursuits, as well as her teaching and commercial endeavors this longtime resident of Sea Bright, New Jersey sustained herself as a relevant and vital source of creative activity, enhancing her community throughout her entire adult life.

Jane Geayer’s creativity continues to be a positive influence on the experience of students who attend her alma mater. The Jane Geayer ’56 Endowed Scholarship continues to be awarded to undergraduate students with financial need with preference given but not limited to juniors pursuing courses of study in Fine Arts and Creative Writing.

In keeping with this directive, all works presented in this exhibition will be available for sale, with all proceeds going to the enrichment of the scholarship fund.

The realization of this exhibition is made possible in part by a donation to the Gateway Society by Theresa and John Rollins.