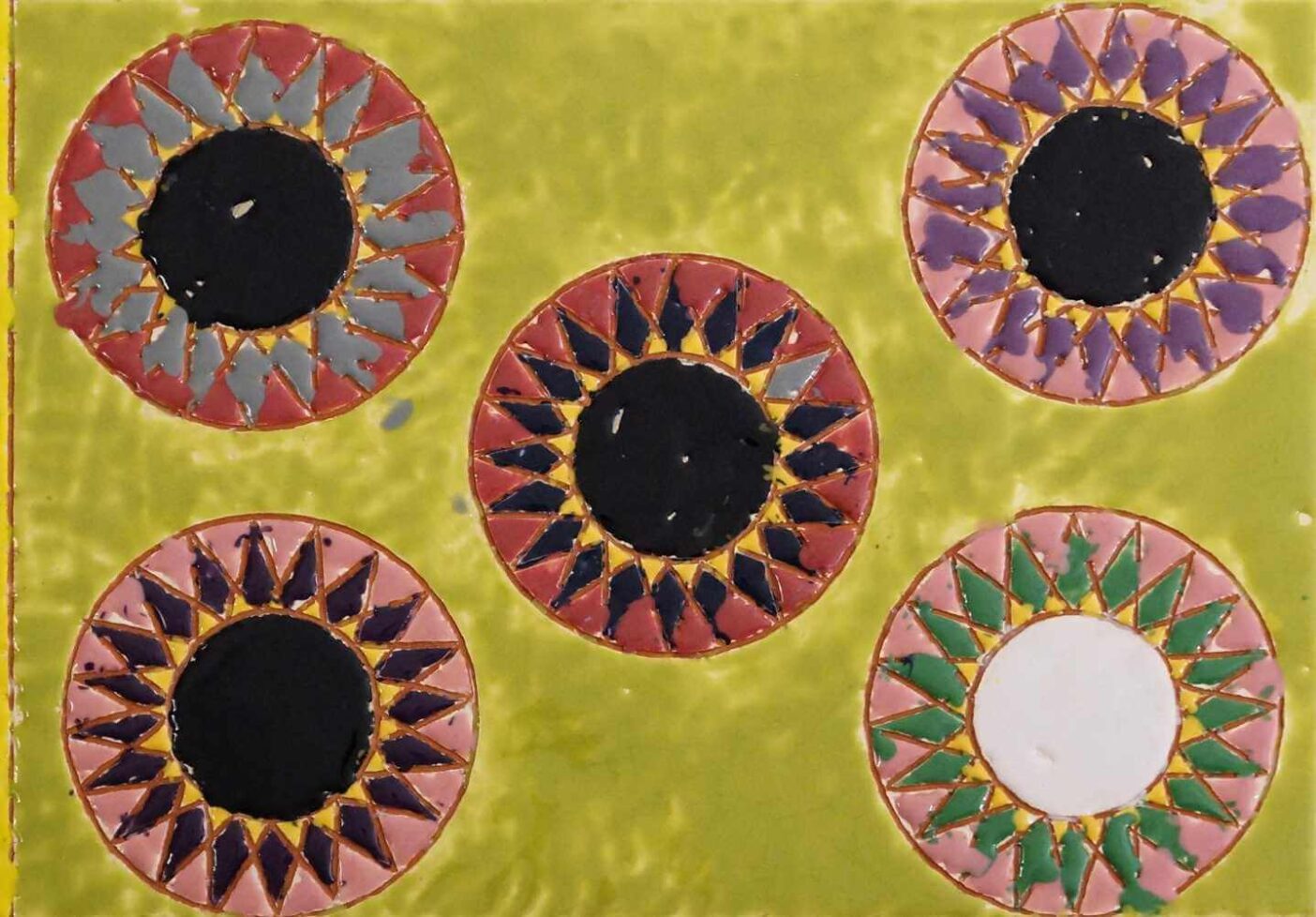 Arcadia Exhibitions is pleased to present “Polly Apfelbaum: For the Love of Una Hale”, on view from February 3 through April 17, 2022. Handcrafted during an extended residency at Arcadia University, Polly Apfelbaum’s new ceramic works will be contextualized by site-specific wallpapers in the Rosedale Gallery, and an exhibition of works by noted Pennsylvania folk artist and antiques dealer David Ellinger (1913-2003). “Out of the Heart: The Life and Art of David Ellinger” will be concurrently on view in the Harrison Gallery, University Commons.

“The goal is to interpret the personal as political,” said Apfelbaum, citing her long history of working with materials associated with craft, the everyday, installation, and space of the gallery. “I’m starting to look back at my history, where the inspiration came from, and how my personal experiences relate to the complex life and work of the painter David Ellinger.”

The exhibition will be accompanied by a series of public programs and a publication featuring essays by Tessa Bachi Haas, Wayne Koestenbaum, Lisa Minardi, David Pagel, Jenelle Porter, Jenni Sorkin, and Richard Torchia, and a transcription of a studio conversation with Apfelbaum, Gregg Moore, Rachel Geisinger and Elizabeth Ferrell, moderated and introduced by Ezra Shales. Together with “Out of the Heart: The Life and Art of David Ellinger”, an exhibition curated by Lisa Minardi, executive director of Historic Trappe, “For the Love of Una Hale” explores Pennsylvania German art and celebrates Ellinger’s multifaceted creative output as an antiques dealer, a gardener, a prolific artist, and drag show performer (Una Hale).”

Major support for “Polly Apfelbaum: For the Love of Una Hale” and “Out of the Heart: The Life and Art of David Ellinger” has been provided by The Pew Center for Arts & Heritage with additional support from Creative Capital.

Polly Apfelbaum (b. 1955) received her BFA from Tyler School of Art, Elkins Park, Pennsylvania. She has lived and worked in New York City since 1978 and since her first one-person-show in the city in 1986 has shown consistently in the United States and internationally. Her most recent solo exhibition, “Haystack Hands”, was presented in conjunction with a residency at the Haystack Mountain School of Crafts (Deer Isle, Maine) in 2019. Other recent shows include “Waiting for the UFOs (a space set between a landscape and a bunch of flowers)” at Ikon (Birmingham, UK) and Kemper Museum of Contemporary Art (Kansas City, Missouri), “Happiness Runs” at Belvedere 21 (Vienna), “Dubuffet’s Feet, My Hands” at Frith Street Gallery (London), as well as “The Potential of Women” at Alexander Gray Associates (New York).

A major mid-career survey of her work debuted at the Institute of Contemporary Art, Philadelphia in the summer of 2003 and traveled to Cincinnati, Ohio and Kansas City. Another exhibition in Philadelphia, “Polly Apfelbaum + Dan Cole: For the Love of Gene Davis” was presented in 2014 by Temple Contemporary as part of Tyler School of Art’s Distinguished Alumni Mentoring Program.

A sampling of recent group exhibitions includes “ABstranded: Fiber and Abstraction in Contemporary Art” at the Everson Museum of Art (New York), “Taking Space: Contemporary Women Artists and the Politics of Scale” at Pennsylvania Academy of Fine Arts (Philadelphia), “Out of Place: A Feminist Look at the Collection” at Brooklyn Museum (New York), “Maneuver”, at The Artist’s Institute at Hunter College (New York), “What Beauty is, I know not” at König Gallery, Berlin, “Via Appia” at Galerie nächst St. Stephan, Vienna, and “Less Is a Bore: Maximalist Art & Design” at ICA Boston.

The Pew Center for Arts & Heritage is a multidisciplinary grantmaker and hub for knowledge-sharing, funded by The Pew Charitable Trusts, dedicated to fostering a vibrant cultural community in Greater Philadelphia. The Center invests in ambitious, imaginative, and catalytic work that showcases the region’s cultural vitality and enhances public life, and engages in an exchange of ideas concerning artistic and interpretive practice with a broad network of cultural practitioners and leaders.