. . . [the gallery] removed one of its temporary walls to expose the original subway-like tiles behind it, a brilliant idea for this exhibition.

Subway Therapy features approximately 2,000 anonymous sticky notes posted by commuters on the walls of New York’s Union Square and 14th Street/6th Avenue subway stations in the days immediately following the 2016 presidential election. Prompted by a single hand-drawn sign posted by the artist inviting passersby to “express themselves”, the sticky notes remained on the subway walls for five weeks, eventually numbering over 50,000 and spreading to other New York City stations and public transportation systems in Boston, San Francisco, Seattle, Chicago, and Toronto. 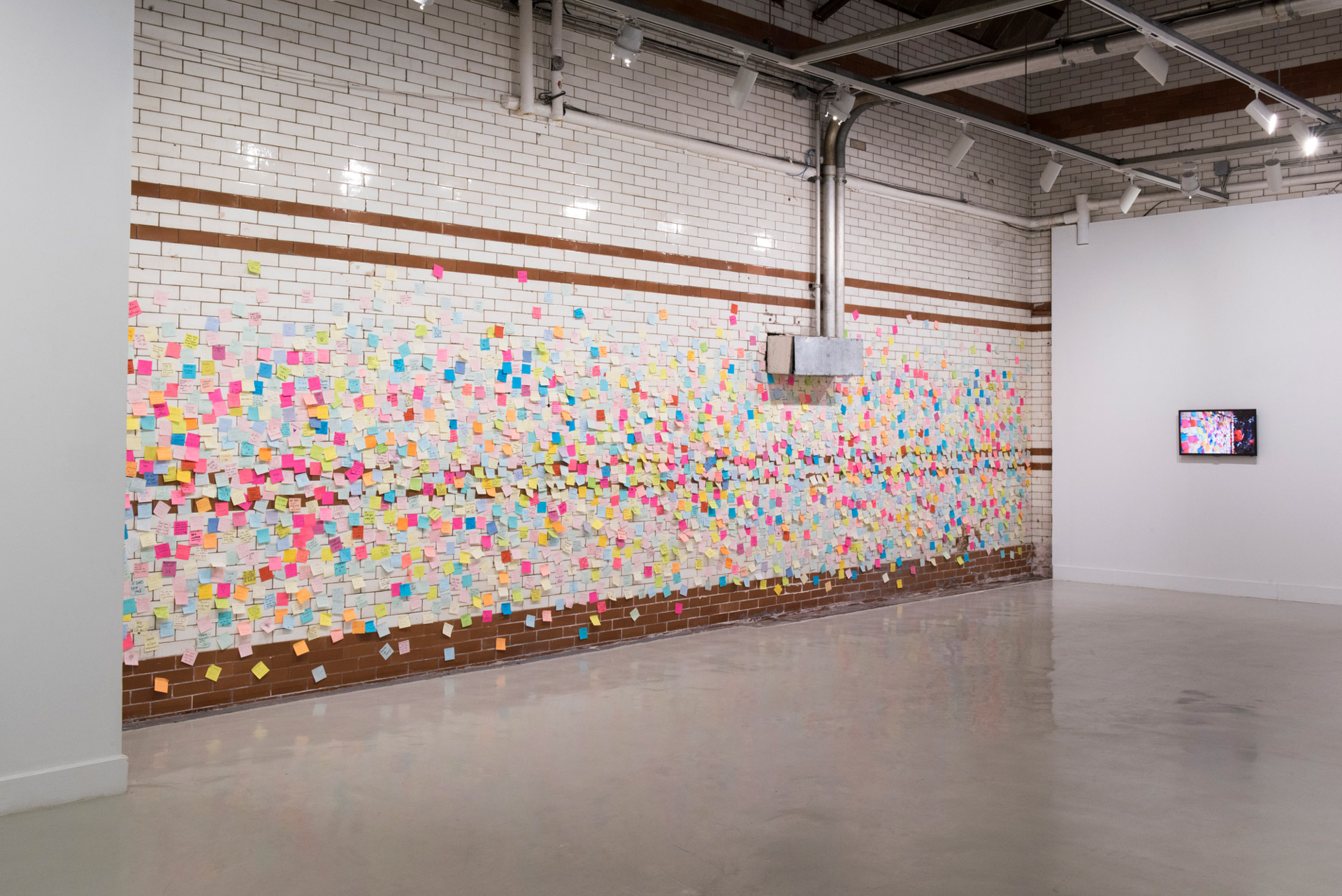 Each of the project’s original 2,000 sticky notes presented in this exhibition are inscribed with a short message that conveys the unfiltered thoughts and feelings of New Yorkers in response to the surprising outcome of the election. The notes represent a fraction of approximately 50,000 total sticky notes that covered Union Street Station and the walls of the tunnel connecting Union Square to 7th Avenue’s 14th Street Station from Nov. 9 to Dec. 16, 2016 when the Manhattan Transport Authority removed the notes with Levee’s cooperation.

Despite the diversity and candor of the viewpoints represented, including notes conveying frustration and fear, the majority are distinguished by their uplifting and respectful tone and their messages of hope, unity, and tolerance. Some comment directly about the project itself, such as one that declares “This is the wall that matters!”

The New York messages, curated by the Brooklyn-based artist for this show, are mounted on a wall of glazed bricks—original to the 1892 historic power plant that now houses the gallery—that has been exposed expressly for this presentation. Not only does the exhibition at Arcadia provide viewers with an opportunity to study the notes as a set of contemporary artifacts, but also extends the interactive project, as visitors are encouraged to contribute their own messages on the opposing wall.

On Nov. 10, 2016, within 24 hours after the first sticky notes appeared, the New York Times called the project “a tribute to the city’s diverse voices, a monument to its drive to speak out and a testament to the strength that New Yorkers, in moments of intense emotion, often draw from one another.” A month later, New York Governor Andrew Cuomo announced that 4,000 of the notes would enter the permanent collection of the New-York Historical Society where they have joined other artifacts demonstrating “spontaneous moments of crisis or exhilaration,” including objects recovered from Ground Zero, archived at the institution.

Subway Therapy’s outpouring of anonymous communication began nine months before Election Day as part of an ongoing public performance devised by Levee. Equipped with a portable “office” comprised of a table and two folding chairs placed against the subway wall, he initiated the project by inviting commuters to write their secrets into a book. His interest in offering forms of “spontaneous absolution” and “channeling energy into something good” led him to enacting the role of a therapist with whom passersby could share their troubles. Though not licensed as a therapist, Levee’s interest in making a positive difference in people’s lives, coupled by his natural ability to listen, encouraged him to develop this way of working. The name he chose for his persona as an artist invokes the restorative role of his work by referencing an embankment built to prevent the overflow of a river. 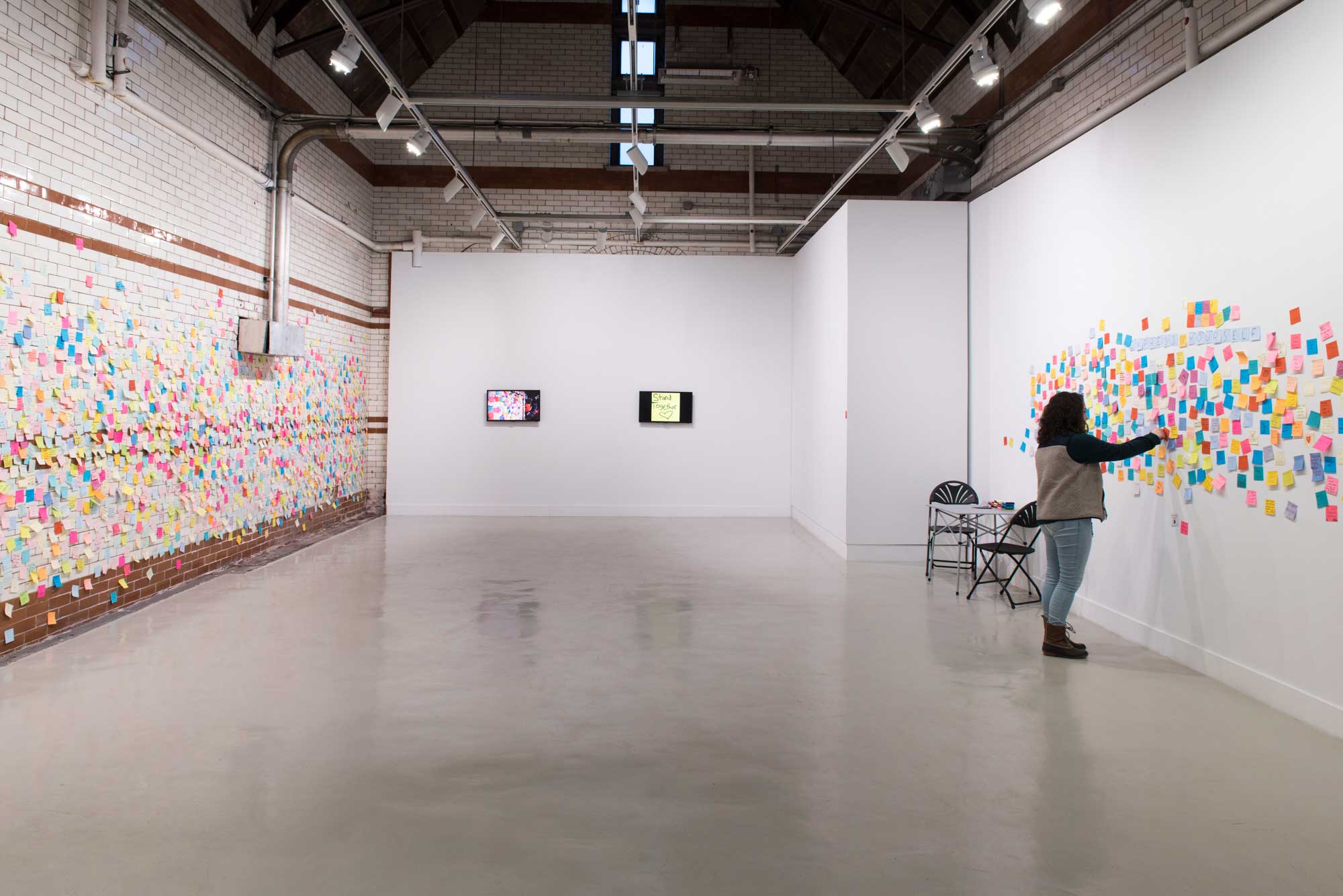 The day after the election, anticipating that New Yorkers would need an outlet for their emotions, Levee set up his table in the tunnel that connects the 14th Street stations at Seventh Avenue and the Avenue of the Americas. In addition to his usual props, he brought a supply of pens and sticky notes. On the subway wall above his table he posted a sign with the simple prompt, “Express Yourself.” Commuters immediately began to contribute their own messages. Encouraged by the spontaneous participation, he remained in the station until 2:00 AM, heading home with over 2,000 notes he took down from the wall. He returned the next day to the same location to discover that commuters, inspired by his example, had started a similar wall of notes at Union Square Station. Within days the project had spread to commuter lines in Boston, San Francisco, Seattle, Chicago, and Toronto. Back in Manhattan, the tunnel of sticky notes had become a destination. Since its dismantling on Dec. 16, 2016, Levee has set up his table and notes at other locations throughout the city as part of his ongoing daily practice.

“I wanted to give people the opportunity to express something without talking about it,” said Levee. “I started the project so people could have a channel to express their thoughts, feel less alone, and also become exposed to opinions different from their own. Subway Therapy is about inclusion, stress release, and peaceful expression.”

Levee’s project represents a hybrid form of communication, an amalgam of crowd-sourced public art, installation, and social practice. While the hand-drawn messages might resemble protest placards, their small scale and ephemeral nature circumvent vitriol, lending them a quiet intimacy appropriate to Levee’s aspirations. In the age of social media, Subway Therapy offers an unexpected demonstration of the “viral” in analog form that continues to spread around the globe.

Levee will lecture about the project on March 7, at 6:30PM in the Great Room of the University Commons. His talk—”I don’t understand, but I will try. We need each other.”— titled after one of the notes, will chronicle the evolution of Subway Therapy, address the importance of human connection in a divided sociopolitical environment, and explore what artist Allan Kaprow called the “blurring between art and life.” 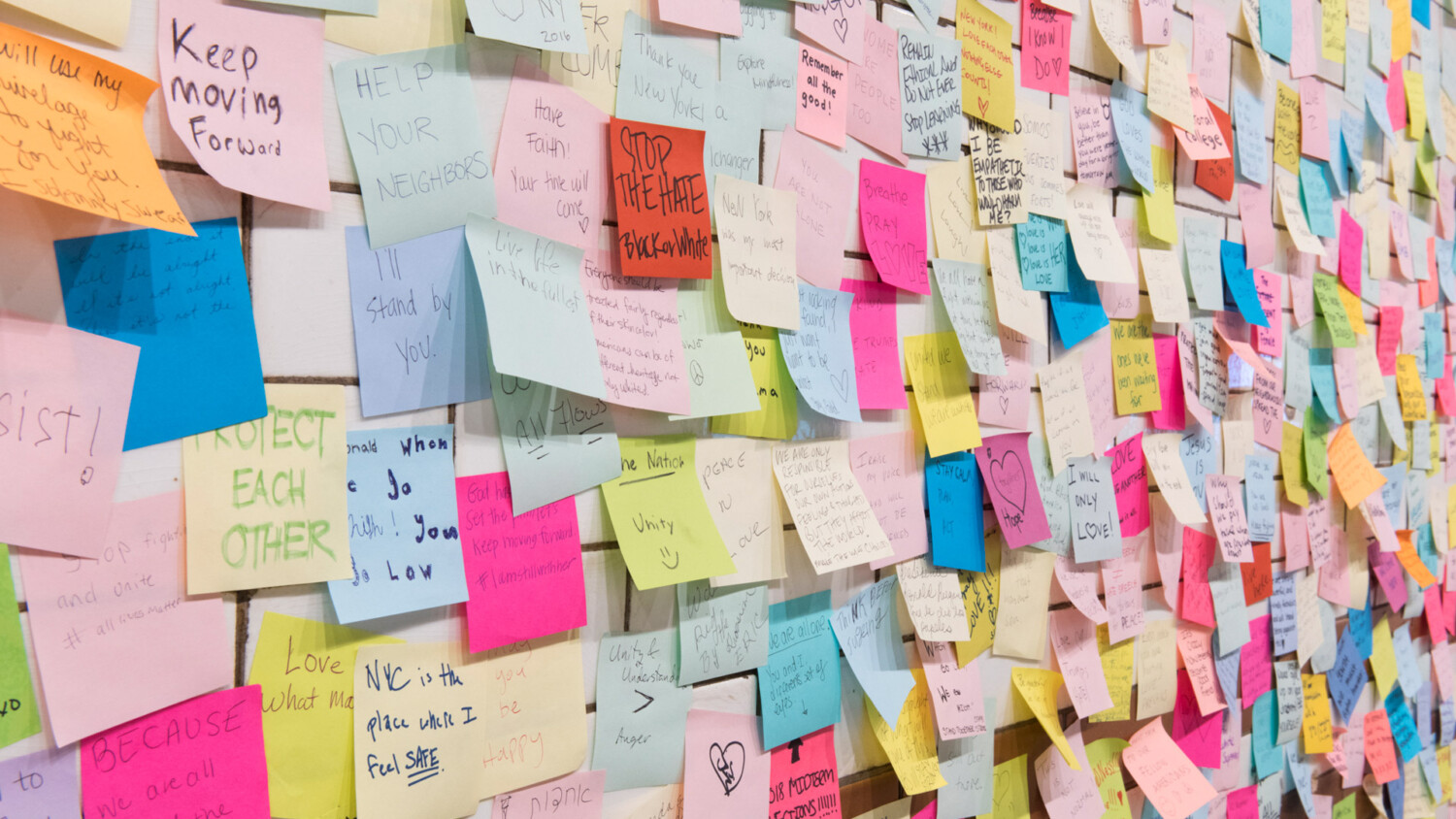 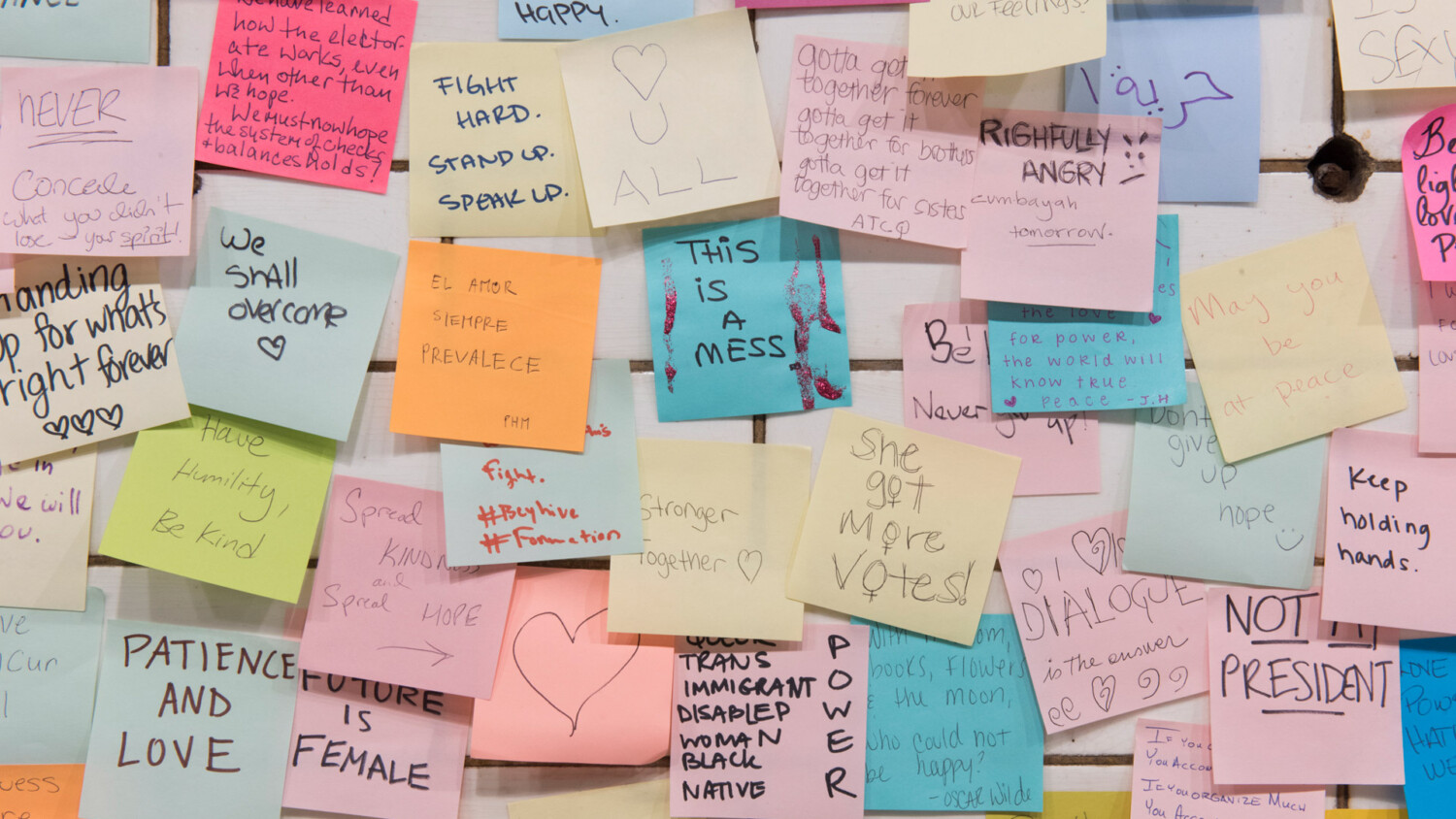 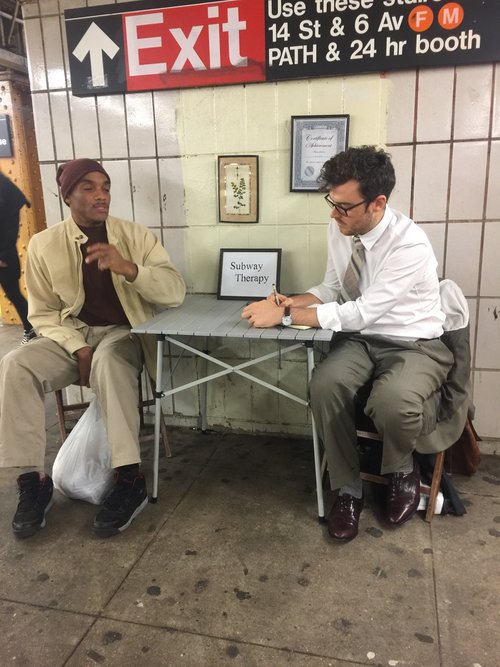 Born and raised in Gilroy, California, Levee worked in the fields of art and education before relocating to Brooklyn in 2015. A book about the project, titled Subway Therapy: Voices of Humanity, will be published by Bloomsbury in October 2017.

Artist Lecture
“I don’t understand, but I will try. We need each other.”
March 7, 2017
A lecture featuring Levee will be held on March 7, 2017 in the University Commons Great Room beginning at 6:30 PM with a reception to follow. Both events are free and open to the public.