Arcadia Exhibitions is pleased to present “Tamsen Wojtanowski: Between My Finite Eyes” in the Harrison Gallery from April 8 through September 2, 2019. 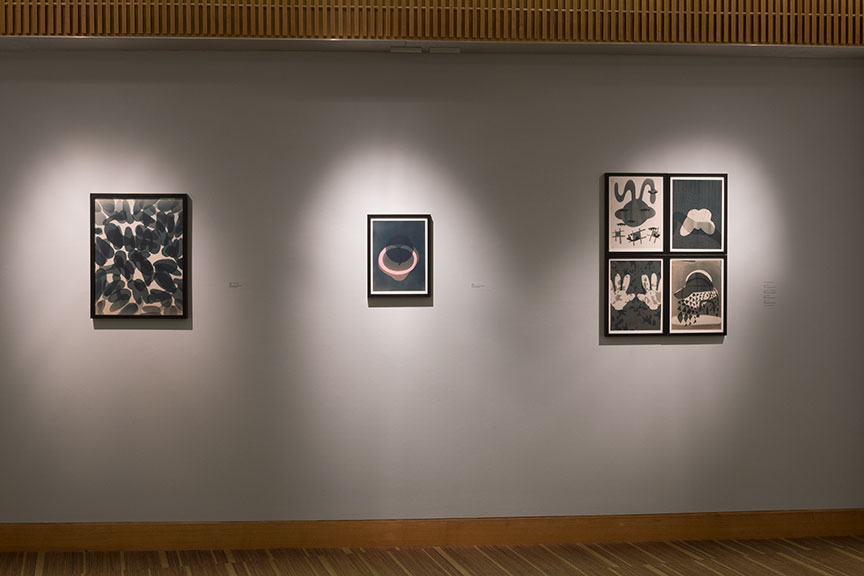 The 29 cyanotype prints on display in the Harrison Gallery represent an ongoing series begun by Wojtanowski in 2016 responding to the current political and cultural climate and its impact on her everyday life. (Previous iterations of this exhibition were presented at the spring 2018 Fleisher Wind Challenge as well as at the Silver Eye Center for Photography, Pittsburgh, Pennsylvania.)

These works are distinctive for their monochrome shapes, ranging in legibility from instantly recognizable to intriguingly amorphous. These forms are produced by applying light-sensitive emulsion to watercolor paper and exposing it to light through hand-cut stencils from the artist’s original drawings that she refers to as “negatives” (in keeping with her background as a photographer). This process may be repeated several times on the same print using different negatives, achieving a layered effect which serves to highlight or obscure certain visual elements as Wojtanowski chooses.

Individual exposures are also manipulated using bleach, coffee, or other solution baths, expanding the artist’s palette from the bright blue tints associated with this cameraless photographic process into rich tones of brown, gray, and pink.

The resulting superimpositions generated by this time-intensive technique serve a number of metaphorical functions. The convergence of information in the prints share characteristics with the contemporary online/social media experience. Not coincidentally, Wojtanowski frequently includes text in her works, produced using the same hand-cut stencil technique as her other forms. Lines presented in bold, playful, capitals letters such as “Yes do it 1000%” in One Thousand Percent (2016) or “Don’t be taken in by small signs of normality” from Not Normal (2016), initially read like online affirmations or memes. However, given the context of Wojtanowksi’s other imagery, they feel stripped of any intention to support or uplift, becoming more ominous or absurd. 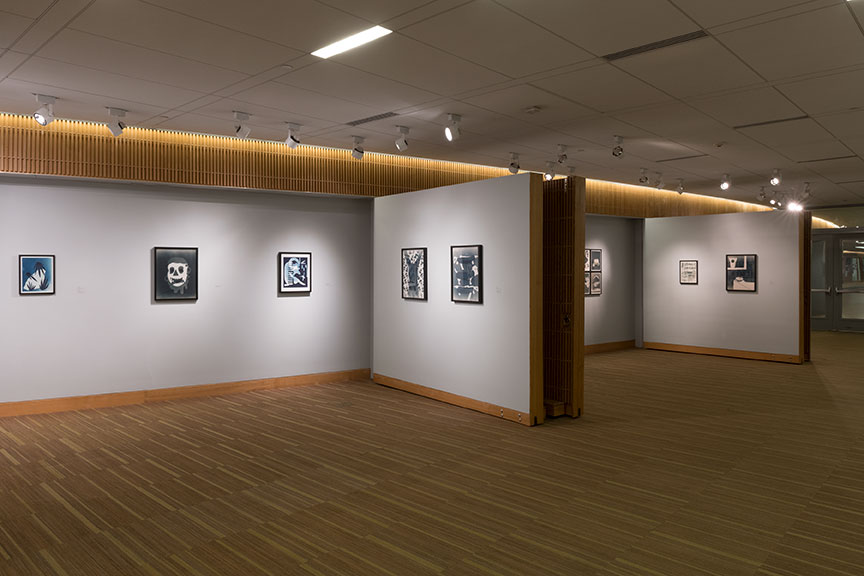 Wojtanowski’s layered imagery also serves as a space where the empirical world merges with her own perceptions. The more discernible forms within Wojtanowski’s prints depict rifles, ash trays, IUDs, duvets, combs, keys, bullets, coffee mugs, etc. Disembodied portions of the human figure abound. In examples such as Tig Bitties (2016), in which a large, dark hand hovers over three sets of floating, disembodied breasts, or Nuclear Football (2016), where two “cartoon glove” hands reach simultaneously for identical buttons, the tone is decidedly political. In Striped Sheet, New Bedspread (2016), in which disembodied pelvises overlap, or in I Love Someone with Armpits (2018)—with its figure, arms outstretched, standing in a storm of leaves — the context is personal, even playful.

Though particular prints within the series may emphasize political or personal concerns, more often than not the two tend to cohabitate –  and that is precisely Wojtanowski’s point. Whether considering individual prints or the body of work as a whole, she proposes that we do not experience joy or anxiety over political or personal events in such binary terms. For Wojtanowski, as for many, the political has become personal, and her response in these works is to make the personal public.

Tamsen Wojtanoski is an artist living and working in Philadelphia, Pennsylvania. Her work has been shown nationally in New York, Los Angeles, Miami, Nashville, Seattle, Philadelphia, and Portland, and was chosen for Fotofilmic’s 2018 Travelling Exhibition, juried by Roger Ballen, Larry Fink, and Raymond Meeks. Wojtanowski was selected as the Keystone Award Winner as part of the Fellowship 18 annual juried exhibition at the Silver Eye Center for Photography in Pittsburgh, Pennsylvania juried by Lucy Gallun, Assistant Curator, Department of Photography, Museum of Modern Art. She was also selected to participate in the 40th iteration of the Fleisher Wind Challenge exhibition in the spring of 2018.

Wojtanowski’s work has been featured in publications such as Aint Bad, Selfish, Dum Dum, and Diffusion Magazine. She is a founding member of the artist-run exhibition space Napoleon, started in 2011. She is an instructor in photography at the Tyler School of Art/Temple University as well as at Arcadia University.

The exhibition is curated by Matthew Borgen, and was made possible by a donation from Theresa and John Rollins. For more information about these exhibitions, please contact Arcadia Exhibitions at (215) ­517-­2131 or borgenm@arcadia.edu.

PANEL DISCUSSION
April 18, 2019
A panel discussion featuring Wojtanowski and printmaker Jennifer Manzella will be held in the University Commons Great Room beginning at 6:30 PM with a reception to follow. Both events are free and open to the public.