Arcadia University Art Gallery is pleased to present “Threading the Maze,” an exhibition featuring works by Lee Krasner, Elizabeth Murray, Faith Ringgold and Miriam Schapiro. On view from August 27 through October 18, 2015, the show features paintings, works on paper, fabric collages and quilts by artists whose innovative use of abstraction and figuration, personal narrative, as well as the decorative and domestic, offered a set of fresh alternatives to mid-century Modernism.

“Threading the Maze” is the second in a series of exhibitions celebrating the 30th anniversary of the gallery’s relocation from its initial site in the campus library, then called the Fuller Gallery, to the Benton Spruance Art Center. The show references solo exhibitions for Krasner, Murray, Ringgold and Schapiro held in this original exhibition space. The first show in the series, “Coordinates,” presented this past spring, included works pertaining to solo exhibitions at the Fuller Gallery by Arakawa, Alice Aycock, Robert Morris, Barry Le Va, and Dorothea Rockburne held between 1977 and 1984.

The title of the current exhibition—an allusion to the Greek myth of Ariadne and the thread she used to escape the Minotaur in the labyrinth—suggests the means of arriving at a solution through an exhaustive application of all available routes. The theme was prompted by Lady Gengi’s Maze (1972) by Miriam Schapiro (1923-2015), a large canvas that depicts three quilts rising like magic carpets from a minimalist rendering of a room-like enclosure. Regarded as a transitional work between her abstract and her feminist periods, it forecasts her founding role in the “Pattern and Decoration” movement. The exhibition also includes a smaller canvas entitled Curtains (also 1972), the first work in which Schapiro used cloth as a collage element, a practice that became her signature technique. The vertical strips of eyelet that divide its organdy-covered surface recall Barnet Newman’s iconic “zip” pulled open in an act of unveiling.  Both paintings signal Schapiro’s move away from her hard-edge, geometric works of the 1960s, and what scholar Thalia Couma-Peterson described as a confrontation with Schapiro’s own “masculinist artistic training.” 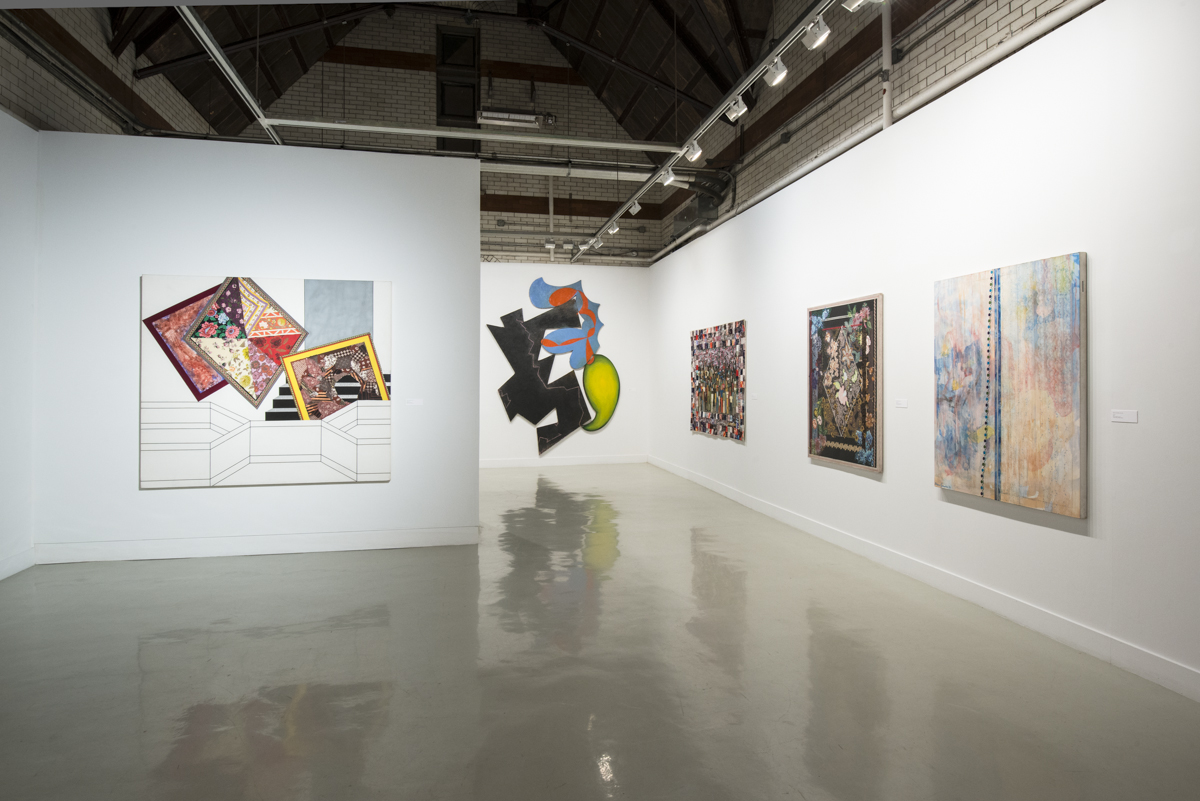 Inspired by a similar reaction to the western canon, Faith Ringgold’s canvas from 1966 and two quilts from the 1980s demonstrate an analogous transition from painting to works made with fabric. Ringgold’s evolution as an artist was tempered by the developments of the Civil Rights era and the license to explore the personal and autobiographical that gained momentum with the women’s movement in the 1970s. Her painting Woman Looking in a Mirror, part of her American People Series (1963-67), uses color in a nuanced way to transform a moment of female vanity (a staple of Western portraiture) into a question about race and identity.

Less subtle was Ringgold’s adaption of the form of the quilt, which she modeled after Tibetan Buddhist thangkas, painted or brocaded cloth that could be rolled up and easily transported. The two examples included in the show—one of which offers an intimate story of a dreamlike sexual encounter in Paris and the other a celebration of urban integration—demonstrate the scope of Ringgold’s personal and social concerns. 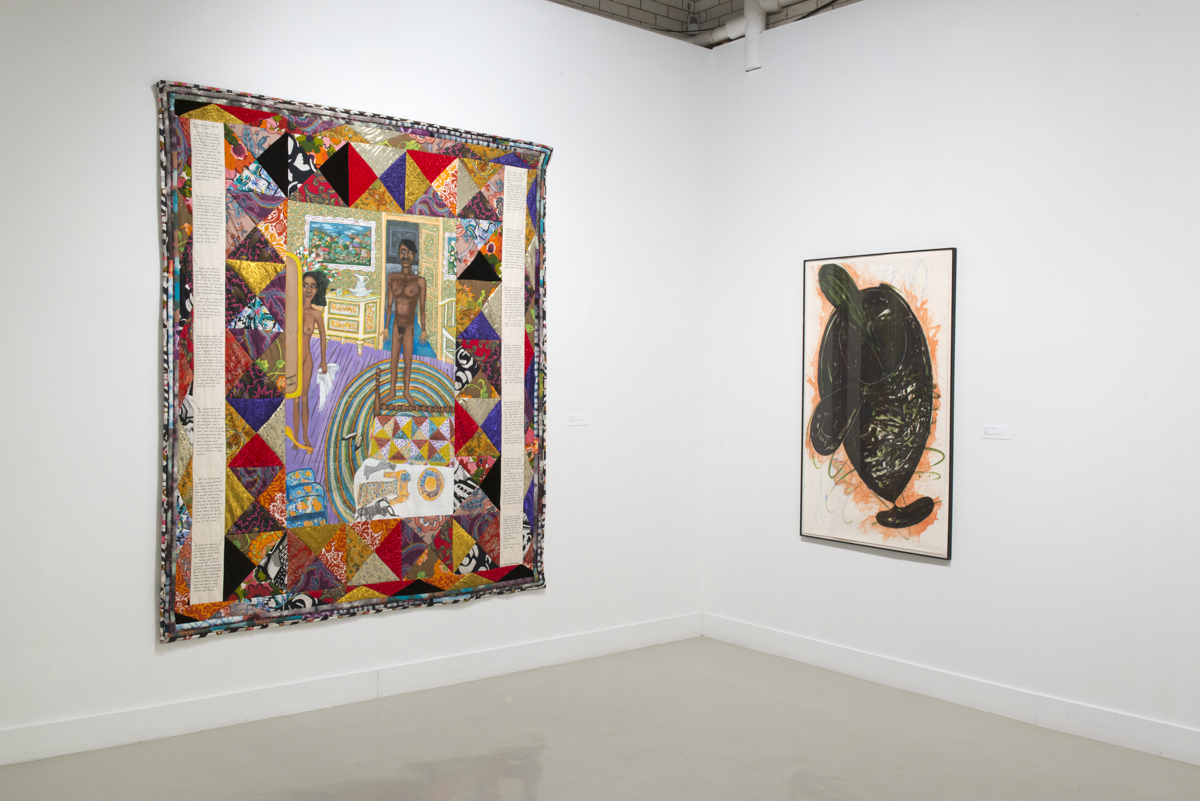 The work of Lee Krasner (1908-1984) embodies the canon from which Schapiro and Ringgold sought liberation. She is represented in the exhibition by two very different applications of the “allover” technique, which Krasner helped to devise in the 1940s. Based on the grid, this approach to composition became an essential component in the work of her male peers, including her husband, Jackson Pollock, whom she married in 1945 and survived by nearly three decades.

While maintaining an interest in gesture and abstraction throughout her career, Krasner refused to adopt a singular, recognizable style, opting instead, to embrace change by altering the mood and subject matter of her work as well as the many surfaces, mediums, and compositions she employed. Highly critical of her own efforts, she repeatedly revised and destroyed a large percentage of her drawings and canvases, scraps of which she used to make her “collage paintings”. As a result, Krasner managed to rewrite the grammar of Abstract Expressionism and avoid the traps of repetition that befell others working in this mode. The two works included in the exhibition reflect what critic Barbara Rose described as Krasner’s shifts between “open form and hard-edge shape, bright color and monochrome palette.” Her gouache on paper, Hieroglyphs No. 7 (1969), a porous array of drips and ciphers, evokes an organic script, whereas Sundial (1972), conveys a keen sense of structure. This large, nearly square painting, which was included in Krasner’s 1974 exhibition at Beaver College, is comprised of red, orange, and brown arcs incised by transverse lines. Suggesting shadows, a compass, or the hands of a clock, it is the bold design of this work that we register most. 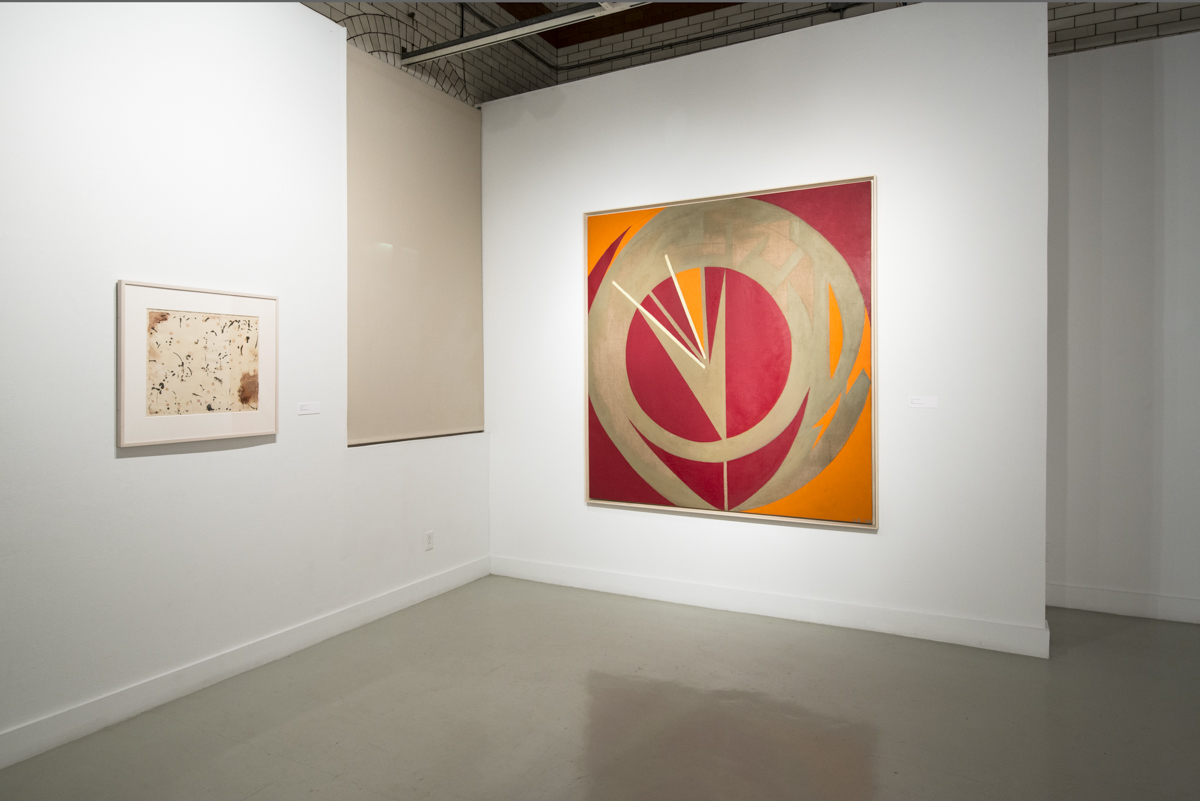 Sundial points toward the dynamic interplay between abstraction and figuration, bulbous curves and jagged angles, positive and negative spaces that distinguish Elizabeth Murray’s Sentimental Education (1982), an emblematic example of her pioneering shaped canvases first introduced in the late 1970s. Building on the development of this format by artists such as Kenneth Noland, Ellsworth Kelly, and Frank Stella in the early 1960s, Murray (1940-2007) can be credited with exploding painting’s rectilinear frame and illusionistic depiction of space with a raucous expressionism antithetical to the rational geometry applied her predecessors in this idiom. Murray’s shaped canvases not only explore tensions between color and contour, image and object, but also invest these oppositions with personal and emotional content. A second work by Murray, Untitled (Black Cup), a color lithograph with handcoloring from 1984, was included in Murray’s exhibition at Beaver College the same year.  Analogous to other biomorphic forms that populate her work from the 1970s, the image of the cup and its tongue of splashing liquid can also be found in many of Murray’s later paintings.

“Threading the Maze” is presented in tandem with “The Richard E. Fuller Art Gallery (1962-85): A History of Arcadia University’s First Exhibition Space,” an exhibition on view in the Great Room Lobby of the Commons through October 11, 2015. Curated by Matthew Borgen, with assistance from Megan D’Avella (Class of 2016), the show tracks the evolution of the Fuller Gallery from a space that exhibited student and faculty work to a venue that presented the first exhibitions in the Philadelphia area for some of the most significant and influential artists of the era. Instrumental to this development were the efforts of Judith K. Brodsky, who taught art at Beaver College from 1972 to 1978 and authored the gallery’s first successful proposals to the National Endowment for the Arts and the Pennsylvania State Council on the Arts that helped to fund these shows. Brodsky, along with Department Chair Jack Davis, organized the exhibitions for Krasner, Ringgold, and Schapiro referenced in “Threading the Maze.”

In conjunction with “Threading the Maze” and “The Richard E. Fuller Art Gallery (1962-85): A History of Arcadia University’s First Exhibition Space,” the gallery has scheduled a lecture by Judith Brodsky on September 30, 2015 at 6:30 p.m. in the Great Room of the Commons.

Brodsky is a Distinguished Professor Emerita in the Department of Visual Arts at Rutgers and Founding Director of the Rutgers Center for Innovative Print and Paper (renamed the Brodsky Center for Innovative Editions in her honor in September 2006). She is also a founding director of the Rutgers University Institute for Women and Art and currently Chair of the Board of the New York Foundation for the Arts.

Brodsky’s lecture at Arcadia will include reflections on her work at the gallery and how the artists she brought to campus influenced the era. Her lecture will be followed by a reception. Both are free and open to the public.