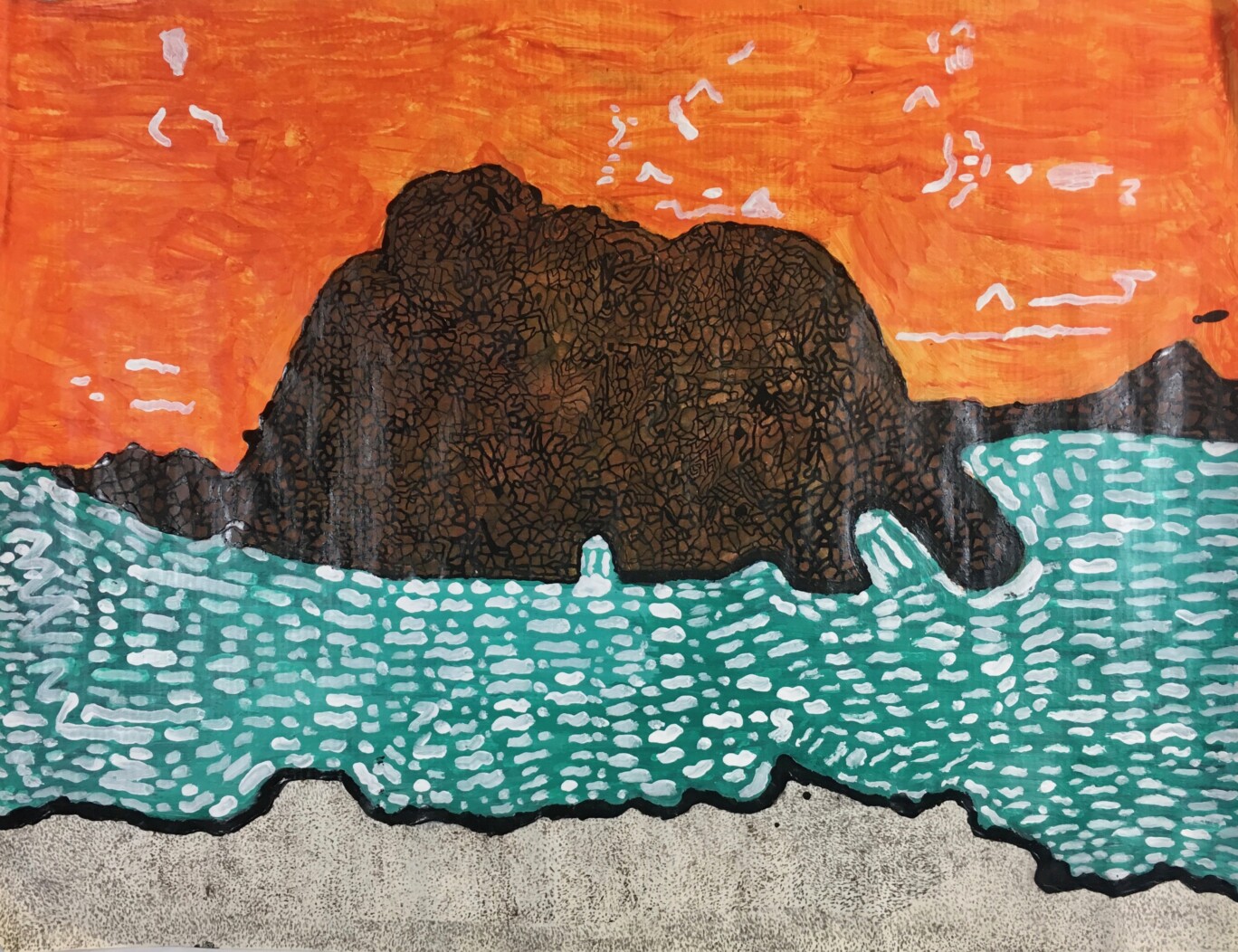 Arcadia Exhibitions, in collaboration with Center for Creative Works, is pleased to present “Owen Ahearn-Browning, Timothy O’Donovan and David Schmuckler: Character Studies” from October 18, 2022 to February 5, 2023 in the Rosedale Gallery, University Commons. 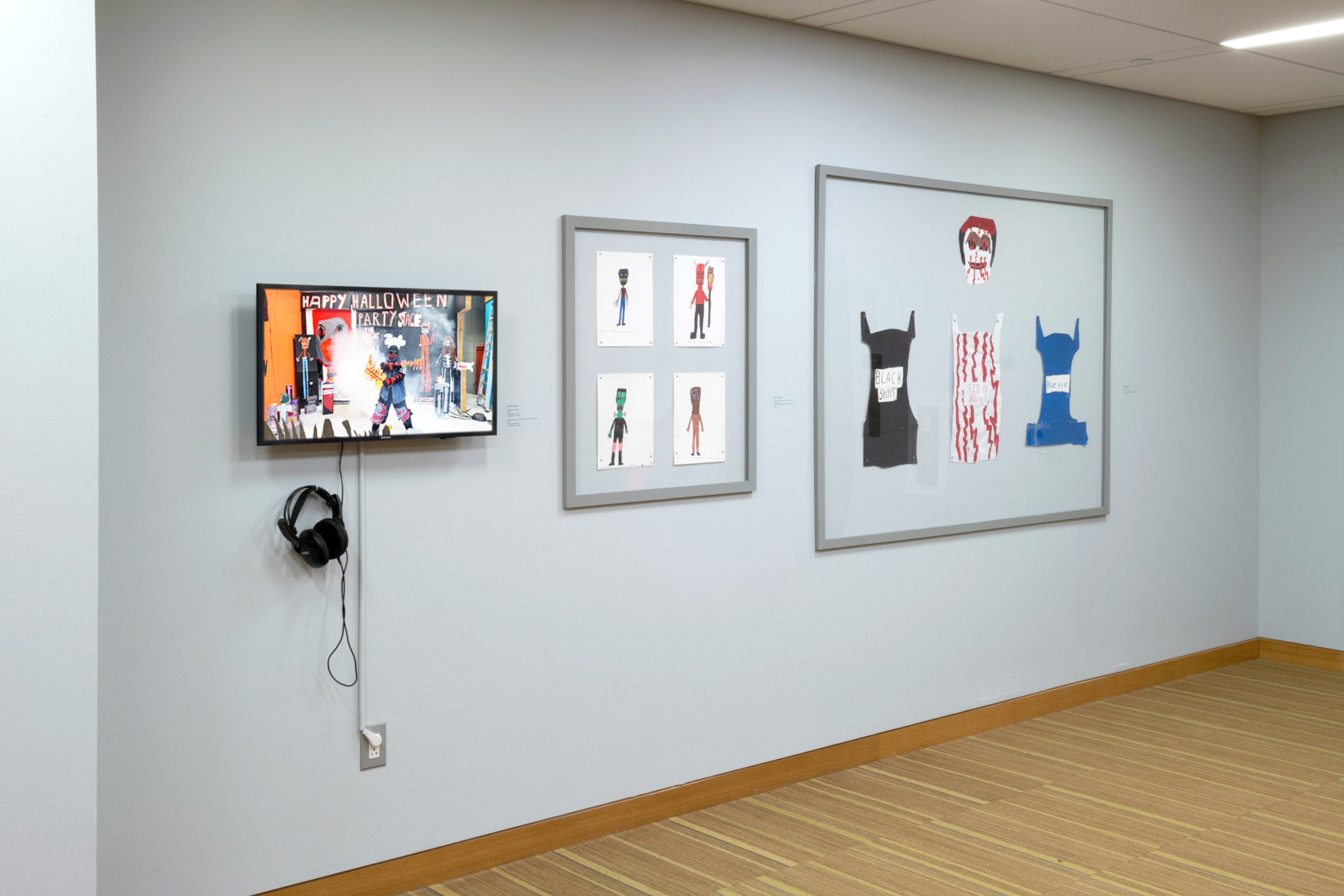 The theme of personal narrative unites the work of these three artists, each of whom explore elements of their individual experience through some kind of storytelling. In his spoken-word performances, Owen Ahearn-Browning recites prose poems told through various alter egos – “I Mr. Angry Man Owen,” “I serious and curious kid Owen,” and “I Dwight K Schrute from The Office,” among others – that trace an assortment of moments, lived and experienced through film and television. A true citizen of the world, Timothy O’Donovan has resided in Wales, South Africa, and all over the United States. His art practice traces his travels through landscape painting and extensive writings, which he reads aloud in performances set to music. David Schmuckler’s work is singularly concerned with the aesthetic of horror films which inspire elaborate installations incorporating painting and sculpture. He activates these spaces by physically entering them, fully-costumed as specific characters, and exploring these invented personas through rhythmic, repetitive choreographies.

Center for Creative Works (CCW) is a studio for adults with developmental disabilities. With two locations – in South Kensington, Philadelphia and Wynnewood, Pennsylvania – CCW works with over one hundred artists on creative and professional development in the arts. Participants learn skills in drawing and painting, as well as printmaking, ceramics, woodworking, music, sculpture, and textiles. A staff of mentor artists teaches professional materials and techniques, with the goal of developing participants as artists, artisans, and designers. The organization fosters individual expression and skill development, promoting its artists’ work through public exhibitions, art fairs, and other events in the community. CCW is committed to realizing the potential for everyone to contribute in truly meaningful and productive ways, and to support its artists in building their cultural identity as members of their community. 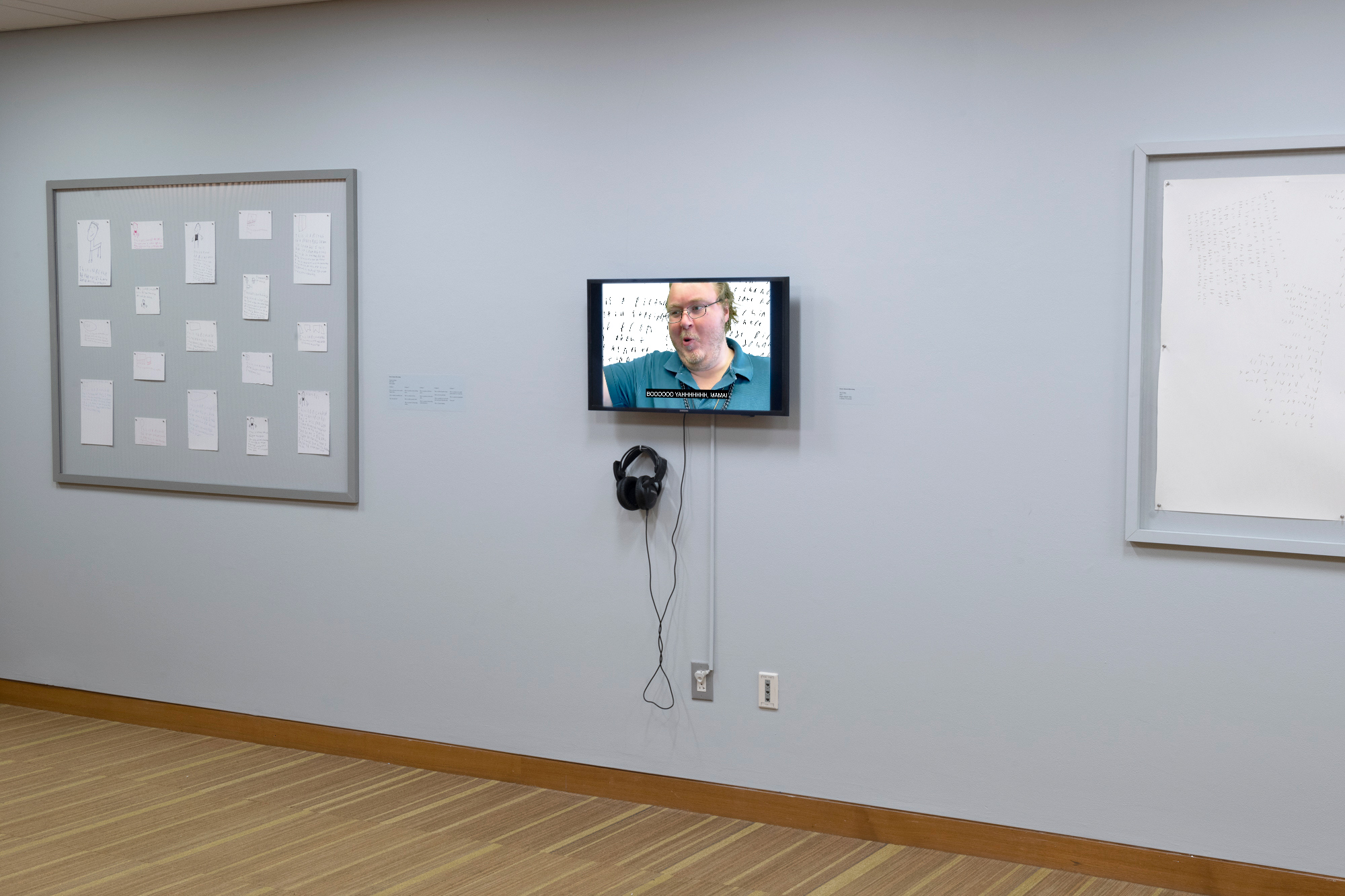 CCW grew from the Lower Merion Vocational Training Center (LMVTC), which was founded by Resources for Human Development in 1972. LMVTC followed a sheltered workshop model, in which participants do traditional vocational contract work, such as stuffing envelopes and shredding paper.  Transforming into an arts program in 2010, CCW became a place for participants to explore creative ways to earn money, express themselves, engage with and contribute to their communities, and build artistic skills. Through exhibiting and selling artwork, working on contract design jobs, and developing products, artists are able to attain ownership over the work that they engage in, while developing sophisticated aesthetic sensibilities. 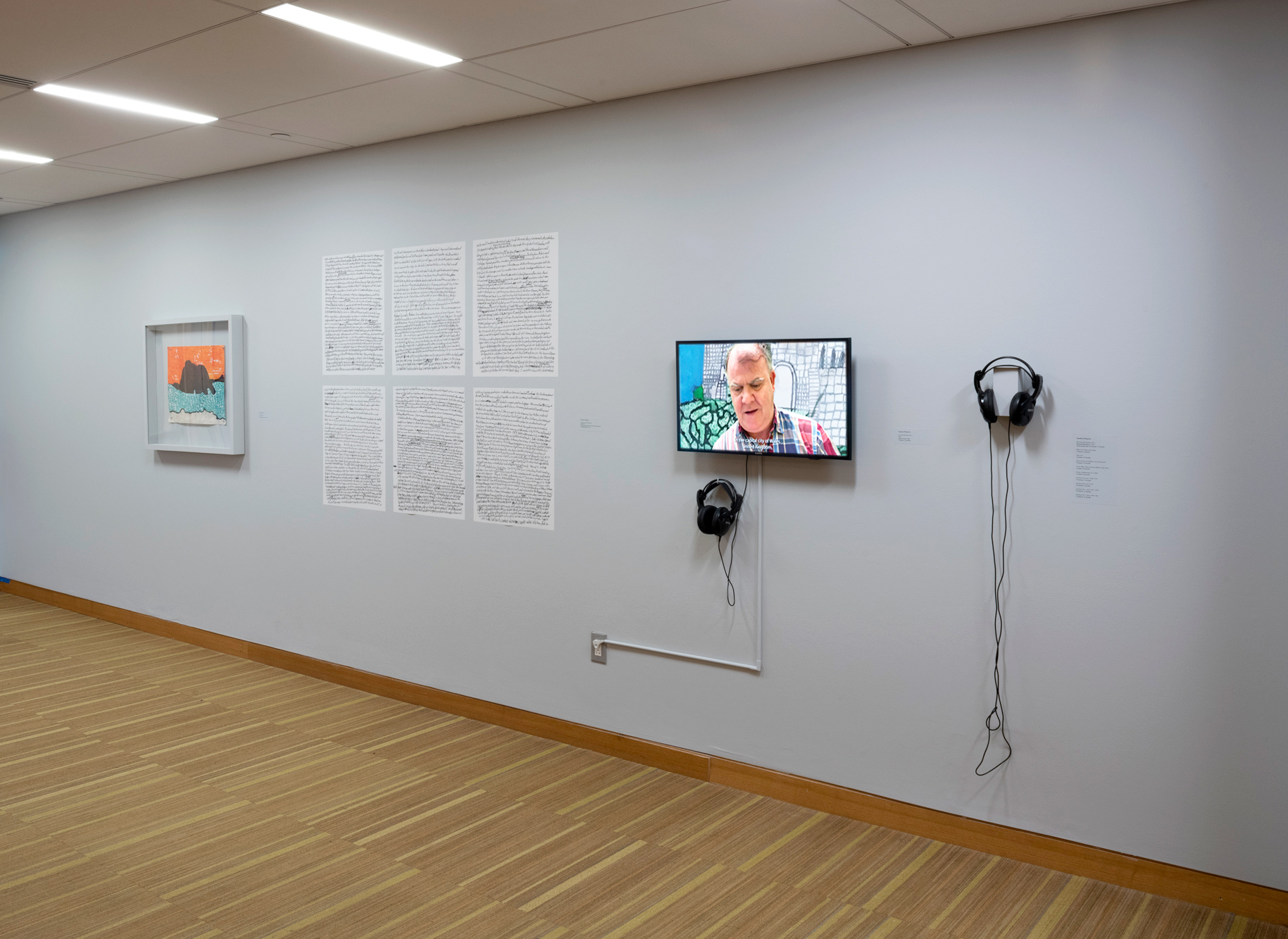 David Schmuckler (b. 1989) has a passion for horror that runs deep through everything he makes. Schmuckler began his career as an artist in 2014 at Center for Creative Works as a painter and illustrator. Creating singular compositions of masks and figures in costumes based on Google-image search-sourced imagery of Halloween phantasmagoria, his work deconstructs representations of horror in popular culture.

Schmuckler recently expanded his oeuvre to include sculpture, video, sound, installation, and performance. His performance Vampire Evil Devil Demon Monster (2021), the culmination of the past two years of Schmuckler’s practice, is a multi-media exploration of a demonic alter ego. “I AM VAMPIRE EVIL DEVIL DEMON MONSTER,” Schmuckler tells his audience. Wearing a painted and hand-embroidered costume, Schmuckler transforms himself using his voice and found materials to create the sounds of thunder, rain, fire, screaming, devil laughter, demon growls, satanic voices, knives being sharpened, and lightning. To render the aural landscape of a haunted house inhabited by demons, he includes claws that scratch, doors that creak, and echoes that roar. Nodding to his favorite horror movies, which include mass-media icons of the genre such as Michael Myers and Jason Voorhees, Schmuckler transports us to a fantastic world of his own making.

I like the idea of seeing nature by itself in its own form.  I feel very comfortable with nature when I take hikes and walks wherever I am visiting or residing. I’ve been to a place that’s very similar to Venice, Italy, when I went on vacation with my mom in Las Vegas. Cardiff, Wales is where I was born. I later resided in South Africa, after I had accommodations in New Zealand. I went from South Africa to the United States.

I feel more in control of my life and my emotions when I make a piece of artwork. If there is too much tension, I paint and draw while listening to natural music, sounds of the ocean, and Enya, and Vangelis. I feel less stressed. I have a pretty difficult time processing things, but gradually it comes back to memories of thought about what I would like to do with my artwork. I use a lot of different mediums to contain my pieces of artwork

I am a learning-disabled individual and have been since birth. I’ve been independent since age 14, and have been a self advocate for 17 years. I have been coming to the Center for Creative Works for eleven years, and have lived independently for fourteen years. – T.O.

Timothy O’Donovan (b. 1964) has traveled extensively in his lifetime and references landscapes and landmarks that he has seen from all over the world in his artwork. From the castles of Wales to the beaches of South Africa, his work captures diverse settings with meticulous detail. Primarily working with pen and ink, pencil, and watercolor, he has developed a process that is simultaneously focused and improvisational, combining tight marks with emotionally charged washes of color. O’Donovan’s artworks have been exhibited at Haverford College, Neumann University, Bryn Mawr Rehab, ArtYard, and Philadelphia’s City Hall, among other venues. Recently, O’Donovan has pursued spoken word audio work and is in the process of translating his written life story into a series of recorded prose poems set to music. He has performed at The  Free Library of Philadelphia and The Rotunda in West Philadelphia.

I love doing art about different places like that place called Cynwyd Elementary School that is near the middle school I went to for three years but the elementary school I was at for only one year only for a little while.

And my artwork is also on the fact that I have always loved being a free and energized man.

I think it’s about time I enjoyed swimming in the Lower Merion High School Pool when the Chestnut Hill College Pool is gone and another thing I do art on is the different foods I still eat sometimes like chocolates or pizza I mean any of that and I also think that it’s about time I wrote about basketball at Baldwin and the Upper Dublin Swimming Place on Saturday.

I think I need to do more artwork on different old times so any way that is all so anyway thank you again for all your time and okay both ciao and bye. – O.A.-B.

With a passion for storytelling, Owen Ahearn-Browning (b. 1992) creates dynamic spoken-word pieces that are created to be read aloud. Delivered in a distinctive style that is half song/half shout with a clear syncopated rhythm, sometimes accompanied by instrumentation, Ahearn-Browning’s writings trace meandering stories that flow easily from describing his experiences to fiction. His narrative thread spans time and space, pulling content from television and his own childhood with equally powerful immediacy and sense of ownership. Shorter writings on note cards are paired with cryptic, humorous drawings that articulate deceptively simple statements of objective truths, which are both ironic and deeply sincere.

Ahearn-Browning grew up in Lower Merion and still lives in the Ardmore area. He has created several publications with Center for Creative Works, including Book About Furniture and full-length albums with CCW’s Pop! Pop! Pop! Records, including Owen Sings Like Michael Jackson. His work has been exhibited at The Brodsky Gallery in the University of Pennsylvania’s Kelly Writers House and The Woodmere Art Museum, among other spaces. In 2022 he performed with The Moth in Havertown.

Please return to this page for information about upcoming events and performances.