The Arcadia University Art Gallery is pleased to present “Coordinates: Drawings and Prints Marking Five Exhibitions at Beaver College (1977-84)”. This show, which celebrates the 30th anniversary of the relocation of the Richard E. Fuller Gallery to the Benton Spruance Art Center, includes works by Arakawa, Alice Aycock, Barry Le Va, Robert Morris, and Dorothea Rockburne, all of whom exhibited at Beaver College during the 70s and 80s. 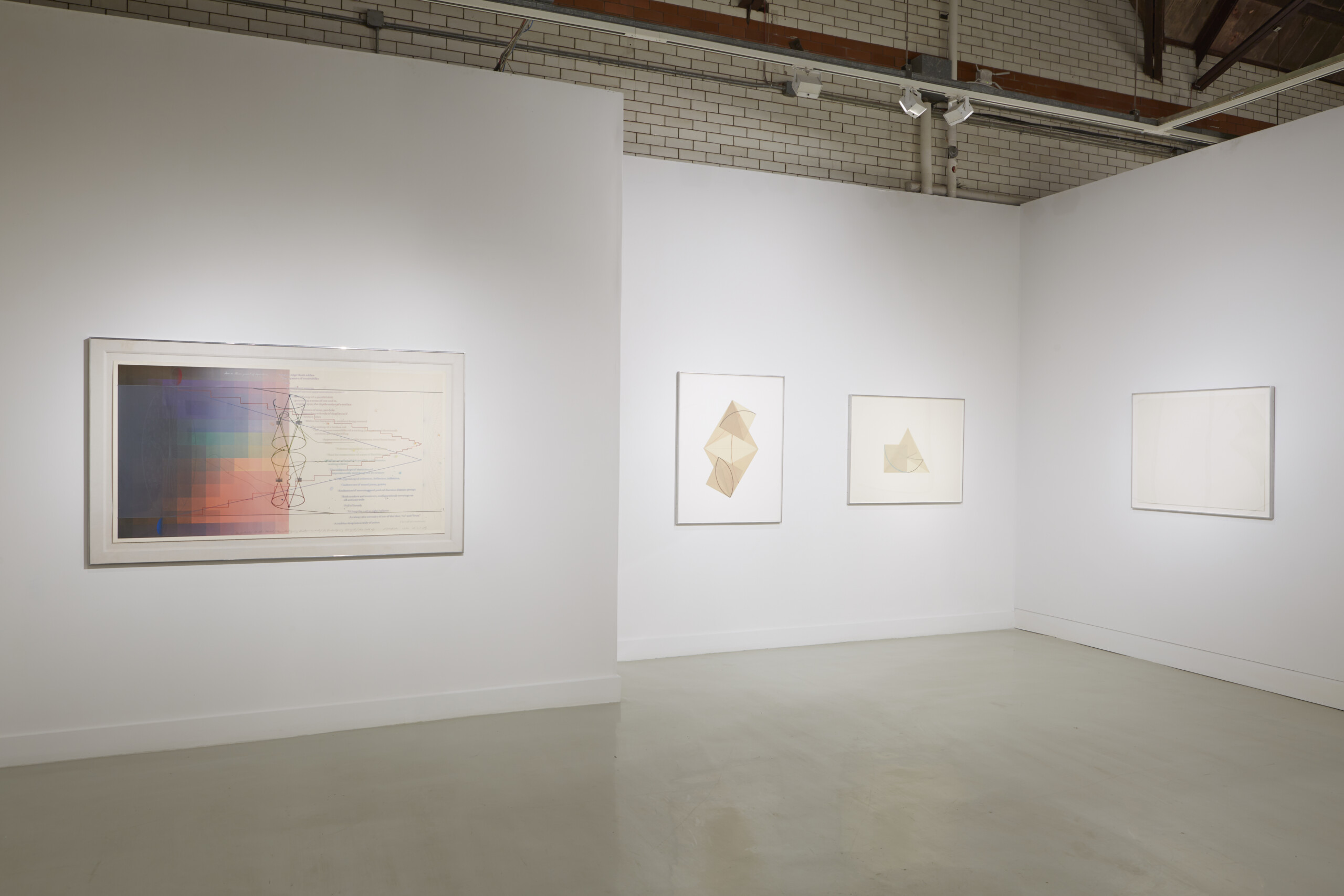 The car accident of March 25, 1985 (documented in detail by the exhibition “The Richard E. Fuller Gallery (1962-85): A History of Arcadia University’s First Exhibition Space”, now on display in the Great Room Lobby,) harmed no one but seriously damaged the Richard E. Fuller Gallery days before the opening of its next scheduled exhibition “Image As Metaphor: Works in Metal and Mixed Media” featured works by Harriet Berman, Bruce Metcalf, and Fred J. Woell. Records indicate that the show was scheduled to open on March 29, four days after the accident.

The only viable alternative was to clear out the painting studio in the Benton Spruance Art Center and hang the upcoming exhibition there. This improvised solution revealed many benefits of the new location, not the least of which was the proximity to the art studios and classrooms in Spruance and Murphy Hall. In the fall of 1985 the college decided to make the move permanent. The new space became known as the “Beaver College Art Gallery,” a name the venue kept until the school became Arcadia University in 2001. Perhaps more significantly, however, the role of gallery director went from being a part-time to a full-time position.

“Coordinates” represents an attempt to honor the programming of the Fuller Gallery and its mission—as stated by Zina Davis, the gallery’s first full-time director—to “offer the public a unique opportunity to experience some of the most challenging art of our time in an intimate environment.”

Reviewing the full roster of exhibitions presented in the Fuller Gallery between 1962 and 1985, solo shows by Arakawa, Alice Aycock, Barry Le Va, Robert Morris, and Dorothea Rockburne suggested a continuity of curatorial vision that could be articulated by a group presentation in the gallery’s current space. Each of these exhibitions demonstrates a preoccupation with process and materials that runs parallel to an investment in the generative capacity of systems and documentation prevalent at the time. Questions about the relationship between mind and body circulate throughout.

All five exhibitions, along with accompanying lectures by the artists, were supported with funding from the National Endowment for the Arts. Brief descriptions of each show, listed in chronological order, follow below:

This exhibition featured two series of works, seven examples of Indication of Installation (all dated 1973) and five variations of Drawing Which Makes Itself(1972), one of which is included in “Coordinates.” Each of these pieces is generated by precise folds that invite the viewer to envision earlier states and orientations of the vellum or paper used, asserting both the material as well as the physical act of scoring and creasing. Although grounded in the logic and traditions of classical proportions, her singular approach to drawing has consistently challenged the bounds of this discipline. Rockburne (born 1934) studied “mathematics for artists” with Max Dehn at Black Mountain College in the early 1950s. The ratio of the Golden Mean, along with concepts associated with group theory, topology and non-Euclidean geometry, also inform Rockburne’s work. Vellum Curve, Parallelogram (1978) was included in Rockburne’s celebrated 2013 exhibition at the Museum of Modern Art, New York.

The works in Morris’s exhibition in the Fuller Gallery dated from 1969 to 1973 and offered visitors an overview of a practice that includes contributions to the development of Land art, performance, and installation. Morris (born 1931) is also esteemed for his widely influential theoretical texts, which include “Notes on Sculpture” (1966) and “Some Notes on the Phenomenology of Making” (1970). His Fuller Gallery exhibition included examples from the first iteration of his ongoing series of Blind Time drawings, two of which are included in “Coordinates.” 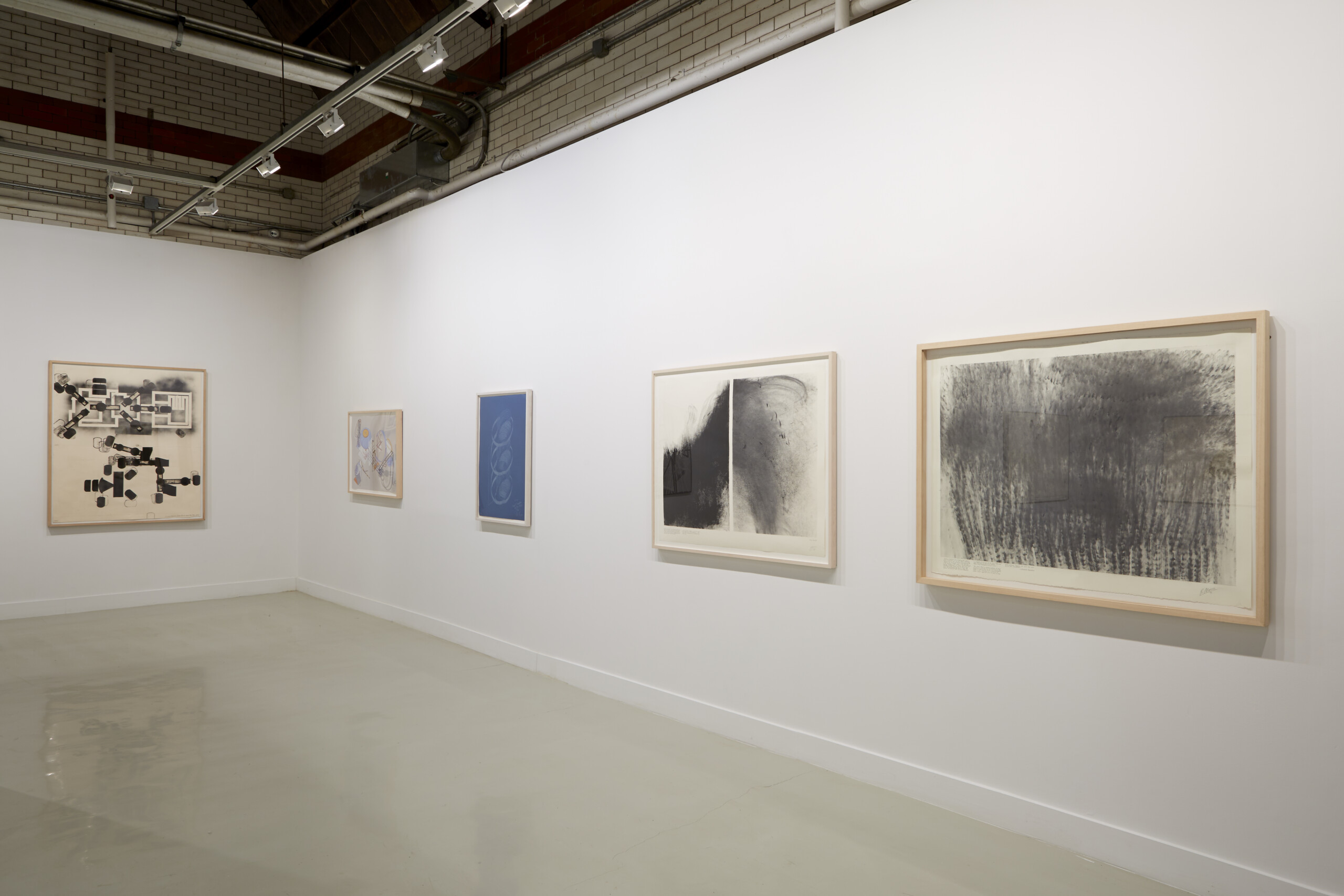 Each of these drawings is executed by the artist with eyes blindfolded and fingers coated with graphite. Texts written in pencil at the bottom of each page articulate the specific task associated with the drawing, including Morris’s attempt to estimate the amount of time required to complete it. The later of the two drawings on view offers an exercise in intention and taste. It describes Morris’s reaction to the drawing in progress upon removing the blindfold. Judging the effort to be “inaccurate but also of no interest,” Morris covers his eyes again and embarks upon a second attempt. The caption below relates this to an excerpt from the writings of the philosopher Donald Davidson regarding rational and irrational preferences, enmeshing the viewer in the process.

Barry Le Va (born 1941) is considered one of the leading figures of post-studio and process art of the late 1960s. His early efforts utilized poppy seeds, small stainless steel ball bearings, white chalk, iron oxide, and pieces of felt, which he dispersed across expanses of gallery floors.

By the early 1980s, his installations developed more heft and were sometimes composed of elements such as large aluminum spheres, fiberboard discs, and wooden planks, all of which he used for his site-specific project for the Fuller Gallery.Intended to impede the viewer’s movement about the space, the individual elements could be read as traces of the artist traversing the given room as the composition developed. 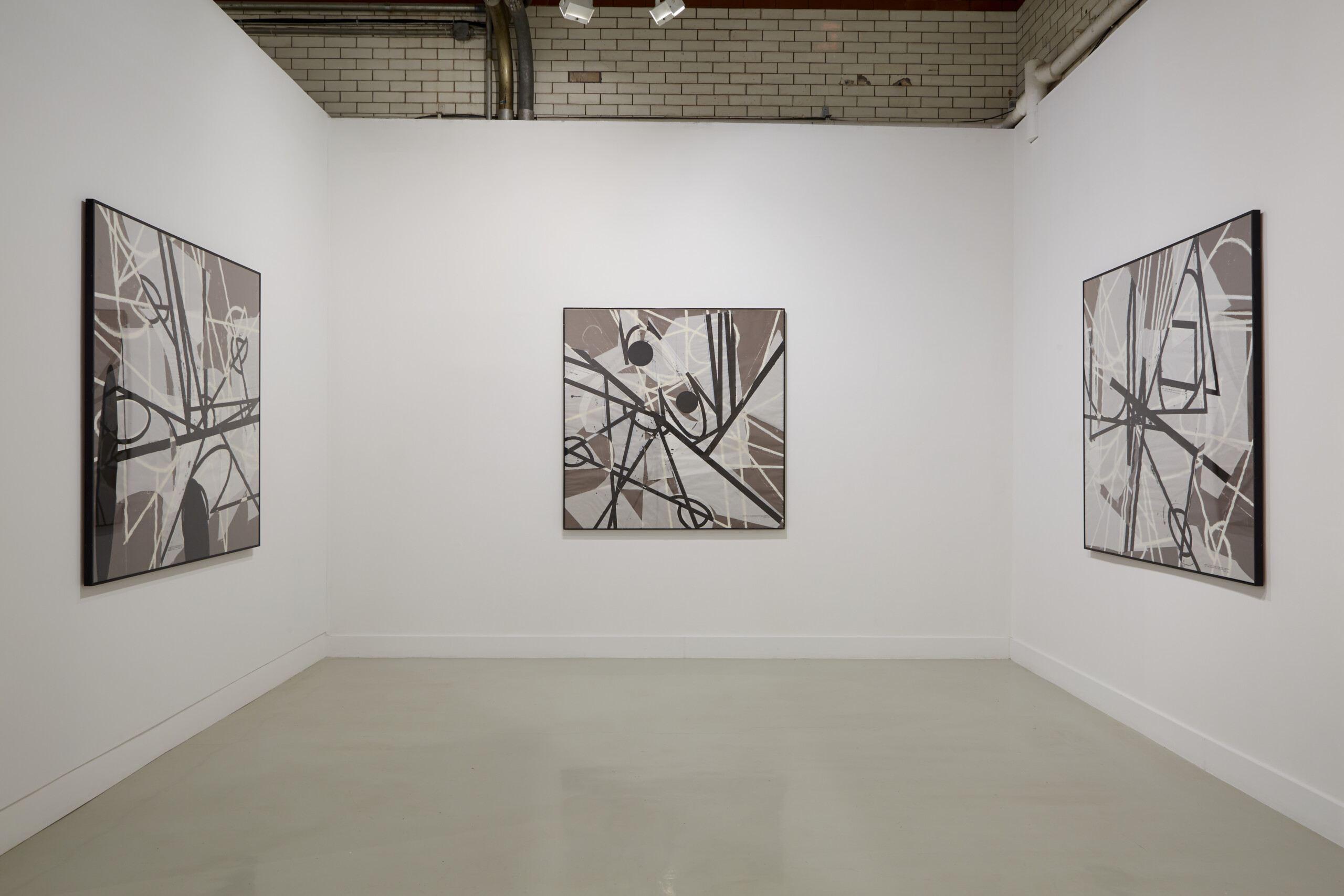 The mental and physical also come together in Le Va’s map-like drawings, four of which are included in “Coordinates.” Careful viewing of these collage-like works, three of which date from 1981 (the year prior to Le Va’s exhibition at the Fuller Gallery) reveals a layered application of painting, marking, tracing, taping, and scoring. As such, they distill the paradoxical dynamics of Le Va’s installations. In 2005, Ingrid Schaffner, chief curator at the Institute of Contemporary Art, Philadelphia, organized “Accumulated Vision,” the definitive survey of Le Va’s work.

Arakawa (1936-2010) was a Japanese-born artist and architect who moved to New York City in 1961. His exhibition at Beaver College, realized in collaboration with his wife, poet Madeline Gins (1941-2014), reflected their ongoing exploration into the process of thought and meaning. The enigmatic works featured in the 1982 exhibition, including Or Detail/Of the Model/Hypostatizing (1980), relate to a larger series of similar panels first presented at the Venice Biennale in 1970 and the book they authored together titled The Mechanism of Meaning. Arakawa and Gins saw the project, published by Harry N. Abrams in 1979, as an open-ended process of research and invention offering what they considered a “rudimentary compendium of the innate functions of the mind” and their attempts to picture them. As they write in the preface: “Meaning might be thought of as the desire to think something—anything—through; the will to make sense out of the ever-present fog of not-quite-knowing; the recognition of nonsense.”  Their collaboration eventually led to a series of architectural projects, both built and proposed, that formed the basis of the 1997 exhibition, “Arakawa + Gins: Reversible Destiny” at the Guggenheim Museum SoHo.

Alice Aycock was born in Harrisburg, Pennsylvania in 1946. Her practice has come to embrace sculpture, architecture, industrial processes and inventions, philosophy, history, and archaeology. Aycock helped establish an innovative, hybrid approach to art making informed by literature and fantasy. The cohesion between her realized sculpture, related drawings, and scale models serve to achieve a form of palpable, if not myth-like authority. Her 1984 exhibition at the Fuller Gallery included drawings detailing her project titled How to Create and Manufacture Ghosts, the subject of one of the works in “Coordinates”. 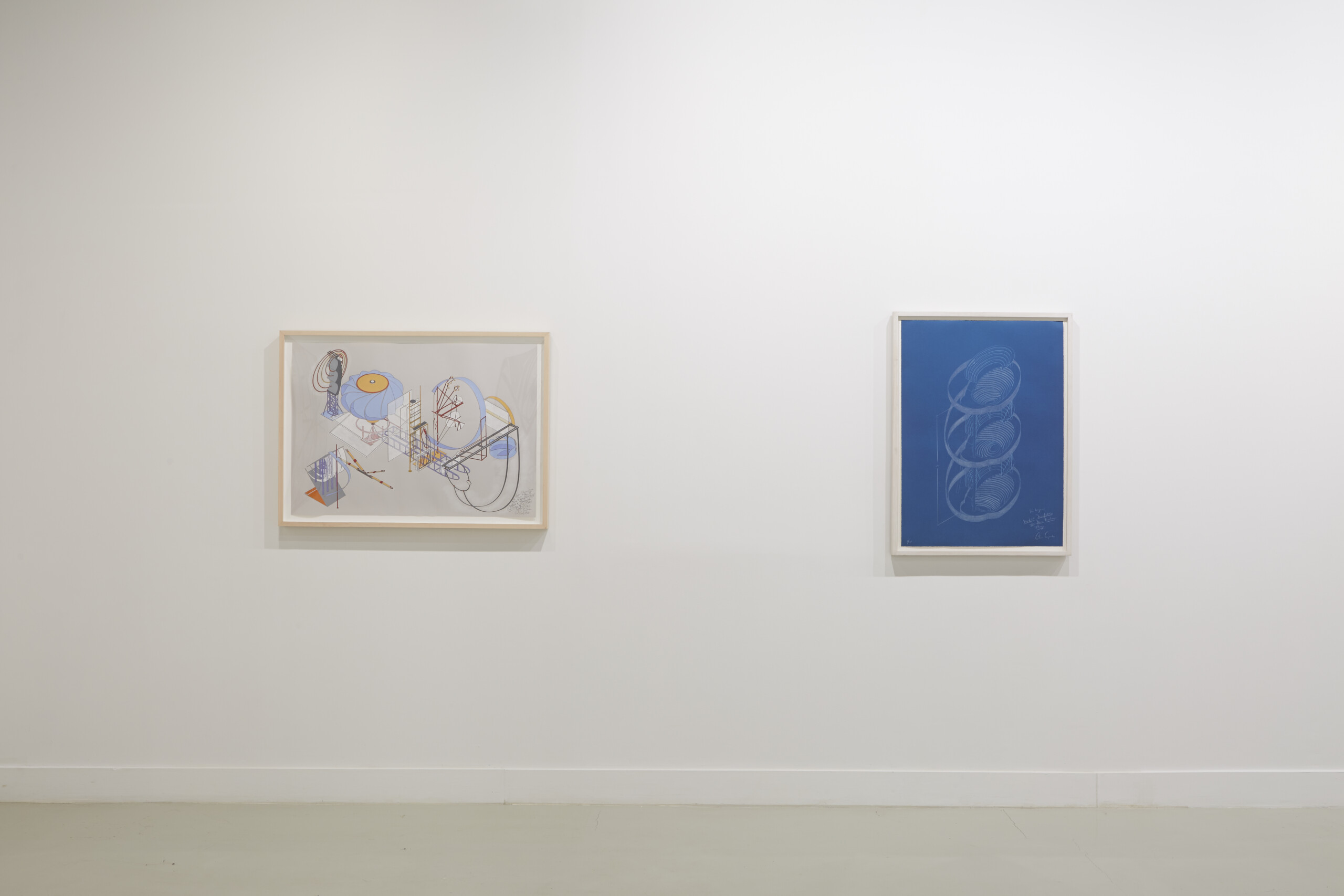 (Left to right) Hoodo (Laura) From the series "How to Catch and Manufacture Ghosts" – Vertical & Horizontal Coss-section of the Ether Wind (1981) (1990-2012) watercolor and ink on paper, and Three Fold Manifestation for Doris Freedman Plaza (1987) silkscreen and etching, photo: Greenhouse Media.

The original large-scale work (1979) was a partly motorized sculpture, constructed of metal, glass, steel, and wood. The second work on view is a drawing for Three-Fold Manifestation, a 32 foot-high tower-like structure made of painted steel that Aycock realized in 1987. (Originally placed at the Doris Freedman Plaza in Central Park, it is now in the permanent collection of the Storm King Art Center, New Windsor, New York.) Aycock states that the work creates “the sensation of disorientation…to some it may be a tower forever spiraling upward with no means of ascension. To others the stacked amphitheaters may bring to mind the theater. Still others may view the piece as an entry to another world.

Zina Davis was working on a degree in painting through Beaver College’s continuing education program when she first became involved with the Richard E. Fuller Gallery. Showing an aptitude for gallery work, her responsibilities expanded steadily until she was assisting with the actual organization of exhibitions. Not long after earning her B.F.A. in 1979, Davis was hired as the part-time director, making her the gallery’s first dedicated staff member.

Before there was an official director, by necessity, the entire faculty had been involved in the shaping of gallery programming. Though Davis was now in a position to control curatorial content more fully, she actively continued to solicit the faculty for ideas regarding themes for shows as well as artists to exhibit.

Until 1983, Davis ran the Fuller Gallery while simultaneously completing her M.F.A. in painting at the University of Pennsylvania. After the car accident that served as the catalyst for the gallery’s move to the Benton Spruance Art Center in 1985, Goldsmith was made full-time director of what became known as the Beaver College Art Gallery.

In 1987 Davis left Beaver College to become the founding director of the Joseloff Gallery, a new 3,500 square-foot space at the University of Hartford in Connecticut. Under her leadership the venue quickly became one of the most distinguished university galleries in its region. She retired as director in 2010 and now lives in New York City, where she continues to work as an independent curator.

4:30 PM, Great Room Lobby: Matthew Borgen, exhibitions coordinator, will lead visitors through “The Richard E. Fuller Art Gallery (1962-85): A History of Arcadia University’s First Exhibition Space”, a show of archival materials.
5:00 PM, Arcadia University Art Gallery: Richard Torchia, gallery director, will discuss “Coordinates” and the five exhibitions presented in the Fuller Gallery that serve as its source.
A reception will follow at the Spruance Art Center. All events are free and open to the public.