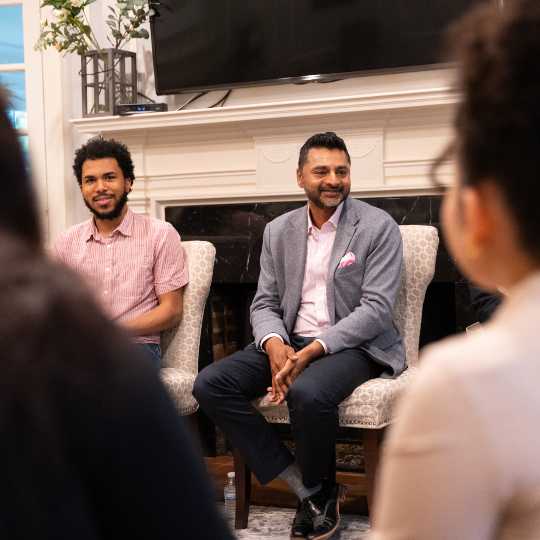 Dr. Ajay Nair, a nationally recognized expert in student affairs issues and an accomplished social justice, race, and ethnicity scholar, was appointed 22nd president of Arcadia University in April 2018 and inaugurated on October 13, 2018. Dr. Nair is the first person of color to be appointed president at Arcadia, and is among the first college or university presidents of Indian-American descent in the United States.

At Arcadia, a national leader in international education, Dr. Nair supports a community of 4,000 undergraduate and graduate students and maintains the University’s strong commitment to liberal arts education. Since assuming his role on April 2, 2018, Dr. Nair has instituted Arcadia UKnighted, a presidential initiative and interactive forum for members of the University community to engage in dialogue and collaborate to enhance Arcadia. Campuswide working sessions established a Budget Task Force, a Shared Governance Committee, and an Aspirational Committee. Over Dr. Nair’s first year at Arcadia, giving totals were up by nearly 10 percent over the previous year, notwithstanding the historic $8.6 million gift from Dr. Ellington Beavers ’93H, realized in December 2018.

In addition to leading Arcadia, Dr. Nair has served on a wide range of university and civic boards and organizations, including as director of the Division for Equity, Inclusion, and Social Justice for NASPA (Student Affairs Administrators in Higher Education). At the 2018 NASPA Conference, Dr. Nair received the Dr. Doris Michiko Ching Shattering the Glass Ceiling award for his impact on the Asian, Pacific Islander, and Desi American community through his leadership, service, and scholarship. In March 2019, NASPA named its Outstanding Allyship Award after President Nair; the award honors individuals who have demonstrated a significant commitment to building bridges, coalition, and allyship for the Asian/Pacific Islander/Desi American community in the student affairs profession and higher education.

Dr. Nair serves on the editorial board of INSIGHT Into Diversity, the oldest and largest diversity publication in higher education. His research interests include quality assurance in educational systems, service learning and civic engagement, and second-generation Asian American identity. Dr. Nair has published articles in media outlets such as the Huffington Post and InsideHigherEd, and has contributed chapters to books including Global Philadelphia: Immigrant Communities Old and New and Contested Issues in Troubled Times.

In July 2020, President Nair was named a Minority Business Leader by the Philadelphia Business Journal. In August, President Nair published “What Failure Can Teach about Leadership” in the Educause Review. The following month, President Nair served as one of four panelists for a Chronicle of Higher Education event, ” What It Takes to Be a Student-Centered Institution Now.”

As issues of systematic racism came to the forefront of communities across the country, Dr. Nair joined thousands of protestors in Glenside and Philadelphia. On June 11, 2020 he laid out a plan that would move Arcadia University forward, and then worked with community leaders to develop measurable outcomes toward those plan goals.

In fall 2019, President Nair spoke with multiple media outlets and with leaders in government and higher education on the importance of increasing diversity in higher education. On Sept. 10, The Philadelphia Inquirer published an op-ed by Dr. Nair, “Higher Education Must Close Its Leadership Diversity Gap,” and the Oct. 8 Chronicle of Higher Education published an extensive interview with President Nair on the topic. As of June 2020, half of the ten members of Arcadia’s President’s Cabinet are people of color, far greater than the national average.

President Nair’s leadership in Arcadia’s JEDI and ABRI efforts have garnered national attention. President Nair is quoted in, and Arcadia is one of 14 college and university case studies in a February 2021 Chronicle of Higher Education special report, “Diversifying Your Campus: Key Insights and Models for Change.” In Fall 2021, President Nair was among the University leadership included in the Chronicle of Higher Education’s Nov. 9 Race on Campus newsletter. The article discusses Arcadia’s JEDI and combating anti-Black Racism initiatives; how the University’s efforts to combat anti-Black racism fall into three categories: personal, professional, and institutional; and that “racial justice for African Americans will translate into a more-just society for all.” The Race on Campus piece follows the Oct. 26 Chronicle webinar, “Advancing Diversity and Inclusion in a Changing Time,” on which President Nair served as a panelist.

Dr. Nair is married to Paayal Nair, a school psychologist and graduate of the Pennsylvania State University and the Philadelphia College of Osteopathic Medicine. They have a son, Krishna Nair, and a daughter, Rani Nair.

Dr. Nair earned a Doctor of Philosophy and a Bachelor of Science from Pennsylvania State University.