It was a raw, cold morning, March 8, but when the sun came up on Arcadia’s campus, there was already a long line of students, teachers, and other community members waiting to catch a glimpse of the Commander in Chief. Some had been waiting all night long.

The campus had been transformed. The parking lots were filled with news team vans, the lawn strewn with television cameras, like birds grazing in the fresh dew. The scene was quiet but energetic, and when the doors of Kuch Center opened at 9 a.m., alums, faculty, students as well as members of the surrounding community were quick to take their spots together in the gymnasium. The chattering began low and grew louder.

The stage was set, the Secret Service men stood alert, and everyone was fixated on the empty podium. It was clear that attendees were from all different belief systems, political parties, and backgrounds. Still, the minute the President of the United States was announced and appeared from behind the curtain, all differences ceased to matter. Everyone had two very important positions: deep respect for the President of the United States and pride in Arcadia University. The chattering dissolved into excited cheers as Obama’s live voice echoed off familiar walls.

Several Arcadians had the privilege of warming up the podium for President Barack Obama on March 8 in Kuch Center.

Arcadia alum Dr. Gregory Turner, who earned a Doctor of Physical Therapy degree in February, was chosen to deliver the invocation because of his dedication to the health care profession. Turner recently received the Jill Sisenwine Berger Physical Therapy Award because he exemplifies the core values of Arcadia’s PT program.

Next to approach the podium was Arcadia Professor of Physical Therapy Dr. Jan Tecklin, PT, M.S., who led the crowd in reciting the Pledge of Allegiance. Tecklin is known internationally for his expertise in physical therapy for cystic fibrosis patients and received the Arcadia University Professor of the Year Award in 2005.

Their “mark” was on the top row of the media riser set aside for Arcadia University’s student media. The student photographer and videographer weren’t just toe-to-toe with each other, they were elbow-to-elbow with local, national, and international media to cover President Barack Obama’s speech on health care. Tower Editor Teresa Barone ’10 also joined print reporters at the press tables in Kuch Center. 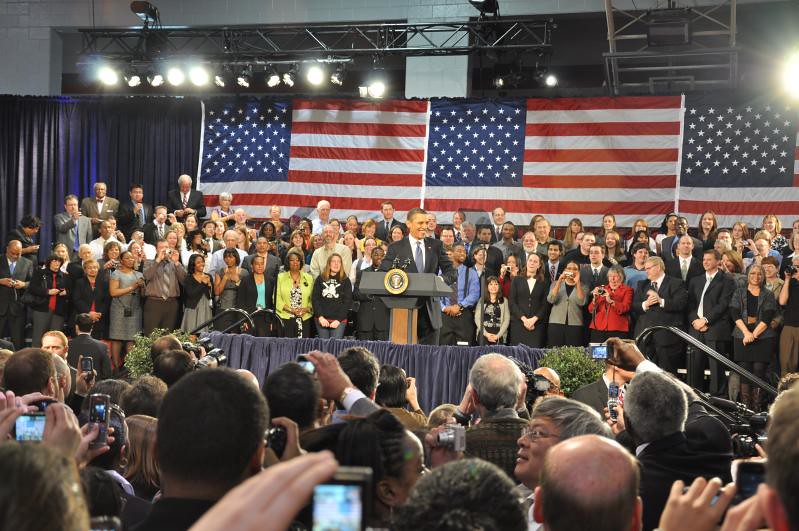 “Seeing the President, as you would expect, was exactly like seeing him on the news, but just the thought that when I looked through the viewfinder of the camera I was using, I was one of the people taping the President of the United States was something I could not get my head around,” says Michael Stackhouse, a first-year student, and president of the AUTV student video club.

Working with Mark Newhouse of MN Productions, Inc., Stackhouse ran the camera that provided the simulcast on the campus cable TV system, AUTV. His video feed also was webcast live. Stackhouse made a special trip to Kuch Center on Sunday to work with Newhouse on learning about the broadcast camera that he would use on Monday.

“We see so many speeches of his on the news throughout the week, but it was amazing to think that he was right there in front of me, standing in the gymnasium of my college,” Stackhouse says.

“I’ve been a photographer for many years, and I never thought I’d be in a position to take photos of the President,” says Jim DiPaolo, a student photographer for works with University Relations. DiPaolo is a transfer student, and his next assignment is to document Italy Preview next week.