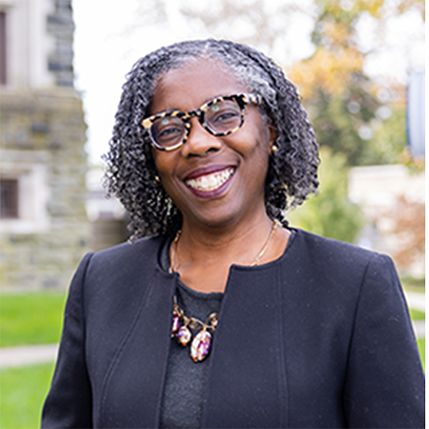 Brigette A. Bryant, a fundraising executive with over three decades of development experience in higher education, joined Arcadia University as vice president for Development and Alumni Engagement on June 3, 2019. At Arcadia, Brigette sets annual and multi-year fundraising targets to increase philanthropic resources for Arcadia, which have resulted in a powerful shift in philanthropic culture.  Successes have included the modernization of the alumni association, the formation of the Beaver College Foundation, completion of a scholarship match initiative, an innovative program that raised a total of $2.45 million for financial aid, as well as two $1 million gifts. Brigette’s professional values make her an effective relationship builder and an architect of strong work-based teams. Before joining Arcadia, Brigette served as founding vice chancellor for University Advancement at the City University of New York, where she was responsible for leading fundraising expansion for the 25-campus university system. Among her highlights are the integration of a faculty and staff giving program with a more successful Giving Tuesday effort, resulting in nearly $1 million in Fiscal Year 2019; drafting gift acceptance policies and principal gift level agreements in support of multi-campus fundraising. During her CUNY-tenure, she secured several major gifts, including a $1 million transfer scholarship for CUNY’s most vulnerable students, and helped to secure a $20 million gift to name the Newmark Graduate School of Journalism and a $7.5 million gift to name the Chazanoff School of Business at the College of Staten Island.  Prior to her work at CUNY, Brigette held chief fundraising roles at Seton Hall University, Tufts University, and Case Western Reserve University, and senior major gift roles at Columbia University, Stony Brook University, and New Jersey Institute of Technology.
Media Mentions
View All Faculty
MENU